MY NTH trip to Dubai was all the more fun because I traveled with my fave band True Faith, Cueshe band, DJ Martin Porta and my son, IC. With all the musical instruments of the two bands that we brought along, IC felt like we were their backup vocalists.

What a blast we all had at True Faith and Cueshe’s concert, “A BAND-erful Christmas,” at Al Nasr Leisureland held on Dec. 4. DJ Martin set the party mood by spinning the dance hits of the ’80s and ’90s.

The festive spirit was very much felt as early as 3 p.m. when the Filipino Christmas bazaar of Awashi Accessories at the venue opened.

The three-in-one-event was a rousing success. Kudos to the cool Pinoy Etihad Airways pilot, Capt. Joey Evangelista, who mounted the concert and my Dubai angel, Jonathan Gulmatico, for making it happen. The revelry intensified since it was a long weekend in celebration of the United Arab Emirates (UAE) 44th National Day/Spirit of the Union. The Arabs have made Pinoys feel so welcome in the UAE, that’s why there are countless kababayan who consider the “City of Gold” their second home. And they came in full force to watch the concert. The crowd went wild when True Faith sang its classic hits, “Perfect,” “Kung OK Lang sa ’Yo, “Huwag na Lang Kaya,” “Dahil Ikaw” (which was one of the songs featured in AlDub’s “Eat Bulaga: Sa Tamang Panahon” TV special) and many more.

Cueshe also regaled the audience with its signature songs, “Stay,” “Sorry,” “Ulan,” “Bakit,” to name a few. It felt like we were in a karaoke bar alfresco as the fans hummed in unison with the bands. The concert served as the Pinoy OFWs’ antidote to homesickness especially this Christmas season. The band members were mobbed after the show and the fans got the thrill of their lives when their idols gamely posed for selfies with them and signed autographs. 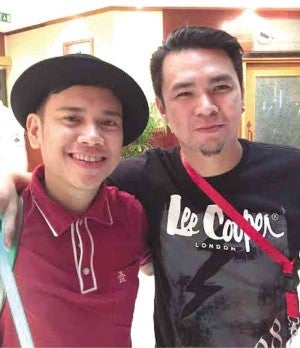 Then, we partied till the wee hours of the morning at the hip Kita Kits Club in our official residence in UAE, Marco Polo Hotel. Arriba in Arabia!

Bravo True Faith and Cueshe for keeping OPM (original Pilipino music) alive in the hearts of Filipinos. Their songs give OFWs a piece of home wherever their journey takes them.

Shukran (Thank you), Dubai, for taking Pinoys in your arms—loving arms and not arms for war. The world is better as a playground than a battleground. Let True Faith and Cueshe’s music say the rest.

What’s the difference between performing for Pinoys abroad and for those back home?

M: Both are enthusiastic and receptive, but Pinoys abroad exude that extra adoration for OPM. It makes them nostalgic and makes living overseas bearable.

R: Pinoys abroad are hungrier for OPM, especially when they idolize the artist who’s performing. Some even drove three hours just to get to Dubai to watch our concert.

M: We will be launching the music video of our new single, “Paano Ka Magiging Akin.” In May, we have a concert tour in London and Ireland.

R: We won’t stop making songs for our fans, so they will have new songs to sing along to with matching hugot lines in the lyrics.

If you were to compose a song for the 2016 presidential elections, what would the title be?

What’s the secret of your band’s staying power?

M: We like being ourselves—onstage, offstage and in the recording studio. I guess that makes us more grounded. Plus, we love music and our passion for it keeps us in the biz. Oh, and [helps pay] the bills, too. (Laughs)

R: We take our band seriously. Our patience, discipline and passion for music keep us in the loop. It’s like we are addicted to our craft in a good way.