entertainment /
‘IN THE SPIRIT OF CHRISTMAS’ 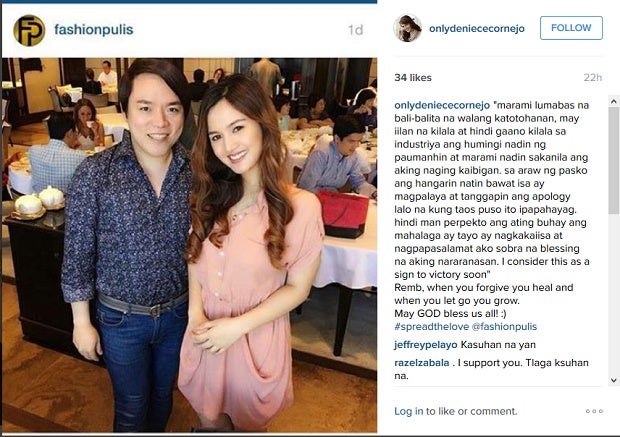 In a statement sent to INQUIRER.net on Saturday, lawyer Ferdinand Topacio, legal counsel of Cornejo, said that his client and Lim “have come to terms” on the cyber libel filed by the former.

“As legal counsel of the lovely Ms. Deniece Cornejo, I confirm that my client and Mr. Michael Sy Lim, a.k.a Fashion Pulis, have come to terms regarding the subject of a [cyber libel] case filed by my client against Mr. Sy, who has publicly apologized and [whose] apology was accepted by Ms. Cornejo, in the spirit of the season. Part of the agreement was that my client would cause the withdrawal of the criminal complaint against Mr. Sy. They have also agreed henceforth to become friends,” Topacio said in a statement.

He said that Cornejo’s camp demanded nothing from Sy except for his “sincere apology.”

“Rest assured that we demanded nothing [from] Mr. Sy other than his sincere apology because AN APOLOGY IS PRICELESS. We also believe that it is better to forgive than to receive,” he said.

“In the spirit of Christmas, @onlydeniececornejo and I have decided to put our differences behind us. To Deniece, my apologies if I hurt ur feelings because of my post. I want you to know that I had no such intention. I was just doing my job. #spreadthelove,” the post read.

Cornejo also posted a photo on her Instagram account with Lim, saying she has accepted Lim’s apology.

“Remb, when you forgive you heal and when you let go you grow,” Cornejo said.

Last August, Lim was arrested by authorities over a libel complaint filed by the camp of Cornejo. Lim posted on his blog alleged medical records of Cornejo, saying the actress-model has a sexually transmitted disease. NC/RAM