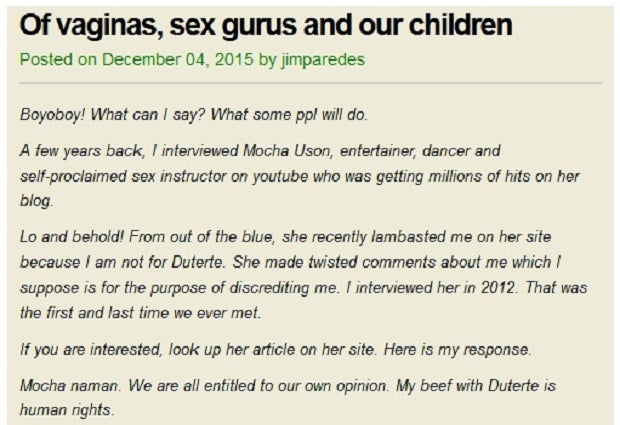 Musician Jim Paredes hit back at singer-dancer Mocha Uson for “twisting” stories aimed at discrediting him.

“She made twisted comments about me which I suppose is for the purpose of discrediting me,” Paredes said in his blogpost.

Paredes was reacting to the statement of Uson lambasting him for airing his anti-Duterte stand.

“We are all entitled to our own opinion. My beef with Duterte is human rights,” he said in a blogpost.

Uson and her all-girl singing and dancing group “Mocha Girls” earlier vowed their support for Davao City Mayor Rodrigo Duterte’s presidential bid, saying they were willing to end their career if that would help Duterte win the presidency.

“I just can’t believe what I read about a blog of an OPM artist bashing Duterte calling him a very immoral person,” Uson said in her post.

She said the OPM artist, who she did not name, “was hitting so hard about the immorality “ of Duterte, which made her “enraged.”

The sexy dancer then recalled an interview she had with the OPM artist in 2012.

She revealed that during the interview, she was “really shocked” because the questions were all about sex and not about their group.

She said the OPM artist asked her questions like “Gaano ka ba ka-libog? (How lustful are you?)”

“I was really shocked because this OPM Artist has an image of being a patriotic family man. I was disappointed and left in disbelief. I never told anyone about this. I just kept it to myself thinking maybe he was just carried away by his own lust,” she said.

He admitted that he had interviewed Uson in 2012.

“Yes, my interview with you was largely about your sexual persona and you knew it was about that prior to the interview,” he said.

“You volunteered a lot of lurid info even without my asking. You like sex and you are proud to be an advocate of free sex. Nothing wrong with that,” he added.

“I honestly can’t remember. I can look for the audio. You were very candid, almost bragging,” Paredes said.

Based from the interview and how Uson reacted, Paredes said the sexy singer was now exaggerating her reaction.

“I think you are exaggerating your reaction. You are certainly not a blushing flower,” he said.

He then assailed Uson, saying it’s “darn cheap” to twist things just because they have political differences.

“I think [it’s] pretty darn cheap of you to twist things just because you hate my politics. Labo nun. (That’s obscure.) I treated [you] with great respect. I did no harm to you. I will post the article if you wish. Let me find it,” he said. 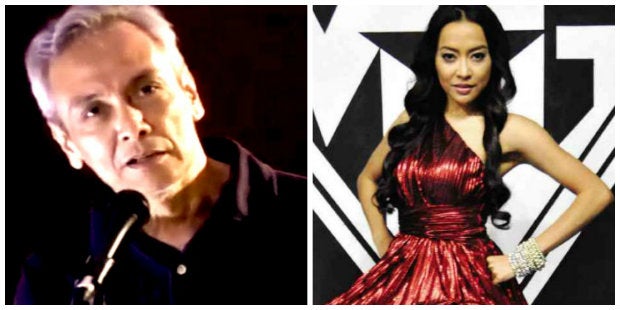