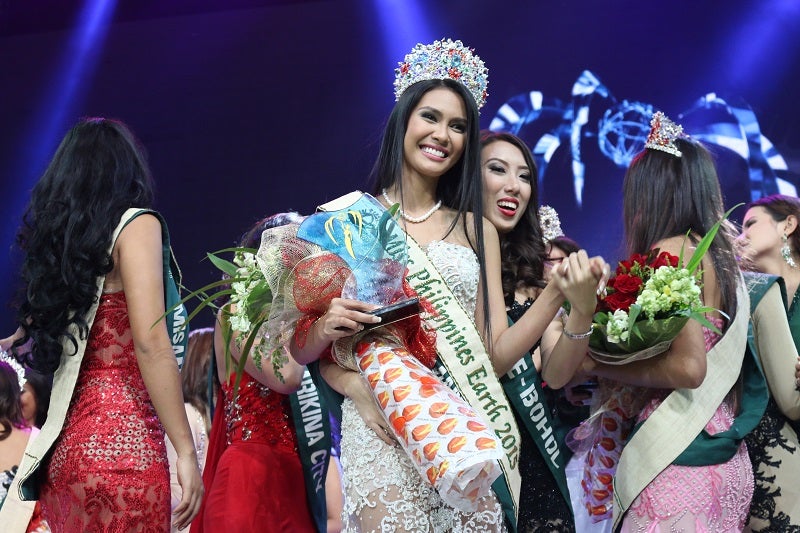 Miss Philippines-Earth Angelia Ong (center) will represent the country at the 2015 Miss Earth pageant in Vienna, Austria, on Dec. 5 (Dec. 6 in Manila).

The Philippine-based Miss Earth pageant is taking a huge leap for its 15th year as it stages the 2015 edition of the global tilt in Vienna, Austria.

“This is a big thing, especially for a home-grown pageant like ours,” said Peachy Veneracion, project director of local pageant organizer Carousel Productions, at the send-off press conference for Miss Philippines-Earth Angelia Ong at Remington Hotel’s House Manila club in Pasay City recently.

“This is the Lord’s blessing, God’s blessing for our hard work,” continued Veneracion.

Although not the first time for the Philippine-based global tilt to leave the country’s shores, Veneracion trumpeted this year’s edition because “Austria is a first world country, ecotourism friendly. It promotes sustainable living, aware of climate change. It is perfect for Miss Earth.”

The pageant’s 2010 edition was staged at the Vinpearl Auditorium in Nha Trang, Vietnam.

It was supposed to be held in Bangkok, Thailand, in 2011. But massive floods in the nation’s capital compelled organizers to bring the contest back home to the Philippines.

Veneracion revealed that several other countries expressed interest in holding the Miss Earth pageant’s recent editions, but the deals did not push through.

But now that Austria secured the hosting rights for the pageant’s crystal-year celebration, she said even more countries are sending feelers to have the Miss Earth pageant staged in their countries.

For the Vienna gig, Veneracion said “everything just fell into place.”

Carousel did not initially plan to have developments as grand as this for the 2015 edition, but the organizers see it as a pleasant surprise.

“It’s just perfect that we’re going to be held in Vienna for our 15th year. It’s incredible, I cannot even explain our feelings as organizers,” shared Veneracion.

But Ong is as excited for the Vienna pageant as the organizers. The national beauty titlist is out to prove that the Philippines can secure a victory even if the Miss Earth pageant is staged in another country.

The Philippines’ two Miss Earth titleholders Karla Paula Henry and Jamie Herrell were both crowned in the Philippines, while Psychee Resus missed the cut in 2010 in Vietnam.

“I’m really focused on getting that crown, the first back-to-back win for the Philippines in Miss Earth,” Ong told Inquirer Entertainment.

“As much as possible, I don’t read comments online. I just focused to work on my weaknesses so I can be more prepared. This Filipina heart is willing to fight, and I’m gonna make sure to give the other delegates a difficult battle,” added Ong.

To prepare for the international arena, Ong put her studies on hold. She is three units shy of earning a marketing management degree at De La Salle-College of Saint Benilde in Manila.

“The crown deserves to go to the Philippines again. I have the right mind and spirit, and I’m ready to face the challenges that come with the crown. I believe I’m the right person to inspire and educate people on how they can help preserve and protect the environment,” declared Ong.

The 25-year-old beauty also hopes to bag the crown as a platform to participate in the United Nations Climate Change Conference in Paris, slated from Nov. 30 to Dec. 11.

“We planted 21 trees on Nov. 9 to serve as a countdown for the Climate Change Conference. If the Lord grants me the crown, I am willing to take part in the biggest conference on climate change. It’s also the theme of the Miss Earth 2015,” explained Ong.

Carousel Productions executive vice president Lorraine Schuck had a brief audience with UN officials in September to discuss the Miss Earth pageant. She was joined by Herrell.

Representatives from 90 countries and territories are participating in the 2015 Miss Earth pageant, which will culminate at the Marx Halle in Vienna on Dec. 5 (Dec. 6 in Manila).