A marked role for Andi in ‘Angela Markado’ remake

A RIVETING story is worth retelling. Just like “Angela Markado,” a blockbuster komiks serial of Carlo J. Caparas directed by Lino Brocka which bagged the grand prize at the prestigious Festival des 3 Continents in Nantes, France, in 1984. It centers on a young woman who has been emboldened by the tragedies and traumas she had to endure, such as rape and the death of her loved ones. Director nonpareil Carlo J will bring “Angela Markado” back to life with a different treatment that will shock and entertain moviegoers from start to finish.

The movie, which is a joint venture of Viva Films and Oro de Siete Productions, opens on Dec. 2. No other young actress can portray a vengeful, brutal role with as much chutzpah as Andi Eigenmann. Being a master of his craft, Direk Carlo believes that “Angela Markado” will catapult Andi to superstardom. I can almost hear my good friend, Ralph (aka Mark Gil, the late dad of Andi), applauding from up above.

Here’s my one-on-one with Andi.

How did you prepare for such a challenging role as Angela Markado?

I trained for MMA (mixed martial arts) at Ultimate Fitness more often than I would normally do, creating a whole new persona to bring to life Angela, and immersing myself in the character and whatever else that was asked of me.

What can women learn from “Angela Markado?”

“Angela Markado” is a film that spreads awareness of the social issue of rape/kidnapping that has been… [plaguing] our country for ages. It also sheds light on [the issue of] Filipino teen [depression]. It’s not just a film to help teenagers become more aware of this issue but also for parents, and others to be more open to something like this and probably start being able to prevent it and help these victims as well.

What was the toughest scene to shoot?

Toughest would have to be the rape-torture scene, which we had to work on for about a week’s worth of filming. It was the toughest in the sense that it required the most from me emotionally, and being the main theme of the film, I wanted to make sure I would give it my all.

How did Direk Carlo motivate you?

Direk Carlo would literally just pull me aside and talk to me about whatever he wants to get out of me for certain scenes, whenever he feels it would be necessary. But other than that, he would respect us all as artists and let us do it the way we see fit.

Tell us the latest about your baby, Ellie.

Ellie just turned 4. She loves going to school and learning. She can write her name now!

What kind of guy would make you fall in love again? 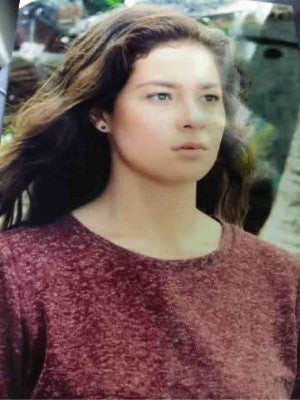 Someone who… can go as shallow as being a goofball with me. Someone who has the same outlook on life as I do, I guess. My criteria has changed so much over the years and after all that I’ve been through, now, all I want is someone we (Ellie and I) could enjoy life with.

How would you describe your friendship with Albie Casiño these days?

Would you be willing to work with Albie?

Aside from acting prowess, what are the distinct qualities of an Eigenmann?

Aside from literally all of us being artists, an Eigenmann is usually independent, unconventional, candid, free-spirited, but the most loving human being you will meet in your life.

What’s the best and the hardest parts of being the daughter and niece of show biz icons?

Best part is being able to get a glimpse of how such talented household names work as artists, and learn from them! Hardest part? Artists are cray cray (slang for crazy)! (Laughs)

What is the craziest thing you did with your dad?

We would normally spend my growing-up years either at the beach trying out new activities, but mostly talking about everything we wanted to be able to do together.