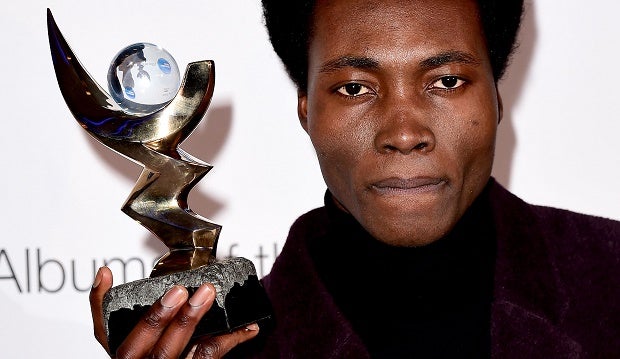 Benjamin Clementine who is announced as the winner of the Mercury Prize for his album At Least For Now, at the Mercury Music Prize awards event hosted at BBC Broadcasting House in London, Friday Nov. 20, 2015. Clementine is a British-French poet, composer and musician. PA via AP

LONDON, United Kingdom—Benjamin Clementine, the experimental singer and poet with deep roots in Paris, on Friday won Britain’s Mercury Prize and dedicated the award to the attack-stricken city.

The 26-year-old, who was born in London but spent years in the French capital as a street musician, beat out veteran artists with his debut album “At Least For Now.”

Clementine offered his award to Paris, which a week earlier was hit by coordinated attacks that killed 130 people, but broke down in tears as he spoke.

“I know this is about music, but I dedicate it to what happened about four or five days ago in Paris,” he said in a quiet voice as he expressed surprise at winning.

The Mercury Prize, which has often served as a critical boost for up-and-coming artists, is awarded each year by the music industry to the album judged to be the best in Britain or Ireland.

Clementine won over 11 other nominees who included Florence and the Machine, the theatrical but introspective rockers who have become coveted festival headliners, and the innovative electronic composer Aphex Twin.

Clementine is known for his powerful, high-pitched voice and highly poetic lyrics, with a crowd-rousing delivery that has brought comparisons to Nina Simone.

The singer moved at age 19 to Paris, where he would play, and often sleep, on the streets and gradually developed a performance style that defies traditional song structure.

Ahead of the award ceremony, Clementine told the BBC that he had traveled to Paris the day after the attacks to commiserate.

“That’s how I felt—like a part of my family had been stolen from me.”

PH lights up in solidarity with Paris, rest of the world