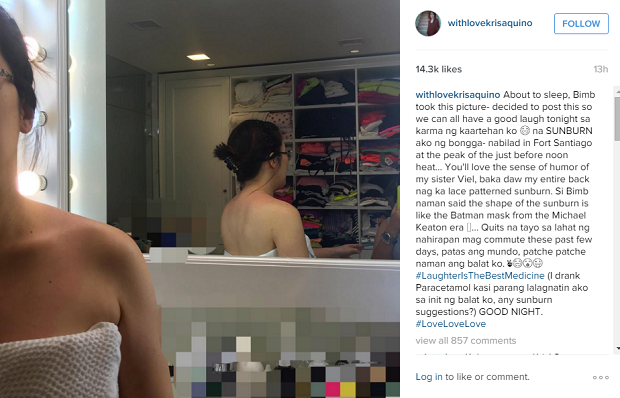 Host-actress and presidential sister Kris Aquino took to Instagram to share a photo of her sunburnt skin, which she said she acquired after touring the spouses of the Asia-Pacific Economic Cooperation (Apec) leaders at Fort Santiago in Manila.

“About to sleep, Bimb took this picture- decided to post this so we can all have a good laugh tonight sa karma ng kaartehan ko. na SUNBURN ako ng bongga- nabilad in Fort Santiago at the peak of the just before noon heat,” Kris said on a post late Thursday night.

(About to sleep, Bimb took this picture- decided to post this so we can all have a good laugh tonight because of the karma [force that determines a person’s fate based on previous actions] due to being fussy. I was SUNBURNT because I was exposed to the sun in Fort Santiago at the peak of the just before noon heat.)

“You’ll love the sense of humor of my sister Viel, baka daw (she said it is probable that) my entire back nag ka (had a) lace patterned sunburn. Si Bimb naman (on the other hand) said the shape of the sunburn is like the Batman mask from the Michael Keaton era,” she added.

Kris called it “quits” with thousands of inconvenienced commuters in the capital city who were forced to walk under the scorching heat of the sun due to road closures near the venue of the Apec summit.

READ: Thousands walked 4 kilometers to work, in over an hour, due to APEC road closure

(Let us call it quits with those who found it difficult to commute these past few days, the world is fair, my skin has patches on it.)

Mimicking Aquino’s post, Bayan Secretary General Renato Reyes Jr. also shared a photo of his sunburnt skin on Facebook, noting that his case was different as he was not a millionaire who belonged to a wealthy political clan.

(There. I have sunburnt skin because I joined the rally. Let us call it quits. Wait… I did not come from a clan of millionaire. We are not on the side of politics either. We will continue to suffer traffic and pollution after APEC. Nope. Not the same.)

Kris, who wore a modern Filipiniana designed by Michael Leyva, was joined by her sisters in touring the spouses of Apec leaders in “A Walk Through Time” in Intramuros, Manila. YG/RAM

Woman gives birth on the road at height of traffic jam