The greatest hits with CHICAGO live in Manila 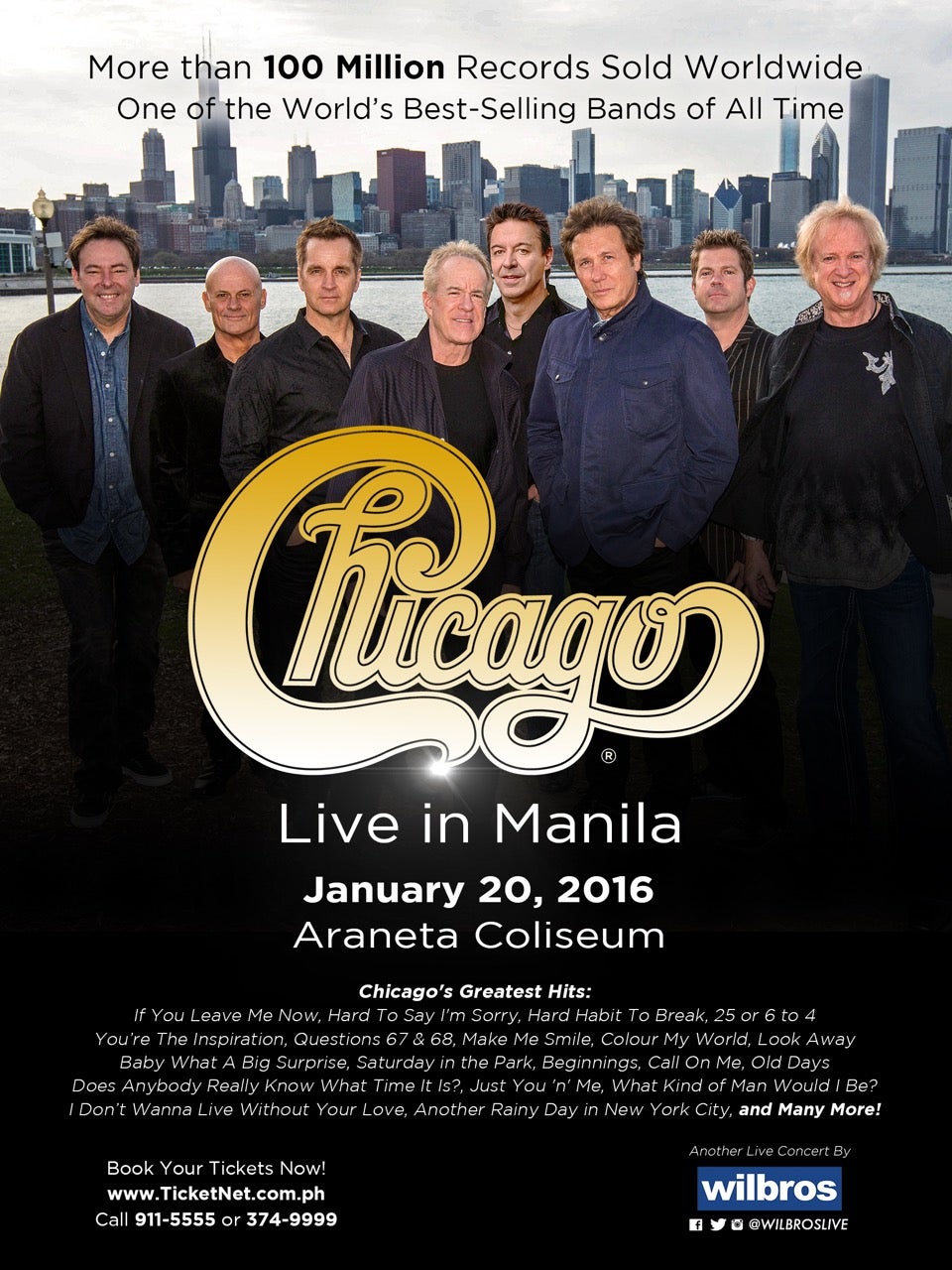 Considered one of the longest running and most successful pop/rock ‘n’ roll groups in history, Chicago is the highest charting American band in Billboard Magazine’s list of Top 100 artists of all time, coming in at #13, and they are coming to Manila for their Greatest Hits Tour on January 20, 2016 at the Araneta Coliseum.

Lifetime achievements include a Grammy Award, multiple American Music Awards, elected as Founding Artists to the John F. Kennedy Center for the Performing Arts, a Star on the Hollywood Walk of Fame, a Chicago street dedicated in their honor, and Keys to and Proclamations from an impressive list of US cities.

Formed in 1967 in Chicago, the “legendary rock band with horns” released their first album “Chicago Transit Authority” in 1969. Since then, they have had record sales top the 100,000,000 mark, and include 21 Top 10 singles, 5 consecutive Number One albums, 11 Number One singles and 5 Gold singles. An incredible 25 of their 36 albums have been certified platinum, and the band has a total of 47 gold and platinum awards. Among their most successful songs, which Filipinos consider endearing over the years, are “If You Leave Me Now”, “Hard To Say I’m Sorry”, “Look Away”, “You’re The Inspiration”, “Hard Habit To Break”, “25 or 6 to 4”, “Saturday in the Park”, “Colour My World”, “Beginnings”, “Just You ‘N’ Me”, “I Don’t Wanna Love Without Your Love”, “Baby, What A Big Surprise” and “What Kind of Man I Would Be?”.

In 2014, their debut album “The Chicago Transit Authority” was inducted into the Grammy Hall of Fame. This was followed by announcement of their 2014 summer tour with REO Speedwagon, a televised performance on the 2014 Grammy Awards CBS broadcast, and the release of “NOW” Chicago XXXVI in July 2014.

Today, decades after they gathered at Parazaider’s apartment, the members of Chicago continue the legacy of music they inherited from their parents and their teachers and that they have brought to millions of fans.

Going to see this legendary band perform their greatest and well-loved hits is the best way to celebrate the start of 2016 – come see Chicago: Live in Manila. Presented by Wilbros Live, tickets will be available beginning November 27 via TicketNet.com.ph or call 911-5555.