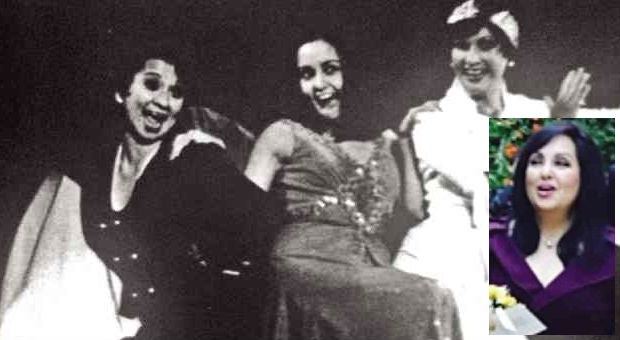 LOS ANGELES—Since her concert this weekend is titled “ReminiSing with Becca Godinez,” we asked the performer to reminisce about her 43 years so far in show business. She graciously obliged with candid, colorful recollections of her times in theater, television, recording and concert stage.

From Manila, Becca went to live with then-husband, singer Morris Albert, in Rio de Janeiro, then onto the Los Angeles area, where she’s been based since 1987. She is married to Benito Miranda, a Filipino-American community leader and regional manager in senior insurance.

Benito and Morris are good friends, as wonderfully captured in a photo of the two men with Becca at last year’s wedding of Tasha, her daughter with the Brazilian singer-composer.

Looking as bright and fresh as when we first met her in the early 1980s, Becca began her professional life very early in 1972 “as a singer of radio jingles with Ed Gatchalian.” She exclaimed, “I got paid even!”

She added, “He heard me sing on his business trip to Mangagoy, Bislig, Surigao del Sur. When we moved to Manila, he was a man of his word, and I began singing for radio jingles. I was a kid with ‘milk’ behind my ears, but I knew even then that it was right. I was the baby of the group, but my dad trusted him and his family.”

What are the three moments in your life as a performer that you are proudest of to this day?

The first was during my first professional venture into musical theater. Heck, it was my first ever theatrical performance. I was cast as a seamstress in “West Side Story in Rock,” at the Cultural Center of the Philippines (CCP).

It was 1972, and rehearsals alone were already exciting. Martial law had been declared, and we were packed into a dance studio that had an open wall. Every day, there were armed guards on the rooftop of a building across from where we were gathered, making certain we were not plotting anything other than stage blocking.

Nick Lizaso, the director, asked me to understudy both lead roles of Maria and Anita when either of the lead actresses was unable to rehearse.

On the final afternoon before the evening performance, as we, the cast, were all seated outside the CCP artists’ entrance, someone tapped my shoulders from behind. It was Nick, and he said, “Get dressed, you will perform the role of Anita tonight.”

Co-actor Bernardo Bernardo gathered the Jets (the rival gang) and in the lobby between the dressing rooms, we quickly rehearsed the choreography.

At the end of my last line, I ran offstage dramatically. Two actors picked me up and set me on their shoulders, walked me offstage and the cast hollered to show how pleased they were with me. During curtain call, the cast stood up as I took my bow.

Second: I auditioned for that same role (Anita) three years later, as a student of Theatre Arts in California. I was up against many other girls for the part.

My dad and mom had flown in from Manila to visit. The tentative cast call on the final day didn’t include me… [but later] my name was announced as a last-minute call in.

Final casting was going to be announced at 9 that night. A co-actor told me to go home and spend time with my parents, and he would call me to say who got cast. Nine p.m. came and went—10… 11… No call.

I cried and went to sleep. At about 1:30 a.m., my uncle said, “You got Anita!” I screamed. The household woke up, and we celebrated. That musical was the talk of the season. We had SRO crowds and standing ovations each night. One critic wrote, “Fullerton Play Spots Filipina.”

Neck and neck on this third one: Performing as a pop singer/songwriter and front act for Henry Mancini at the Folk Arts Theater. Mancini said that he would come to see me, and I took it as the usual soft promise by an important person to a fledgling. But come to watch me, he did.

Then, there’s Aying in “Flipzoids.” It was an honor to create her, portray her and to have been given the opportunity to go back to acting after a 30-year absence.

Name the five people who made the most impact on your professional career and why.

My dad, who early on taught me how to read contracts, reminded me to keep my integrity.

He added that I must respect my audience and always … [put my] best foot forward.

Boss Vic del Rosario of Vicor Records, who plucked me out of a slew of unknowns … created a pop artist fresh from being a theater geek.

It was through his company that I learned about production, budgets, marketing, PR and what it takes to push talent. I have two gold records.

Morris Albert—for pushing me and teaching me to finish songs.

Zeneida “Bibot” Amador. She knew my resolve to study—she pulled me to study the Greeks and Shakespeare. When it was time to justify leaving Manila for the US to study, it was her influential letter that helped me to gain a stamp of approval from the US Embassy.

Jesus Christ. Truly, I cannot imagine my life’s journey without Him. I hang on, hold on to, listen to, find strength, compassion, passion, direction, peace, wisdom and patience from Him.

If you did not succeed as a performer, what would you be doing today?

Oh, I would absolutely be in some geological dig out in some desert or remote land, spending hours trying to find a sliver or shard of some item of historic importance. Or, I would be a member of that TV show, “History Detectives.”

What are your five biggest regrets in your personal and professional life?

Hmm, in my personal life, there are none. Time has allowed me to view the entire horizon. Time has been my friend. Even the most painful divorce from Morris no longer sends pangs of hurt. We have aired our lives out, washed the dirt off and we are the best of friends. We speak at least twice a week. What’s best is that “Mo” and Benito are great friends.

Professionally, I sometimes think I should not have just disappeared from the scene in Manila the way I did.

Which OPM songs did you wish you had sung originally?