Tony-winning play is coming to Manila 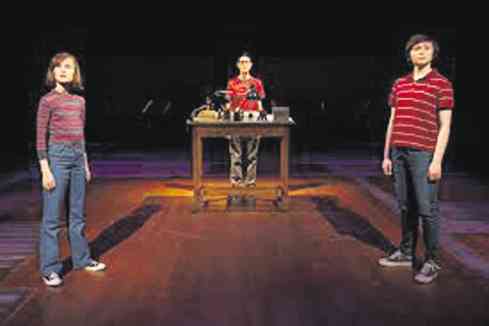 NEW YORK—During a brief visit to the Big Apple in June for “Allegiance”-related events, I spent a few nights at the theater. One of those evenings was spent at the Circle in the Square Theater, where “Fun Home,” the 2015 Tony winner for best musical was playing, and continues to play.

Starring Tony winner Michael Cerveris and Tony nominees Judy Kuhn and Sydney Lucas (also the youngest Obie award recipient ever for her role as Small Alison in the off-Broadway production of “Fun Home”), this musical based on the graphic novel of the same name by Alison Bechdel is an emotional roller coaster.

It tells the story of the Bechdels, whose patriarch Bruce is the director of the family’s funeral home (hence the name of the musical, a more whimsical and “fun” take on the family business).

Bruce, it turns out, is a closeted gay man, a situation that sends the lives of his long-suffering wife Helen and their three children Alison, John and Christian upside down. Everyone in the theater was in tears at the curtain call (yours truly included), and rewarded the cast with a standing ovation. I don’t recall a musical having that kind of effect. No big dance numbers, no large cast. Just a story about a family and its unique brand of dysfunction so specific, we all could find something to relate to.

Well, allow me to be one of the first to announce that “Fun Home” will be coming to Manila in late 2016, thanks to Atlantis Theatrical Entertainment Group, the same people bringing in “The Bridges of Madison County” this year (opening tomorrow!), and whose other credits include productions like “Shrek” and “Saturday Night Fever.”

Allow me to also announce that I will be playing Helen Bechdel. And that “Fun Home’s” creators, Jeanine Tesori and Lisa Kron, will be coming to Manila as well!

There will be auditions for the various roles in “Fun Home,” children included. Find the breakdown for these kids below:

Small Alison—Alison Bechdel as a child, around 8 years old when we meet her. Precocious and opinionated. On the cusp of finding herself and forming her own views on how a girl her age should behave and dress. Seeking an actress who is confident and intelligent. Must be a strong singer who can move seamlessly in vocal quality from speech to song, natural sound.

Christian Bechdel—Alison’s older brother, around 10 years old when we meet him. As the oldest of the three children, he strives to be the leader, but is sometimes overshadowed by Alison’s strong personality. Seeking a singer (pre-pubescent) with a natural sound, good sense of harmony and pitch.

John Bechdel—Alison’s younger brother, around 6 years old when we meet him. Like most boys his age, he is full of energy with a quirky imagination. Looks up to his siblings. Seeking a singer with a natural sound, good sense of harmony and pitch.

Now for the grownups, all of whom need to be strong singers that move seamlessly from speech to song, and with wide ranges:

Alison—Alison Bechdel in her mid-30s to 40s. The narrator of this story. Now a self-aware adult, she is able to reflect insightfully on her own life and her relationship with her father before his tragic death.

Medium Alison (Early to mid-20s to play 19)—Alison Bechdel as a freshman at Oberlin College, discovering her sexuality. For an incredibly well-read, hyper-intelligent teenager, her uncertainty about who she is makes her socially awkward at times.

Bruce—Alison’s father. A high school English teacher and funeral home director, who spends his spare time on the historic restoration of his home. A complex man with a hot temper as a result of years of repression. He can be caring and attentive to his children but is also quick to anger.

Roy/Pete/Mark/Bobby Jeremy—Roy, a young man Bruce hires to do yard work; Pete, a mourner who visits the funeral home; Mark, a high school junior; Bobby Jeremy, the lead singer of a band in Alison’s imagination.

Joan—A student at Oberlin. She exudes a confident, sexual energy, with a dry sense of humor. Unlike Alison, Joan is very comfortable in her skin and openly identifies as a lesbian.

The play is looking for kids ages 8 to 13 years old, and grown ups ages 20 to 45 years old who sing, move and act well, and are proficient in the English language.

Prepare a musical theater song (minus one or music sheet … pianist will be provided), and bring along a current photo and résumé.