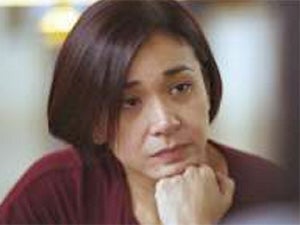 Most netizens on Twitter and Facebook who have watched the video went bonkers on how the interview turned out. On Sunday night, it was the fifth trending topic on Twitter in the Philippines.

“Karen Davila was my critic teacher. Alma Moreno was me when I had no enough sleep yet had not made any progress on my lesson plan,“ posted @sharpizza on Twitter.

“Nothing more awkward than the Alma Moreno interview,” said @nightingjaze.

Moreno is running for senator under the United Nationalist Alliance led by Vice President and presidential aspirant Jejomar Binay. She said in the interview that she asked for signs on whether she would run for Senate as it was not initially a part of her plans.

Things started to turn uncomfortable during the interview when Davila asked for Moreno’s advocacy.

The host said, “But then the law exists already.”

When asked about the reproductive health law, Moreno said she supports it but with reservations. When grilled further, she said: “Kailangan pa ba sagutin yan? (Do I need to answer that?)” The host answered:” Of course you’re running for the Senate.”

“Kasi talaga ang mahihirap dapat mag kontrol kasi lalong naghihirap pag maraming anak (The poor should control themselves otherwise they’ll get poorer if they have more children),” Moreno said, to which Davila asked: “How would they control?”

“Kailangan bukas ang ilaw? (Lights should be turned on?)” Moreno said in jest.

Other netizens, meanwhile,  were sympathetic to Moreno.

“I pity Ms. Alma Moreno for this embarrassing interview with Ms. Karen Davila. She obviously has no idea what she’s getting herself into. The least she could’ve done is research and study before getting grilled. She must’ve been given a copy of the questions beforehand anyway. She’s no a political neophyte either to humiliate herself like this,” said a certain Jayr Villegas on Facebook.

“Karen Davila, when your guests speaks in Pilipino, you should adjust your questions to the language of your guest. Your body language is so negative! (Crossed arms and legs). I am not in favor of Alma’s senatorial run and I will never ever vote for her but please, be a gracious host. Your tone is very antagonistic,” posted Minty Salonga.

In the same interview, Moreno said she is also not into supporting the pending anti-political dynasty bill as long as family members who are on different government positions are doing their job right.

When asked what she thinks of Binay, Moreno said she believed that Binay is not guilty of corruption allegations.

(They’re not yet proved in the judiciary. There’s no guilty verdict. Let the judiciary do the judging. As for me, I believe he can be a President because he knows the pulse of the nation.) TVJ