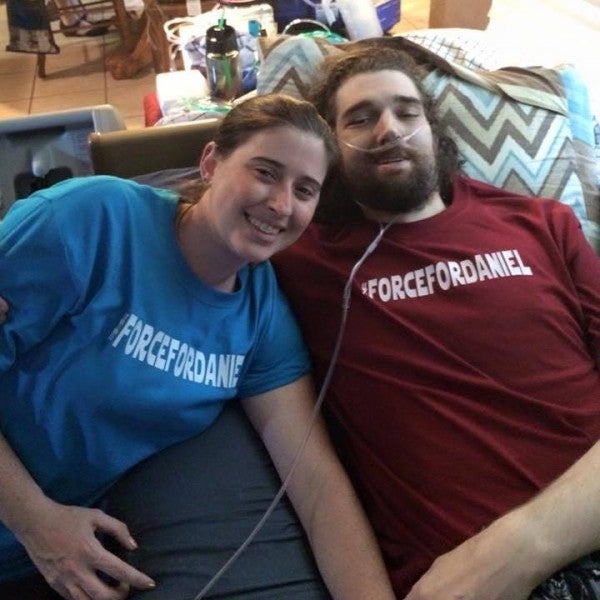 An online campaign in support of the 32-year-old cancer patient Daniel Fleetwood, went viral after drawing the attention of Mark Hamill — who plays Luke Skywalker — and John Boyega, who plays lead character Finn in the upcoming “The Force Awakens.”

Star Wars director J.J. Abrams called Fleetwood to arrange a screening at his home in Texas on Thursday, where he was receiving hospice care. Two days earlier doctors had told the lifelong Star Wars fan that his lungs were 90 percent filled with cancer.

“Daniel put up an amazing fight to the very end. He is now one with God and with the force,” his wife Ashley Fleetwood, wrote on Facebook in the early hours of Tuesday, after giving a blow by blow account of his final hours.

“He passed in his sleep and in peace. He will always be my idol and my hero.”

Early Tuesday morning, she shared a final selfie taken with her husband, showing the couple smiling and holding hands in “Force for Daniel” t-shirts.

Fleetwood, who suffered from a rare form of connective tissue cancer, had been a fan since he was eight or nine years old.

His doctors told him in July that he only had a couple of months left to live, but he said his desire to see the new Star Wars movie, set for release in December, was helping him hold on.

On Saturday, a group of Star Wars fans visited his home in fantastic costumes — storm troopers, Jedi knights, and more — and induced Fleetwood into their “Star Garrison 501st Legion.”

Ashley Fleetwood’s public Facebook feed is filled with pictures and videos of “Force for Daniel” memes, handwritten letters and even t-shirts sent by strangers who had heard his story.

“In the amazing typical Disney way, they really do make dreams come true,” she wrote on Facebook after the pair watched an unfinished version of the film.

“I feel a weight has been lifted for me by knowing he got his final wish,” she added the next morning. “Thank you again!”