Maine and Alden after ‘AlDub’ 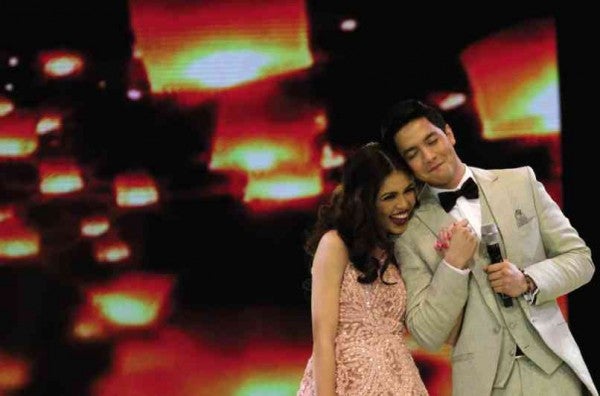 ALDUB. Their tandem’s ongoing progression is key to its long-term possibilities.

For three remarkable months now, the unexpectedly hit romantic tandem of Alden Richards and Maine Mendoza has been dominating the noontime TV ratings on its “kalyeserye” portion on “Eat Bulaga.”

Their unprecedented success has led, not just to instant stardom for Maine, but also to renewed popularity for Alden, whose show biz career was at relative loose ends after a couple of his TV drama starrers failed to fly.

But, the “AlDub” phenomenon has changed all that, so both Alden and Maine are now on a roll, not just on “Eat Bulaga,” but also as suddenly in-demand product endorsers.

The commercials they’ve been doing for a number of products have further enhanced their visibility on the tube—and they are slated to costar in a Vic Sotto comedy for the Metro Manila Film Festival late next month.

However, the time will have to come when their “kalyeserye” shall have finally overstayed its welcome, so the big, P64,000 question is being asked now: What will Maine and Alden do after the “AlDub” phenomenon shall have run its course?

If their tandem continues to be blessed by the show biz gods, they would already be popular enough to go for long-term stardom. Thus, the most logical next step would be for their tandem to topbill a daily teleserye or weekly sitcom. We suspect that such a follow-up show is already being conceptualized, or actually scripted.

If their MMFF film with Vic Sotto clicks with viewers, more movies could also be in the works for them. And, given the fact that their commercials are top earners for their smiling sponsors, the “AlDub” tandem could profitably be tapped to endorse many more products and services, starting this Yuletide season for gifting and feasting!

On the other hand, the phenomenon could turn out to be less than permanently potent if viewers get sated with Maine and Alden’s romantic antics—due to overexposure! So, they and their handlers have to be extra-careful about how their popularity will be used (not abused) in the next, few weeks!

Another possible impediment could be viewers’ discovery that what the new tandem has to offer is too limited, just a one-note samba or a solitary running gag—that could finally overstay its welcome due to its thinness.

That’s why, this early, Maine and Alden, together but also separately, should add to their repertoire of performing skills and styles!

As far as that goes, some changes on their hit format and “formula” are already being made: For instance, Maine is no longer silent, she’s actually being allowed to ad-lib on their kalyeserye.

In addition, the once “forbidden” lovers are no longer being kept physically apart—they can now touch, and even hug! Will the changes diminish the mystery and verboten appeal of their love story? We shall soon see.

Will a speaking Maine be as or more diverting than the scrupulously silent one? That depends on how good she turns out to be as an ad-libber!

—That’s why this month’s stage in their tandem’s progression is key to its long-term possibilities. —We trust that, together and separately, Maine and Alden are up to the ever-evolving challenge of their hit tandem’s extended run!