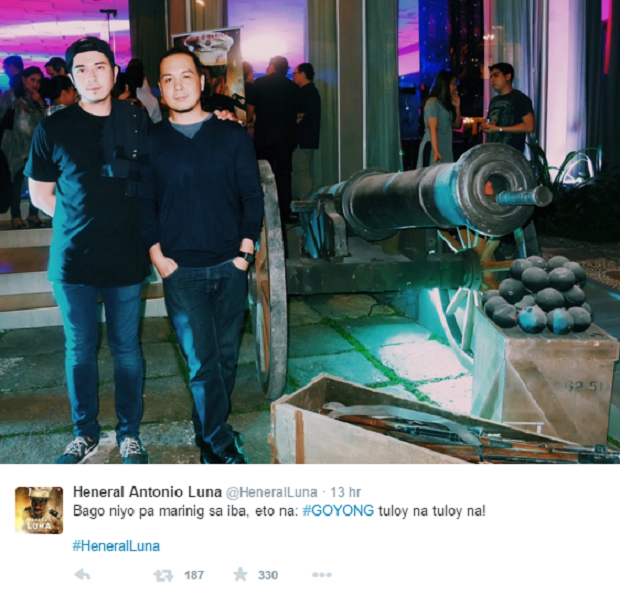 Following the success of the historical epic “Heneral Luna,” film producers have confirmed that a movie about General Gregorio del Pilar will push through.

Producers made the confirmation on Heneral Luna’s official social media pages on the wee hours of Friday, after a thanksgiving party for Heneral Luna on Thursday evening, which coincided with the birthday of the Filipino war-time general.

A photo of director Jerold Tarrog and actor Paulo Avelino, who will reprise his role as Del Pilar, was posted on Heneral Luna’s Facebook and Twitter accounts.

Del Pilar, also known by his nickname “Goyong,” was a young general during the Philippine-American War who led the battle at Tirad Pass.

Heneral Luna, which has been chosen as the country’s bet in the 2016 Academy Awards for the Best Foreign Language Film category, has grossed over P240 million by mid-October, breaking even after five weeks in local cinemas. Foreign screenings in the United States are already underway. CDG

Read Next
Glamour’s Women of the Year: Witherspoon, Jenner, Copeland
EDITORS' PICK
Harnessing technology for quality education
Hidilyn Diaz wins weightlifting gold in Tokyo Olympics
Golden girl Hidilyn Diaz ‘nervous’ but never in doubt during Olympics performance
FLASHBACK: The day Hidilyn was shocked over inclusion in oust-Duterte matrix
Connect to PH’s fastest network with new Signature Plan Lite at only P599 per month
Tips for a cheerful life
MOST READ
Hidilyn Diaz wins weightlifting gold in Tokyo Olympics
Go to war with China over West PH Sea? It will be a ‘massacre’, says Duterte
Hidilyn shoots not only for gold but also for permanent place in PH sports history
Hidilyn Diaz overcomes struggles to make history for PH with gold medal
Follow @YGonzalesINQ on Twitter
Don't miss out on the latest news and information.