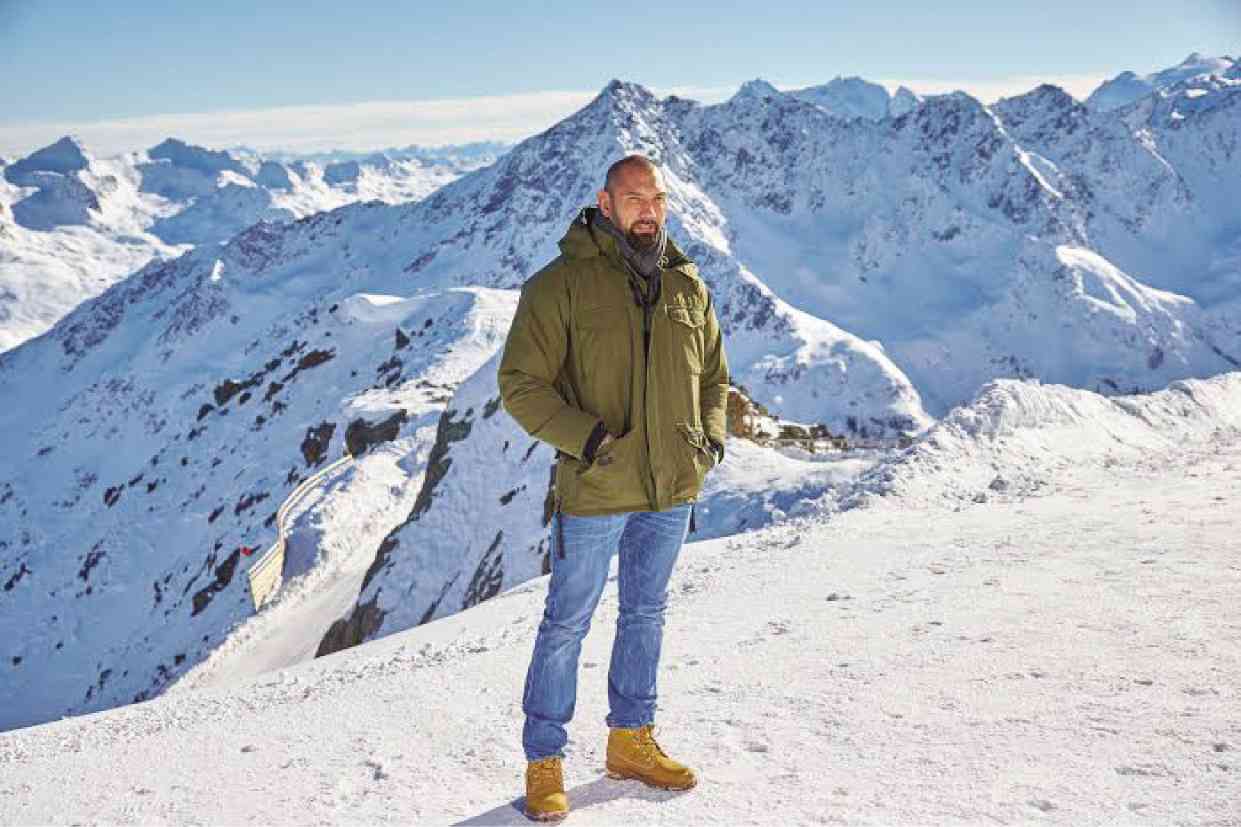 LOS ANGELES—“No, I wasn’t careful with him (Daniel Craig),” declared Dave Bautista, the first Filipino-American James Bond villain about brawling with the actor in Sam Mendes’ “Spectre” that is probably among the most memorable fight scenes in 007 cinematic history. “We beat the hell out of each other, to be honest with you.”

“But I was a professional,” stressed the actor whose father is Filipino. Dressed in a tight turtleneck sweater that made his biceps look bigger than my two arms combined, Dave looked massive—a 6-foot-6-inch tall giant in a meeting room at the Corinthia Hotel in London.

Playing Hinx, Dave tussles with Daniel in several scenes but a knock-down-drag-out fight on a speeding train is spectacular. It left Daniel with an injured knee.

“Sam doesn’t like to use doubles very much so a lot of that was us,” explained the six-time World Wrestling Entertainment champion. “It turned out great because you can see that it’s actually us.”

“We were well-prepared for this fight scene on the train,” added the former pro mixed martial artist. “We rehearsed and rehearsed and we still managed to both get hurt.”

The train scene, one of “Spectre’s” thrilling set pieces, is reminiscent of an iconic fight between Bond (Sean Connery) and Red Grant (Robert Shaw) in 1963’s “From Russia with Love.”

“I didn’t remember that scene, never made the connection,” said the actor whose mother is of Greek descent. “I downloaded the movie (laughs) on iTunes. I watched the scene and I can see where they would make the comparison.

Ahead of its time

“What we’ve accomplished is a modern-day thing. That fight scene must have been way ahead of its time because it was not only very gritty but it was very violent. It was well-done.

“We are proud of our fight scene because I think it will be one of those scenes that 30 years down the line, they’re going to be looking back and say that was way ahead of its time.”

On being the first Fil-Am actor in a major role in a Bond movie, Dave, who sports tattoos of the flags of the Philippines and Greece on his arm, admitted, “I say to people, ‘I’m very big in the Philippines.’ It’s very humbling because the Filipino people just embraced me like I was born and raised there and I’m full Filipino. That means a lot to me.”

The man who is Drax the Destroyer in “Guardians of the Galaxy” and in a coming sequel recalled his humble beginnings. According to online reports, “His paternal grandfather served in the Philippine military, worked as a taxicab driver, barber and held other jobs to feed the family.”

“I was a poor kid,” said the Washington, DC native. “There was a lot of times when we didn’t even have food. My memory of that is something I still struggle with.

“Obviously that’s a common factor in the Philippines so I want to inspire people to not settle with the choices that they’re given that are right in front of them; to not to settle with living on that same block their whole lives and being limited to what amount of food that they’ll have, what type of job that they’ll have and how they’ll have to go out to struggle to actually have a dream.

“And don’t just have the dream—actually go out and pursue it. As long as you’re not afraid to fail, you can go out and accomplish more than you ever thought you could.”

“It is a cool thing,” Dave commented about being the first Fil-Am Bond villain. “I always say there are henchmen and then there are James Bond henchmen. Completely different animals.  When I first got into film, I was always offered the role of strong guy No. 1 or right hand man No. 2. I was always offered henchman type roles. I turned them down because I just wanted nothing to do with them. I actually wanted to learn how to act.

“I was going to learn how to act playing a big muscle head who was just kicking open doors, shooting people in the face and not doing anything interesting,” he said with wry humor. “I’ve seen it a million times but with these (James Bond villain) characters, they’re just so memorable and iconic.

“It was very much an honor to even be considered. I did my audition and finally met with Sam. He was a little concerned whether I’d really at this point (in my career) be interested in this type of character and also with the very limited dialogue (laughs). I said, ‘Absolutely, I would be honored.’

The 46-year-old actor, who shares top billing with Robert de Niro and Jeffrey Dean Morgan in “Heist,” appeared even bigger than the last time we saw him in Mexico City where “Spectre’s” thrilling opening sequence 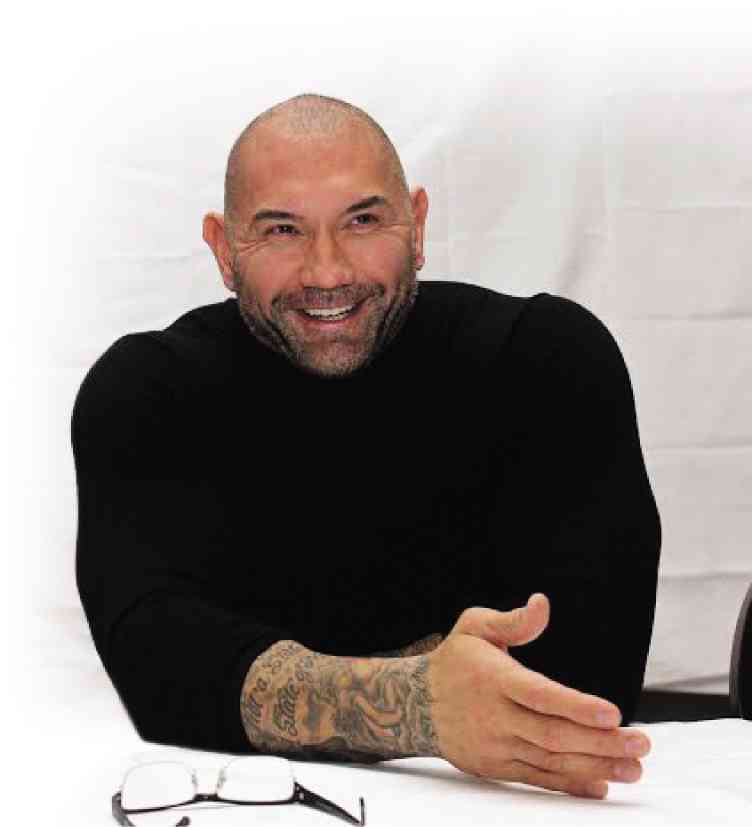 DAVE Bautista: “As long as you’re not afraid to fail, you can go out and accomplish more than you ever thought you could.” RUBEN V. NEPALES

“When I first talked to Sam about this role, he described the character as being so large and imposing. I said, ‘Yeah, I can put on some weight for you if you want.’ He said, ‘Yeah, that’d be great.’

“I started lifting weights again and the designers came over to Washington, DC to do a fitting for me. I was telling them that by the time we get to the filming, I’m probably going to be 10 to 15 pounds heavier. They said, ‘No, if you do that, you’re going to kill us.’ Because they were having so many suits made for the fight scenes and everything.

“They had like 13 suits made for the train fight scene and if all of a sudden, I show up and I don’t fit in any of them, they’re going to start at square one.”

He volunteered how he grew into a hulk. “I have this physique for a reason,” Dave dished with a laugh. “I was such a socially awkward, introverted, shy kid that eventually I just found my comfort in exercise.

He revealed, “I was raised by a single mom who was a lesbian and my dad was nowhere in the picture so I wasn’t raised around sports. I was raised on the streets. My mom was trying to work to put food on the table.

“I was running on the streets, getting in trouble. When I was a teenager, my mother finally sent me to live with my father. I was in high school. Then one of the kids on the wrestling team said, ‘What do you think about coming out for the wrestling team?’ Because I was already muscular. I wasn’t jacked like I am now but I was muscular.

“I just went out and started beating the hell out of guys. I was just sticking guys just through brute strength and will. Then I found my way into the weight room. I started lifting weights. In my first year of wrestling, I was 185 pounds. In my second year, I was 220 pounds. After high school, the next thing you knew, I was 250 pounds.

“I just built up and it became a natural thing for me. I was very big, strong and muscular. The gym was the only place where I felt I wasn’t socially awkward and I wasn’t a misfit. I felt like I fit in.”

Dave would have liked to spend his honeymoon with Sarah Jade in Hawaii and the Philippines. The couple tied the knot early this month. “My wife doesn’t like to travel,” he explained. “She gets really bad motion sickness. As soon as she got here (London) today, it broke my heart. She was crying and she said, ‘I got sick in the car on the way here with a bag of vomit (laughs).’ The honeymoon that we didn’t get to have—we’re going to do it now.

“I thought it would be great if we could go to Hawaii and then the Philippines. But when she found out how long the trip was to Hawaii, she didn’t even want to go there anymore. We live in Florida so my best bet to get her out of the country is on a cruise boat or something like that. For some reason, she thinks she can deal with that. I may end up with a wife throwing up for seven days on a boat. But she’s willing to attempt it anyway.”