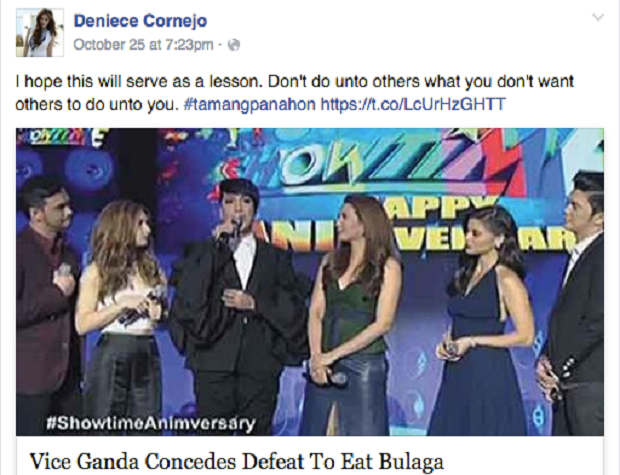 What goes around, comes around?

Model Deniece Cornejo took a jab against the stars of ABS-CBN noontime show “It’s Showtime” as it continues to lag behind its rival, GMA-7’s “Eat Bulaga” in the ratings game.

Cornejo said that It’s Showtime’s lost should serve as “a lesson.”

“I hope this will serve as a lesson. Don’t do unto others what you don’t want others to do unto you. ‪#‎tamangpanahon” she said on her Facebook account last Sunday.

Eat Bulaga continues to trump It’s Showtime in the ratings game due to the widely-popular “Kalyeserye” which features “AlDub,” the popular love team of actor Alden Richards and Maine Mendoza, better known as “Yaya Dub.”

In January 2014, Cornejo, businessman Cedric Lee and Zimmer Raz were implicated in the mauling of It’s Showtime host Vhong Navarro. They were jailed over illegal detention charges but were eventually allowed to post bail.

During the height of the controversy, Vice Ganda and other hosts of the show poked fun at Cornejo and her group, even staging a spoof of her interview. The comedian even did the “Deniece dance” which was based on the hand movements of the model in one of her interviews. AJH/RAM