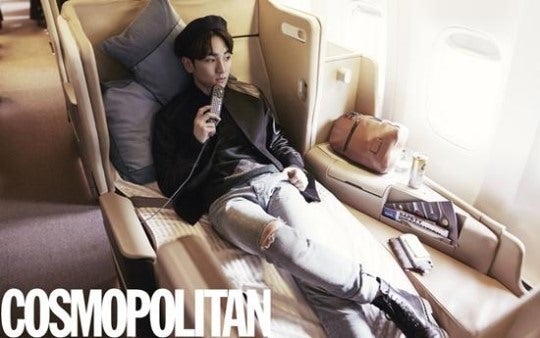 In the snap taken in San Francisco, the 24-year-old looks chic, gazing at the camera in a stripe turtleneck sweater matched with a black jacket. In another shot, he appears laid-back, donning a simple black jacket and ripped blue jeans, in the first-class cabin of a plane.

In an interview with a magazine after the photo shoot, he shared his fashion tips, saying, “I always try something new to look different from others.”

“Instead of being constrained by fashion, I care more about the attitude towards fashion. I like to develop my own fashion style,” he said.

The singer-actor is currently playing the lead in a musical “In the Heights.”

The full interview and photoshoot is available in the November issue of Cosmopolitan Korea.

Megahit K-pop stars to return in 2015