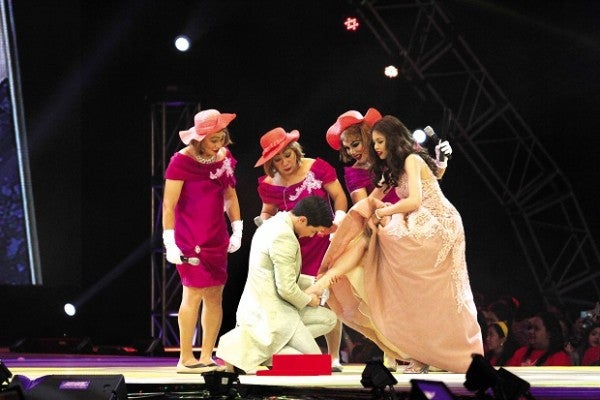 REINVENTING CINDERELLA In the fashion of the fairy tale, Alden Richards tries a shoe on Maine “Yaya Dub” Mendoza during “Tamang Panahon” event of “Eat Bulaga” at the Philippine Arena on Saturday. With the AlDub love team are (from left) Jose Manalo as Lola Tinidora, Wally Bayola as Lola Nidora and Paolo Ballesteros as Lola Tidora. RICHARD A. REYES

The “close encounter” was held at the 55,000-seater Philippine Arena, the biggest indoor arena in the world.

When the special episode of the noontime show was announced last week, some critics cast doubts on the newbie couple’s ability to fill up the huge arena.

As early as 6 a.m. on Saturday, however, fans, from as near as Marikina and as far as Quezon province, started flocking to the venue. By 9:30 a.m., the Arena was filled to the rafters.

The mood in the Arena was electric.

The crowd let out deafening cheers when Yaya Dub and Alden separately went up the stage.

Hard-core AlDub fans shed tears when the couple finally embraced and laughed heartily when the two cracked jokes and did their “pabebe” (cutesy) Dubsmash.

Tickets to the show were sold-out as early as Tuesday, Malou Choa-Fagar, senior vice president and chief operating officer of Tape Inc., producer of “Eat Bulaga,” told the Inquirer.

Tickets to the VIP seats were sold out immediately after the announcement was made on television, Fagar said.

Producers did not intend to make a killing via ticket sales, though. Proceeds would be allocated to a project which plans to build libraries in three schools in Luzon, the Visayas and Mindanao.

The show’s hosts announced that P14 million has been raised for the project.

Sen. Tito Sotto, one of the main hosts of “Eat Bulaga,” told the Inquirer: “The show has built many classrooms and furnished numerous classrooms with new chairs. But we’ve noticed that there are very few schools with libraries, especially in the marginalized areas. We thought it best to further contribute to young people’s education by building libraries and filling them with books.”

AlDub fans and the “Eat Bulaga” team were often chided in the past for spending too much time in Twitterverse—for obsessing about beating its tweet record every week.

At its peak, “Eat Bulaga” hashtags reached 25 million tweets, meriting a congratulation from Rishi Jaitly, Twitter vice president for Asia-Pacific and the Middle East, who vouched for the “AlDub phenomenon’s authenticity.

Also, critics frequently challenged AlDub Nation, as the couple’s fans are called, to put their social media clout to good use.

Fagar said AlDub fans were involved in noteworthy programs, like a bloodletting project, in the past.

“We wanted to harness the power of the Aldub Nation, to support the show’s outreach programs,” Fagar said. “We knew just how supportive and active the group is.”

Director Poochie Rivera said the goal was to show the world that AlDub can accomplish something meaningful.

The show, as aired on GMA 7, had no commercial interruptions.

“Instead of spots, company logos were flashed onscreen throughout the three-hour show,” Fagar said, noting that “a special rate” was given to advertisers.

Even the costume of Frankie Arenolli (played by Jose Manalo) was emblazoned with sponsors’ logos.

So what is the secret of AlDub power?

“It’s phenomenal and unprecedented. It is made possible by the availability of social media. It brings us media professors and scholars to a whole new arena of audience research to understand what made it happen and to be able to see if it might have any value for future sociopolitical movements,” said Betsy Enriquez, professor of Broadcasting at University of the Philippines College of Mass Communication.