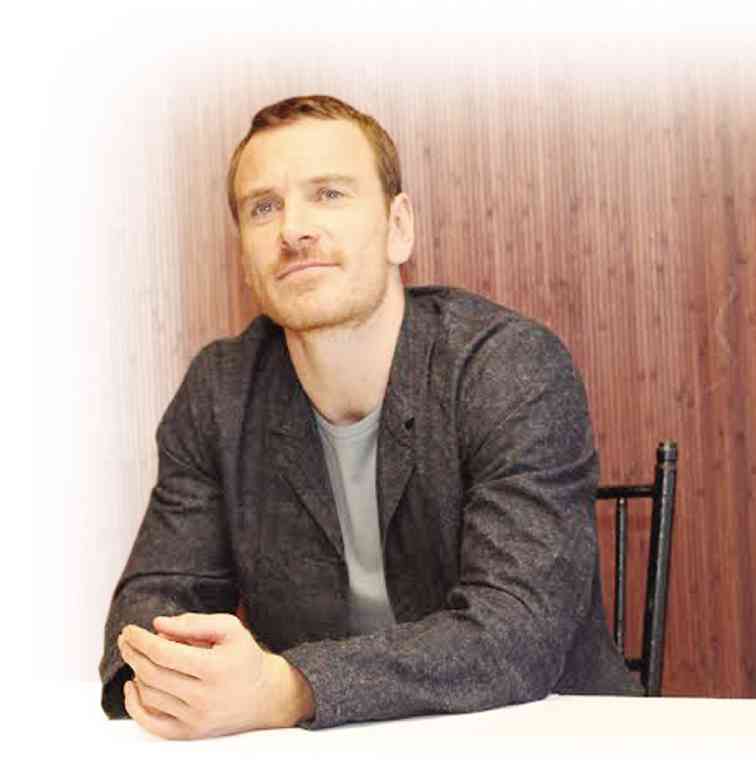 “He definitely changed the world,” the actor says of the late Apple cofounder. RUBEN V. NEPALES

In an especially good mood and joking disposition at the Mandarin Oriental New York, Michael was a contrast from the serious roles he’s been playing lately, from “Steve Jobs” to “Macbeth.”

Physically, the 38-year-old actor may not resemble Jobs onscreen but with his terrific acting skills, he is the late computer visionary in Danny Boyle’s excellent film. Some folks dismissed the film as “talky” but how often do you hear Aaron Sorkin’s crackling dialogue these days?

And these lines, brilliantly delivered by Michael and his uniformly outstanding costars—Kate Winslet, Jeff Daniels, Seth Rogen and Michael Stuhlbarg—help make “Steve Jobs” one of the best films of the year.

There are no car chases in this film—just a series of vignettes from Apple’s key moments.

Michael, whose credits include “12 Years a Slave,” “Shame” and the “X-Men” movies (he plays Magneto/Erik Lehnsherr), admitted that he’s a “slow learner,” so we can imagine the intense preparation he put in since he has lines in every page of Aaron’s screenplay.

We had the honor of meeting Steve once at the headquarters of the animation powerhouse he founded, Pixar, in Northern California. Clad in his trademark black top and blue jeans, Steve welcomed us at the studio’s screening room.

The following are excerpts from our chat with the Germany-born, Ireland-raised actor.

How else did you prepare to play Steve Jobs?

The script is so dense so I just spent a lot of time with it. Then I watched whatever clips I could get of the man himself on YouTube and watched them over and over again.

In your research on Steve Jobs, what did you like and dislike about him?

Not copping out of the question but I don’t really or necessarily need to like or not like (a person I am playing). I just try to understand [that person]. What’s really impressive is Steve Jobs’ vision, passion and commitment to that vision. And the vision started in the late 1970s.

When the Macintosh came out, everyone was like, “Oh well, this is a toy and I can’t use it in the office.” So his vision was basically to take away the idea that these machines were just perfunctory and that we actually form relationships with them.

I am sure as people know their relationships with their iPhones or their tablets or whatever it may be; it goes beyond a tool that you use. There is a relationship there. And that vision was born, as I say, in the late 1970s. Steve Jobs’ drive and his commitment to it against all odds and people who didn’t see it and worked against it—that’s really impressive.

Steve Jobs had been called many things, from genius to jerk, to someone who changed the world. What do you call him?

Steve Jobs (laughs). He was an extraordinary person. He definitely changed the world we live in, for sure. He was like Henry Ford multiplied by 1,000.

I just find him to be a very impressive person and somebody who changed the way we go about our lives. I don’t think, oh, was he a bad man or a good man? That stuff bores me, to be honest. It’s just moral high ground.

Had you met Steve Jobs, what questions would you—as a person, not as an actor—have asked him?

“Do you want to drop some acid? Where should we do it?” (Laughs)

What would I ask him? “What did you do in your moments of doubt?” I don’t really know. “Who was the most impressive person that you met and worked with? And what is your biggest fear?” I am just thinking of the questions that you would ask me.

This film has a very distinct rhythm. How did you adjust to it?

Rhythm is a really important thing in all scripts. But in this one in particular, the rhythm is dictated by the way that Aaron Sorkin writes. So it’s got a certain cadence to it that you need to obey because if you don’t, it just spits you off.

For example, I could be doing a scene with you and talking. If I stop and I am like, “What is my next line?” and I take a pause, that pause is not in the rhythm. Then the whole thing falls apart.

The next person who is coming in with his dialogue is dependent on my rhythm. So it sways like that. It actually helps, like Shakespeare—the rhythm helps you understand the emotional journey, the objective or what is going on inside the character’s mind at the time.

It’s very obvious in the way that Aaron writes and maybe more obvious than other scriptwriters. For example, Quentin Tarantino obeys a very particular rhythm as well and you need to find that rhythm.

You have lines in every page of this film’s script. In the context of all of the movies you made, how difficult was this?

I am a slow learner. So it was a lot of hours just learning lines. If we weren’t rehearsing, I was at home learning lines. When we finished filming act one, I would go home and learn act two. So it was continuous until we got to act three and I had my evenings free. I didn’t know what to do with myself.

Another three to four weeks would have been nice. But it was just the learning of the lines, really. That was the bulk of it. The script changed each time. It was 190 pages or so.

Kate Winslet said in our interview that you are so disciplined that you only had one drink during filming. Are you that disciplined when you work—you rarely drink and, perhaps, no sex? 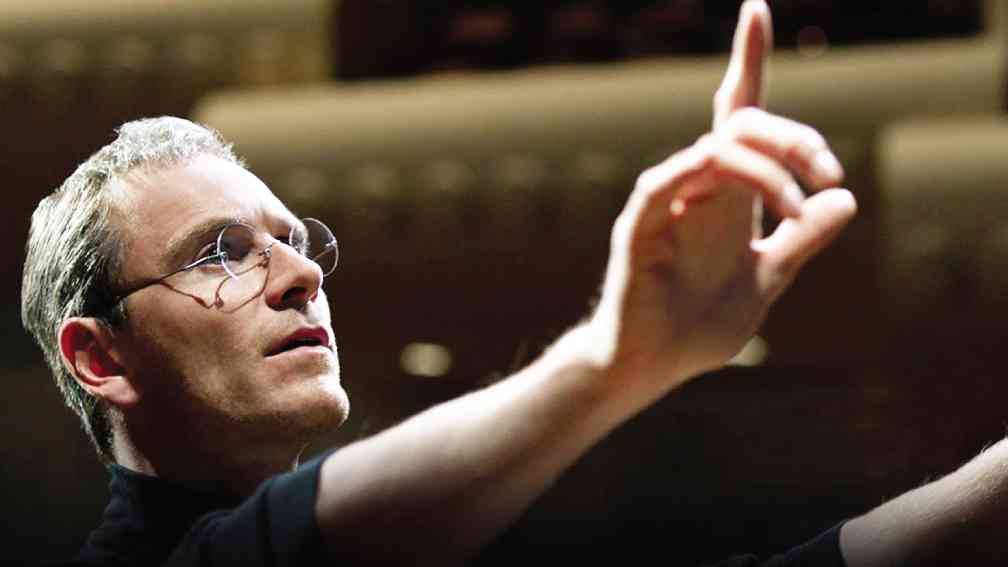 Fassbender in the biopic “Steve Jobs”

Let’s not go too crazy.  I drink and I have sex (laughs).

But I was working and just working. Basically, it was 17- to 18-hour days of what you need to do. I needed to just get those lines and find those rhythms so, yeah, it was pretty solitary in those months.

Steve Jobs seemed to always say what he thought. Do you always tell the truth? And do you appreciate bluntness?

I always want to hear the truth. I try and find the truth and I stay as much of a disciple to the truth as possible.

Two other actors were considered before you to play Steve Jobs. Does that affect you?

I tell myself that they were never in the picture (laughs).

I am used to the fact that a director, a producer or a team of people would want someone before me. I don’t think that is an unusual thing at all. When it gets tricky is when it gets leaked out to the media like e-mails did and I have to talk about it. For me, it’s part of the business.

It seemed that Steve Jobs didn’t care if a person liked him or not. Does it matter that people like you?

Obviously, it’s nice to be liked by people but it’s definitely not a priority. I would hate for my experiences of life and judgments to be curbed by that.

And for my philosophy in that regard—it’s not to care what other people think (laughs).

And treat others as you would like to be treated is one and to live every day as it were the last.

Steve Wozniak (Seth Rogen) tells Steve in the film, “You can be decent and gifted at the same time.” What’s your stand on that?

The thing with Steve Jobs was that there was a large element of impatience. When you are trying to drive a vision through and when you are working a lot, and for long hours, your patience levels tend to wane away—that’s from my personal experience.

In talking to some engineers who were working at Apple, I learned they didn’t have a problem with him. They didn’t find that side of him. It’s very hard when other people are giving an impression of a person I didn’t meet.

And I think somebody can be decent and change the world. Gandhi, I suppose, is a good example.

When did you realize that you wanted to be an actor?

When there were no other choices around (laughs).

It was OK, [I thought], this seems like fun. I was 17 and I didn’t know what I wanted to do at all. It was down to a guy called Donie Courtney. I really thank him because I just don’t know what I would have done.

He came down to this school that I was at, St. Brendan’s. He set up these drama/comedy classes on Wednesdays. My friend Emerson (Johnson) and I decided we would go and check it out. It was around the time that I was toying with the idea of being a musician and I realized that I wasn’t good enough.

What instrument did you play?

Guitar. Pretty badly. Then this (drama class) came about and I was like, oh, I feel like this is a form I could express myself in if I work hard. I could make a career of it, at least, and that was it. Once I decided I wanted to do it and it was in me, then I was very focused and determined. And I sang when I played guitar—I was an excellent singer (laughs).