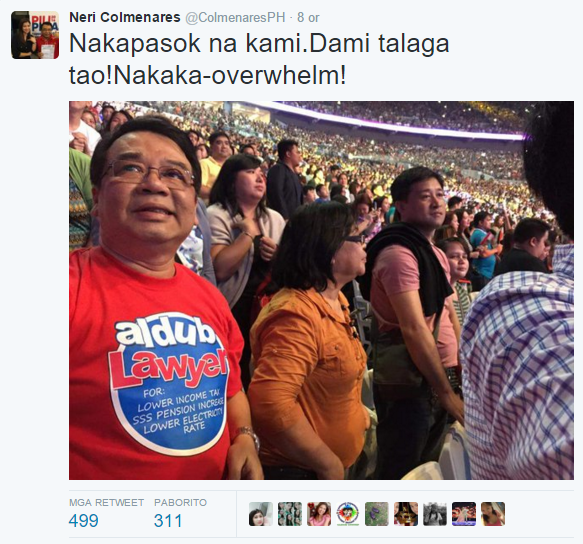 Colmenares, who had been touted by Twitter users as the “official lawyer” of the love team of actor Alden Richards and Maine “Yaya Dub” Mendoza, took to social media to update his followers on the “Sa Tamang Panahon” event.

Colmenares said he was overhwelmed by the number of people who flocked to the venue.

“Ang galing ng AlDub Nation! Solid talaga! Ang daming tao!” the lawmaker said as he shared of a photo of the crowd in the 55,000-seater arena, which helds the world record for the biggest multipurpose indoor arena.

The senatorial hopeful said he was particularly amused with the production number of Lola Nidora, Tidora, and Tinidora, the characters being played by comedians Wally Bayola, Jose Manalo, and Paolo Ballesteros.

“If you fight for what you believe in, in time darating ang tamang panahon,” Colmenares added.

Twitter user @cjlagarista also shared a photo of Colmenares with Eat Bulaga host and Sen. Vicente Sotto III. Colmenares is seeking a Senate post under the ticket of presidential aspirant Sen. Grace Poe, whom Sotto has expressed support for.

Election lawyer Romulo Macalintal, who said that Eat Bulaga’s hit “Kalyeserye” segment was an opportunity to display Filipino unity, was also spotted at the arena.

Tickets for the event, which saw Richards and Mendoza hold hands, hug, sing, and dance together for the first time without Nidora’s prohibitions, were sold out in just two days after the event was announced on Saturday last week.