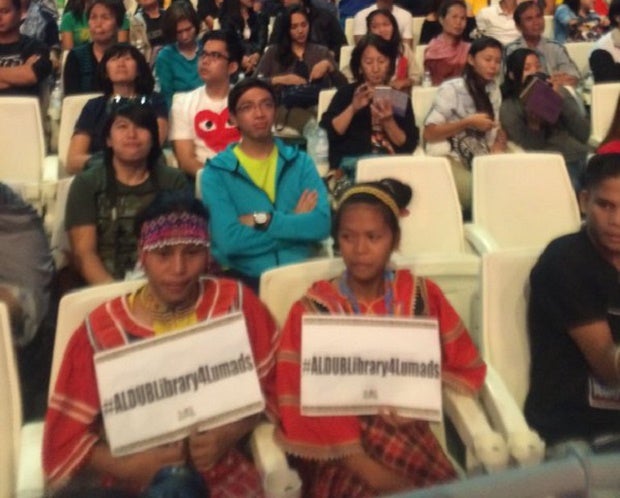 The indigenous peoples of Mindanao or “lumads” are among the beneficiaries of Eat Bulaga’s “Sa Tamang Panahon” event of the “AlDub” loveteam at the Philippine Arena on Saturday. Proceeds of the event featuring the tandem of actor Alden Richards and Maine Mendoza or “Yaya Dub” will go to the construction of “AlDub libraries” in schools nationwide.

Lumad children holding signages with the text “#ALDUBLibrary4Lumads” were spotted among the audience of the much-anticipated show at the 55,000-seater arena in Bulacan, which holds the record as the biggest indoor multipurpose arena in the world.

Tickets for the show, which ranged from P150 to P1,200, were sold out only two days after the event was announced last Saturday.

Thousands of fans flocked to the arena on Saturday morning to watch the noontime show, and were allowed to enter the as early as 6 a.m.

As the show started, Eat Bulaga hosts announced that the program will have no commercial breaks.

The hashtag for the show “#AlDubEBTamangPanahon” has reached 16.4 million tweets as of 12:48 p.m. YG/CDG

MMDA: NLEx to feel like ‘road to forever’ on Saturday