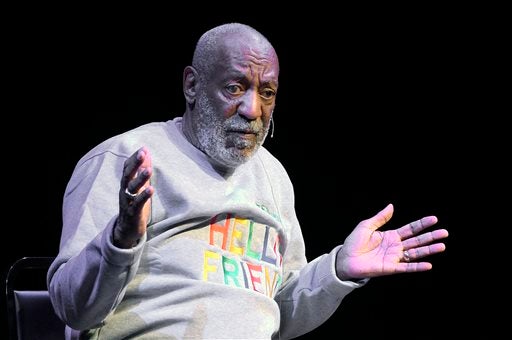 In this Nov. 21, 2014, file photo, comedian Bill Cosby performs at the Maxwell C. King Center for the Performing Arts, in Melbourne, Fla. Cosby is replacing his longtime lawyer in a sex abuse lawsuit filed by a woman claiming she was molested by the comedian in the 1970s when she was 15-years-old. Cosby’s new attorney Christopher Tayback filed a form on Friday, Oct. 16, 2015, reflecting that he was replacing Cosby’s longtime attorney, Martin Singer, on the case. AP FILE PHOTO

LOS ANGELES— Bill Cosby has replaced his longtime lawyer in a pair of lawsuits filed by women claiming they were sexually abused by the comedian decades ago.

READ: Cosby said he got drugs to give women for sex | Cosby detailed his womanizing, secrecy efforts a decade ago

Cosby’s new attorney, Christopher Tayback, filed a form on Friday reflecting that he was replacing Cosby’s longtime attorney, Martin Singer, in the case. Singer had been defending Cosby in a lawsuit filed by Judy Huth, a Riverside County woman who claims Cosby forced her to perform a sex act on him at the Playboy Mansion around 1974 when she was 15 years old.

No reason for the change is stated in the court filing.

Singer says his firm has also been replaced in a defamation lawsuit filed by model Janice Dickinson against Cosby, who she says drugged and raped her in Lake Tahoe, California, in 1982.

“Our firm has substituted out of the cases and I’m not going to comment on that, however we’re happy to assist in the transition of the cases to the new attorneys,” Singer said Tuesday.

The development was first reported Tuesday by the Los Angeles Times.

Cosby has suffered several legal setbacks in Huth’s case and a defamation lawsuit filed in Massachusetts by three women who claim they were sexually abused by the comedian. A judge refused to dismiss the Massachusetts case on Oct. 9, the same day the comedian was deposed in Huth’s lawsuit.

Singer has represented Cosby for more than a decade, and he was sued for defamation in 2006 by Andrea Constand, a Temple University worker who accused Cosby of abusing her and reached a settlement before trial. Constand’s lawsuit focused on statements made by Singer denying Cosby drugged and abused her. The lawsuit revealed Singer had been involved in a deal with the National Enquirer that granted the magazine an exclusive interview with the comedian in exchange for killing a story about another woman accusing Cosby of abuse.

The attorney has vehemently denied Huth and Dickinson’s claims. He says Huth’s former attorney attempted to extort Cosby for $250,000 before filing her lawsuit.

Huth’s current attorney, Gloria Allred, noted in a statement that Tayback’s firm is significantly larger than Singer’s practice, writing that “Mr. Cosby has decided to hire 700 lawyers to fight one woman.”

“We look forward to continuing our legal battle on behalf of Ms. Huth and this change will not impact our vigorous advocacy on her behalf,” Allred wrote.

Tayback, the son of television actor Vic Tayback, declined comment on his new involvement in the case. He is a former federal and state prosecutor who as a private trial lawyer has focused on a variety of business cases, including patent-infringement and class-action claims, according to the biography on the website of his firm, Quinn Emanuel.

A hearing in Dickinson’s case is scheduled for Oct. 29.

Dickinson’s attorney, Lisa Bloom, said Singer should not have been representing Cosby in her lawsuit.

“As Mr. Singer, on behalf of Mr. Cosby, sent out the defamatory press releases about Ms. Dickinson, it was not appropriate for him to represent Mr. Cosby in the case,” Bloom wrote in an email. “I’m surprised the change of attorneys took this long.”

Cosby has also been sued in a Los Angeles federal court by Chloe Goins, who accuses him of drugging and sexually assaulting her at the Playboy Mansion in 2008. Cosby’s lawyers have not yet responded to that case, which was filed earlier this month.