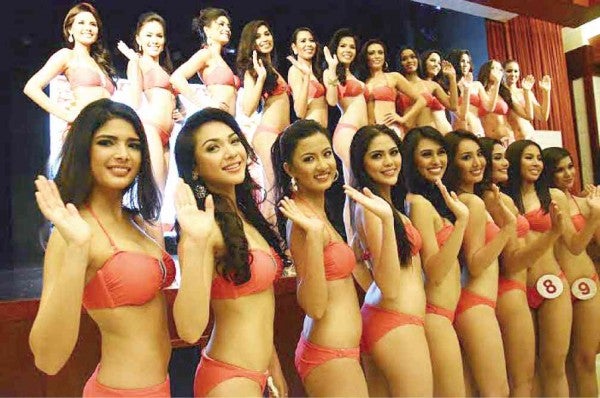 This year’s batch of Miss World Philippines hopefuls is the most prepared, according to Cory Quirino, who is in charge of selecting the country’s representative to the Miss World pageant.

“There has never been a better-trained [batch],” Quirino told the Inquirer during the recent presentation of official candidates at the Eclipse Bar of Solaire Resort and Casino in Parañaque City.

No less than Megan Young, who became the first Filipino woman to be crowned Miss World when she won the pageant’s 2013 edition in Indonesia, was the contestants’ mentor, shared Quirino, who also said that the 2011 Miss World first runner-up Gwendoline Ruais offered runway and projection tips, while 2014 Miss World semifinalist Valerie Weigmann conducted a seminar-workshop.

Quirino also revealed that the London-based organizers of Miss World dropped by the country earlier in September to observe the local bets. “This is the first time they asked to see our candidates first,” she related.

The pageant director expressed optimism that this year’s batch of aspirants will produce another international winner. “What makes this group of girls special is that the judges will see different types of beauty. For the first time, we have representatives from north to south,” Quirino declared.

She added: “It will be difficult for the judges to decide. But hopefully, they’ll choose the best one to represent the country in Sanya, China, on Dec. 14.”

Meanwhile, Weigmann is excited to crown her successor.

“I’ve already seen the candidates during the final screening, and they are all amazing onstage,” she related.

Weigmann, who was first exposed to the local and international pageant scene last year, said her participation made her a better person.

“I have been blessed with numerous opportunities. It made me become more open, to work with different organizations such as ‘Beauty With a Purpose.’ And my advocacy group ‘Musikaramay’ also changed it,” shared the German-Filipino model.

She added: “It was also wonderful to meet all the girls in London [for the 2014 Miss World pageant]. There were 130 girls and I really made an effort to know them and befriend them… I’m happy to say that I now have friends from all over the world.”

The Miss World pageant, Weigmann said, is looking for someone “with her own personality.”

She continued: “There is always that pressure to be like someone who has already won.”

The 2015 Miss World Philippines coronation night will be held at The Theatre of Solaire, at 7 p.m. It will air on GMA 7.

Read Next
Review board’s 30th anniversary honors Filipino family
EDITORS' PICK
vivo brings to the Philippines a powerful smartphone with a slimmer body, the vivo Y02s for only PHP 6,499
Apple warns of flaw that lets hackers into iPhones, Macs
46% of schools nationwide to have full face-to-face classes on Aug. 22
House energy committee chair Arroyo bats for cheap electricity
What to watch out for when selecting a video surveillance solution
Heads may roll at BOC, says Palace if sugar smugglers are allowed to use recycled import permits
MOST READ
DepEd to give teachers P5K cash allowance within first week of classes
LOOK: Miel Pangilinan dazzles in glittery pre-debut shoot
Man abducted in Batangas gasoline station, found dead in Quezon
Dressing the dead: Indonesian villagers clean corpses in afterlife ritual
Don't miss out on the latest news and information.