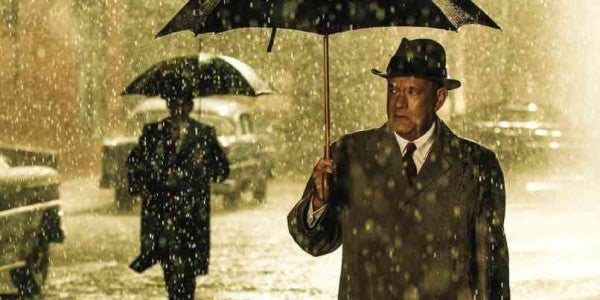 Steven Spielberg’s true-to-life period drama, “Bridge of Spies,” entertains as well as it examines the circumstances surrounding the unlikely bond forged between American lawyer James Donovan (Tom Hanks) and the Russian spy, Rudolf Abel (Mark Rylance), he was “forced” to defend in 1957 on charges of conspiracy.

It is this “ambiguous” relationship that, five years later, thrusts Jim into the center of the Cold War when he is tasked to negotiate the exchange of Abel for captured US pilot, Francis Gary Powers (Austin Stowell), whose U-2 spy plane was shot down over Soviet territory during a reconnaissance mission in 1960.

The potentially calamitous spy swap on the Glienicke Bridge, closed to East German residents after the construction of the Berlin Wall in 1961, is made more complicated by the arrest of Yale exchange student, Frederic Prior (Will Rogers), in East Berlin.

It’s a chilling tale that is given added gravitas by screenwriters, Ethan and Joel Coen, who deliver a script that bristles with a great sense of irony—and urgency!

The borders and barricades on Glienicke Bridge were dismantled as part of German reunification in 1990—but, they remain symbolic of the impediments to the global peace that Donovan continued to advocate until his death in 1970.

Amazingly, Donovan’s heroics wasn’t one-off: He was also credited with the release of 9,703 prisoners captured during the failed, CIA-sponsored Bay of Pigs Invasion, intended to overthrow the communist regime of Fidel Castro in Cuba in 1961!

Jennylyn Mercado is at her loveliest and feistiest in Jun Lana’s “The Prenup”—but, the actress’ first rom-com starrer with Sam Milby isn’t the worthy followup we hoped it’d be for the breakout star of “English Only, Please.”

In fact, Jen is the only bright light that keeps Lana’s vacuous rom-com viewable—the movie is loud, livid and ludicrously staged, and features vein-popping and eardrum-shattering portrayals (from Melai Cantiveros, Neil Coleta, Gardo Verzosa and Jaclyn Jose, whose cartoony characterizations of late make her look perpetually inebriated) that discombobulate more than they dazzle!

Wedding planner Wendy Cayabyab (Mercado) and acclaimed photographer Sean Billones (Milby, who acquits himself well in a role that doesn’t require him to “stretch”) are madly in love with each other—theirs is a story made more romantic by its dreamy New York backdrop. But, the loons around them intend to derail Wendy and Sean’s Happily Ever After by asking them to sign—a 200-page prenuptial agreement!

Lana’s directorial strengths have been showcased in indies (the sublime “Bwakaw,” “Mga Kuwentong Barbero”)—but, his forays into mainstream filmmaking (“My Neighbor’s Wife,” “Yesterday, Today and Tomorrow,” “Tarot”) have so far been underwhelming, to say the least.

“The PreNup” benefits from a frisky and sprightly start—but, it doesn’t take long for the viewers’ unforced laughter to die down, and for the movie’s story to spin out of control.

For Lana, it’s another missed opportunity in mainstream cinema—and a frustrating mess.