Not death-defying, but life-affirming (Conclusion) 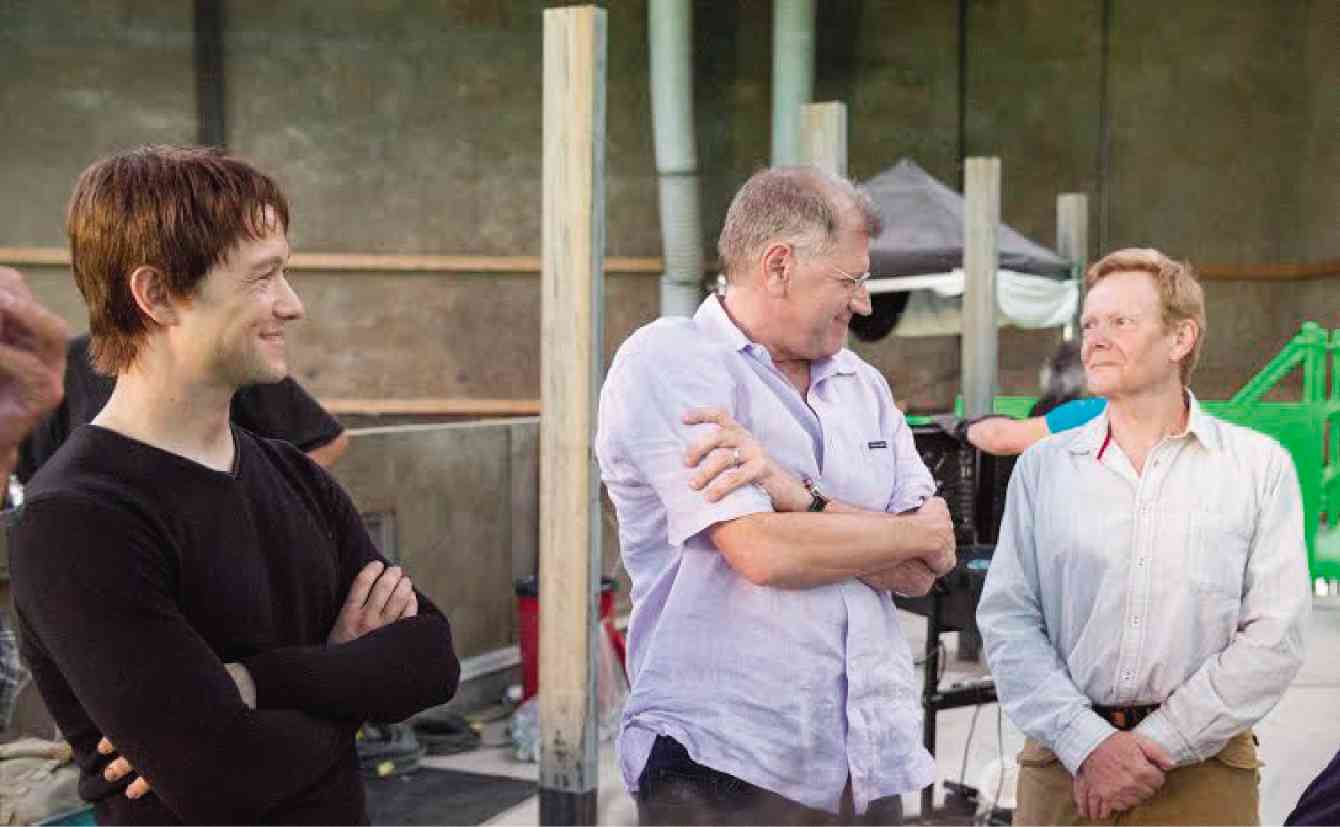 ON THE set (from left): Joseph Gordon-Levitt, Robert Zemeckis and Philippe Petit

LOS ANGELES—He tempted death for 45 minutes while walking between the twin towers of the World Trade Center. But Philippe Petit, who in 1974 did the spectacular, though illegal, stunt that was dubbed as the “artistic crime of the century, claimed that he was not aware of time and that he was defying life, not death. Here’s the second part of our column on Philippe, who is portrayed by Joseph Gordon-Levitt in Robert Zemeckis’ enthralling “The Walk.”

Philippe claimed that when he was up there, a man with a pole more than a hundred stories high, time was immaterial. He shared, “I didn’t have a watch to look at but my friends told me, ‘Philippe, you did eight crossings. You stayed 45 minutes on the wire.’

“But that means nothing to me because 45 minutes can be an eternity if you hide under a top with 100 stories beneath you (as he and a friend did to hide from a guard before the walk) or it could be very short if you do a magic trick. In 45 minutes, you can do 300 magic tricks. So time doesn’t exist. That’s why I cannot grow old.”

He also stressed that he did not plan to cross the towers several times. “Nothing was planned in my performance,” he said. “What was planned was to do one crossing, for sure but since I am not a daredevil who was trying for fame and money and get on the other side and say I did it, I broke the record. Actually, I never thought that I broke the height record.

“As the film rightly shows, I sat on the wire and I contemplated the void and the towers. The poet in me was called by the towers. The first crossing was just to feel the rigging. I wanted to perform so I stood up and I performed. I did turn around but not so much because the cops were on both sides.

“Of course, I didn’t want to give myself up on the second crossing. No, no, no. Then the man of theater in me came out because I’m not really a wire walker. People say I’m a poet who writes in the sky.

“Anyway, I felt another one and another. That’s why I happened to do all those crossings. It was improvisation at its best. I lay down. Nothing was planned.”

Philippe sounded especially proud for convincing Robert to allow him to train Joseph so the actor himself can do some of the high wire scenes (wire walking double Jade Martin did some).

“I trained Joseph for eight days in a warehouse,” he began. “I taught him to walk on a tightrope but he realized during those eight days that he was doing much more than learning how to walk. He was learning how to become me. He observed my machine-gun (speaking) delivery, my big French gestures, pouting and frowning. He picked up all those things.”

For the actual training, Philippe began by simply asking Joseph to walk on a line drawn on the floor. The teacher explained, “In my opinion, it’s more difficult to walk nicely on a line on the floor because you feel nothing compared to balancing your body on a little cable. I remember the very first time, Joseph did it mechanically. I said, ‘Walk.’ He walked and it was just ugly and boring.

“So I continued this technical and poetic training on a wire. On the last day, I put him on a 10 feet high rope or cable, 30 feet long, like the one I used at the World Trade Center. Some of it (the training) were shot for the extras on the DVD.

“On the last day, I said to Joseph, ‘It’s amazing, the progress in fibers in the world. Have you heard about the Kevlar family coming from Russia? They do little threads that are basically invisible so for your last crossing, I have the Russian safety belt. It’s invisible and I have the one with the square. Which one do you want?’

“Joseph said, ‘I could try the invisible.’ So I went in front of the camera and I attached the imaginary belt. Joseph was playing with me. On his last crossing, there was no belt but this is a secret.”

With an impish grin, Philippe said in a conspiratorial tone, “I’m not supposed to say that. I signed the agreement (to always put a safety belt on Joseph during training) so don’t tell anybody.”

He is obviously pleased with the film and Joseph’s performance. “I saw myself many times on the screen. Hats off to Joseph for his great portrayal of me.”

Asked for an update on the recruits who helped him pull off the stunt, Philippe answered, “Everybody went on with their lives. They are getting older like me. Some stayed my best friends. Some, out of envy and a certain sad sentiment, turned their backs on me. When we got to the Oscars (with ‘Man on Wire’), some turned their back on all this majesty, glory and celebration. In my heart, they are all still my best friends.”

The film is Robert’s love letter to the twin towers and New York City itself. Philippe shared the same sentiment when he talked about his daring feat on the towers that would tragically collapse many years later.

“A lot of people know and carry in their hearts indelible sadness and terror so this is something else,” he reflected. “I am here to actually help people balance between grief and joy. When a dear person disappears, you should not stop living. Life is made of opposites. I know that very well because I balance on the wire so there are tears and grief on one side but there is joy and remembrance of life on the other. This film is all about that.”

On how the walk impacted him personally, he replied, “My life changed because suddenly, I was known all over the world. I would never enjoy fame but I see it as a tool. Fame opens doors to, like, money. I have money or I have no money. I can live on both sides of that spectrum but money is a tool and fame is a tool. You say, I have a meeting with the president of something. Before that, ‘Who are you, Philippe Petit? I never heard of you.’

“So my life changed in an almost professional sense but spiritually speaking, did I change? No, I am still this advocate of the impossible. I am still an impetuous, rebellious, tenacious craftsman who loves to build projects and ideas. I will continue with my life.”

So what are the next projects he’s plotting to do? “I was asked that question right after my walk. People thought, wrongly so—he’s one of those guys who’s going to become rich and famous and there is nothing else for him after he walked on the highest towers in the world.

“But for the craftsman, the poet that I am, the man of theater on the wire, there was a whole world offered to me. I discovered a beautiful cathedral in New York called St. John the Divine. The cathedral was unfinished. Two towers were missing so I helped them (raise funds). I did a walk 16 stories high on the unfinished façade of the cathedral.

“The bishop and the dean vested me with the artist-in-residence title. So these days, I am a modern Quasimodo who doesn’t have any hump but I live and work there (in the cathedral). I did many walks for them and I continue to walk around the world and to have projects. One is in Easter Island with the beautiful statues—the Moai. I would like to do a show with the Rapa Nui people.

“The phone rings and sometimes I have to say no because I am not artistically interested. But I continue to be a professional wire walker and street juggler—I do not do it regularly. I grab my hat and bag and I zigzag, mostly in the parks in New York. I will continue all that until my body refuses to listen to me, which probably won’t ever happen.”

Not death-defying, but life-affirming