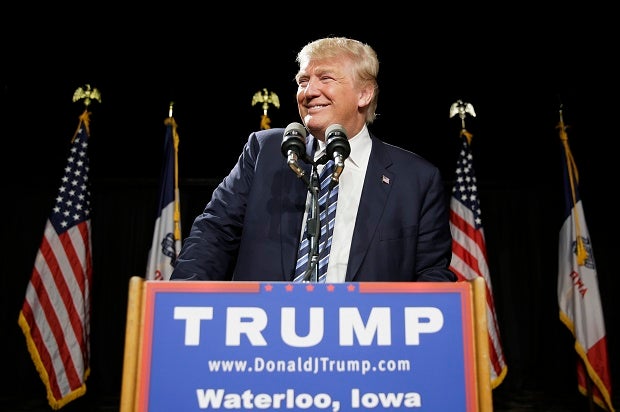 In this Oct. 7, 2015 file photo, Republican presidential candidate Donald Trump speaks during a campaign stop in Waterloo, Iowa. Trump has agreed to host “Saturday Night Live” next month. NBC said its former “Celebrity Apprentice” host will be the headliner of the Nov. 7 show. AP FILE PHOTO

Trump told Fox News Channel on Tuesday that he and NBC settled their beauty pageant “dust-up” and have moved on.

In June, NBC said it would end its business relationship with Trump because of comments he made during the announcement of his presidential campaign about Mexican immigrants. The network dropped the annual Miss USA and Miss Universe pageants, which had been a joint venture between it and Trump.

Trump recounted Tuesday that he had purchased NBC’s half of the Miss Universe Organization, which included the two pageants, and sold the company to WME-IMG.

“It worked out well for everybody, so I think NBC’s happy and I’m certainly happy, and we’re doing ‘Saturday Night Live’ and that’ll be exciting,” Trump told Fox.

Asked how he thinks his appearance on “SNL” will go, Trump was upbeat.

“I think it’s going to go fine. … I’ve done it before. It’s always a great honor,” he said. He added that CBS’ “60 Minutes” earned strong ratings for a September episode that included interviews with him and Russian President Vladimir Putin.

NBC said Tuesday that its former “Celebrity Apprentice” host will be the headliner of the Nov. 7 show. It’s the second time he has hosted the comedy institution; he was on the show in April 2004. Trump was also skewered in the season premiere’s opening sketch.

Trump has been ratings gold for nearly every television outlet he’s touched since his presidential candidacy took off this summer, the main reason behind record viewership for the two GOP candidates’ debates in August and September.

Sia will be the “Saturday Night Live” musical guest on the night that Trump hosts.

The Trump swagger is seen, not always loved, worldwide