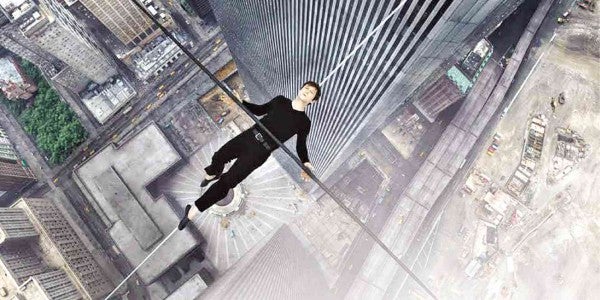 THE ACTOR portrays Philippe Petit, whose daring feat was made convincing by photorealistic techniques and Imax 3D wizardry.

LOS ANGELES—Let’s get it out of the way—do watch Robert Zemeckis’ “The Walk.” It’s a thrilling caper, not unlike a bank heist movie where the thrill is as much in the planning, preparation and the steps leading to Philippe Petit’s spectacular feat of walking on high wire between the World Trade Center towers in 1974.

And when the French Philippe, 24 at the time, engagingly played by Joseph Gordon-Levitt (accent and all), does finally get to walk on the clouds, more than a hundred stories above Manhattan’s streets, the treat doesn’t end there. Robert and Joseph gift us with twists and surprises, in addition to the visual spectacle of recreating the unprecedented walk of a man in the void between the twin towers.

To boot, “The Walk” is a moving ode to the now-gone towers and New York City itself. The pleasures offered by “The Walk” should not detract from your appreciation of the 2009 Oscar-winning documentary on Philippe’s derring-do, James Marsh and Simon Chinn’s excellent “Man on Wire.” They are obviously two different animals.

When we watched the 3D triumph as the opening night film of the New York Film Festival at the Lincoln Center, it was such a visceral, enjoyable experience felt in unison with the audience, a shared elation rarely experienced these days amid the glut of bland, generic movies.

As the lights went back on, the crowd applauded Robert (whom Joseph and the industry call “Bob”), Joseph, Charlotte Le Bon and company—the actors playing Philippe’s band of international recruits who help him execute his brazen idea. They acknowledged the cheers from their balcony perch.

The filmgoers smiled or giggled as they told each other that they experienced being weak in the knees or having butterflies in their stomachs as they themselves experienced, thanks to the latest photorealistic techniques and Imax 3D wizardry, being up there in the clouds with Philippe. Not just looking up from the street, as the 1974 spectators of Philippe’s record-breaking walk did.

“That felt so great to get that applause,” Joseph said the morning after that Lincoln Center screening. He looked dapper in a suit in this chat at the Crosby Street Hotel in SoHo. “It was really fulfilling to see the movie last night, especially in New York City. And hear the audience getting emotional because it really resonates to tell a story about those two buildings and this incredible thing that happened there. And to hear people being so emotionally involved in it made me very happy.”

Philippe was also at the opening night screening but, like Joseph, he had seen the film earlier. “The first time Philippe saw it, he called me on the phone,” the actor recalled. “I was at work.” He said (in the French accent he uses in the film), “‘I just saw the film and I wanted to call you first. I wanted to tell you before I tell anybody else that I love it. I just loved the film and I thought you did a great honor to me and to the walk. Thank you.’

The actor, whose other credits include “(500) Days of Summer,” “50/50,” “Brick,” “Hesher” and “Inception,” shared Philippe’s reaction, this time at last night’s screening: “Seeing him get emotional, get wrapped up and excited, especially the moment when he was on the wire for the first time and the camera looks down…he got really excited and he turned to his partner Kathy (O’Donnell) and pointed at the screen. You could only imagine because that is something that only he has seen. And there he was, seeing it rendered on screen. I just loved that he had that reaction.”

Joseph also loved seeing and hearing his acrophobic dad’s reaction in an earlier screening. “My father (Dennis) is very scared of heights. He doesn’t even want to stand next to a window in a tall building. On the first time I saw the final version of this movie, I brought my parents with me. It was a lot of fun hearing my dad yelp with adrenaline (laughs) because you don’t often get to hear your dad make noises like that.”

For folks not thoroughly familiar with Philippe’s extraordinary feat, the surprise in the film is that he did not just walk the high wire one time. “He was actually on the wire for 45 minutes in real life,” Joseph shared. “We didn’t render the entire 45 minutes in the film because that probably would have gotten a little much. But Bob really did not want to show him just once or just a quick montage of it. He really wanted to make a substantial meal out of the actual walk.

“There is no motion picture footage of the walk. Even if you see the documentary (‘Man on Wire’), all you will see is a couple of still photographs. This recreation was very informed by an intense collaboration with Philippe.”

On Philippe’s whereabouts these days, Joseph volunteered, “He’s in upstate New York and he still has the actual wire that he hung between the two towers of the World Trade Center. It’s set up in his front yard and he walks on it every day.”

Asked how he trained to portray a tightrope artist, Joseph answered, “It was actually Philippe himself who first insisted that he teach me to walk on the high wire. Not everyone who is good at something is also good at teaching it. But Philippe is a fantastic teacher. He is such a positive thinker. And because he believed that I could do it, then I came to believe that I could do it. I think it’s when you believe in yourself that you are actually able to do things.

“We did this eight-day straight workshop together. By the end, I was able to walk on the wire using the balancing pole. And then practiced more as shooting went on. Certainly, I am not as good as a professional and someone who has truly dedicated his life to it. And my wire-walking double Jade Martin did a fantastic job. Robert Zemeckis also did a fantastic job of blending our two performances so that it’s really hard to tell which one is me and which one is [Jade].” 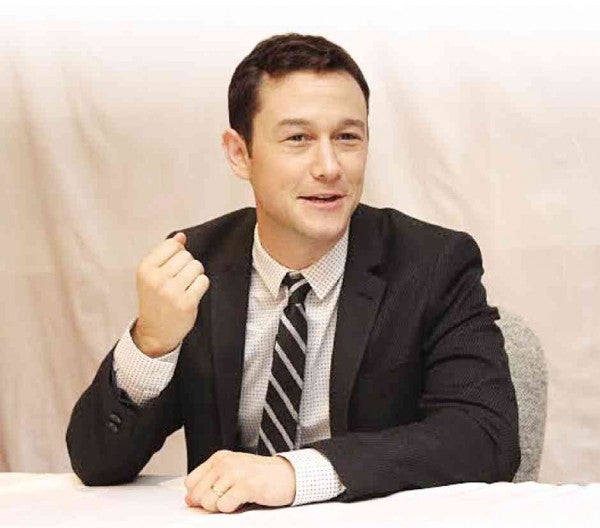 “IT WAS a lot of fun hearing my (acrophobic) dad [Dennis] yelp,” confesses the actor. RUBEN V. NEPALES

Joseph recalled his “baby steps” in learning to walk on the high wire. “I learned on a two-foot wire,” he pointed out. “When you lose your balance you can just step off. To shoot, we were on a 12-foot wire, which obviously is not very high compared to 1,300 feet in the air. But you would be surprised—12 feet is still very scary when you are up there because it is way too high for you to step off. But over time, it’s really just a matter of time and acclimation—the fear dissipated.”

Joseph explained why Philippe is a cut above (well, literally and figuratively) the rest: “I wouldn’t say his difference is the ability to conquer fear of heights or death because that is something that all high-wire walkers share. What differentiates him? It’s the difference between a ballet dancer versus a pop dancer. He is regal and he approaches it with grace that is unique compared to conventional circus high-wire walking.”

Joseph does capture Philippe’s ballet dancer-like grace and poise on the high wire.

“He is the one who had the brilliant idea to put that line between those two towers,” he continued about Philippe’s uniqueness. “There’s something to be said for that as well.”

Joseph stressed, however, that a high-wire walk is a mental game, more than anything else. “It’s something that Philippe really emphasized to me in teaching me about wire walking. Even more than the physicality, wire walking is a mental challenge because you have to have such focus. You can’t let your mind be distracted by something over here or there, like, ‘Oh look, I am way up high and what if I fall?’ None of that can happen.”

On the personal significance of the twin towers to him, Joseph reflected, “For anybody, whether you are from the United States or from anywhere else, the first thing you think of when you think of those two towers is the tragedy. I was here in New York City on 9/11. I remember it well and I think it’s important to remember that tragedy.

“But with that said, as with any tragic loss, it’s also important to remember the good things and the beautiful and positive images that you have in your head of whatever you have lost. That’s what this movie does—it celebrates a beautiful story about these two towers. It’s like when you grieve for a lost loved one. It’s best to not only focus on his death; you celebrate his life. That’s what this movie does.”

On a closing note, we congratulated Joseph on another feat—he and his wife, Tasha McCauley, welcomed a son last August. “I am very happy to be a dad,” said the beaming father.