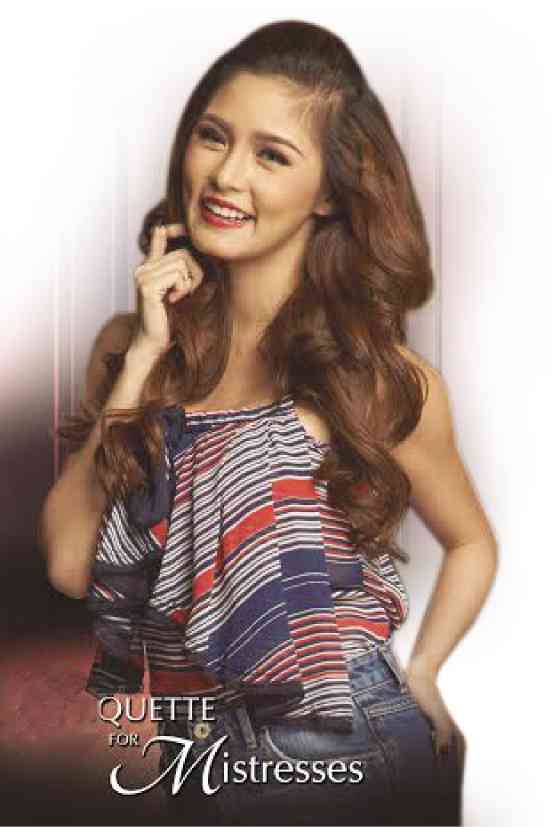 KIM CHIU insists her new film taught her a lot about life and love.

ACTRESS Kim Chiu, who started out as a lanky teenager in the reality program “Pinoy Big Brother” in 2006, said she initially had doubts about accepting the role of a kept woman in the Chito Roño drama “Etiquette for Mistresses.”

“I felt nervous upon hearing the title so I first asked for a copy of the script,” she recalled. “I’ve been in show biz for nine years now and I’ve only played wholesome girls.”

Kim added: “It was (costar) Ate Kris (Aquino) who said I should give it a try because it was time for me to mature and not limit myself to pabebe (cutesy) roles. She said I needed to accept projects that would prove I’m an actress, and a grown woman.”

Kim said the movie taught her a lot about love and relationships. “I learned that love is not just about physical attraction but also about respect and making the right choices.”

The 25-year-old actress said the movie “has opened my mind to the idea that a woman can love a man who is already committed to someone else.”

Kim, however, said it’s not a situation that she would wish for herself or for other women. “I don’t think I can do it. I believe that we are all answerable to our God. But it’s just me—I don’t mean to judge other people. We all learn from our experiences.”

Working with an award-winning director like Roño was a challenge, said Kim. “He would always warn me about teleserye acting. He taught me a lot of techniques, including the right way to breathe (while delivering lines of dialogue).”