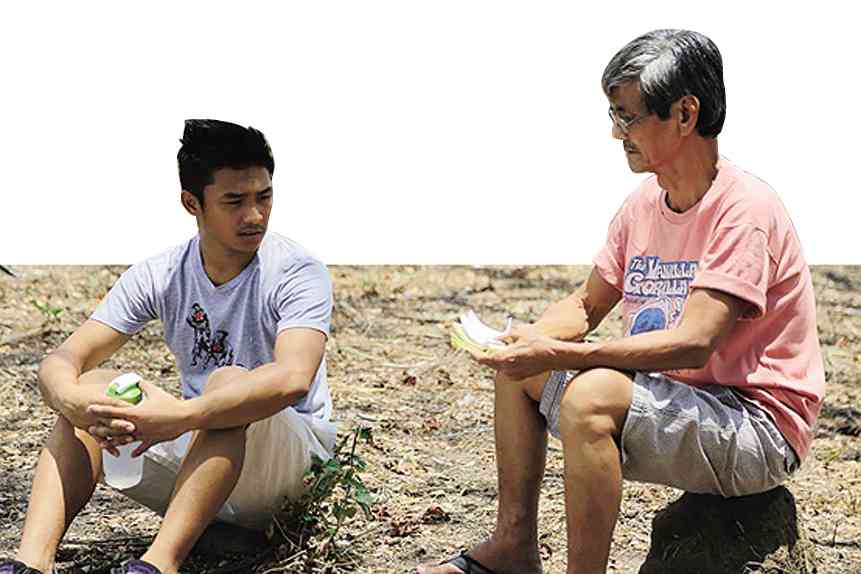 RONWALDO Martin (left) shares screen with poet Francisco Guinto in “Ari: My Life with a King,” which was shot in Porac, Pampanga province.

ANGELES CITY — A film about a young man and his discovery of the Kapampangan language through a local poet received the Best World Film award at the Harlem International Film Festival 2015 in New York last month.

Jaypee, who does not know how to speak Kapampangan, met Conrado, the “King of Poets” in Pampanga, leading the young man to discover his native language.

According to the film’s writer, Robby Tantingco, who heads the Center for Kapampangan Studies at Holy Angel University (HAU), the film aims to promote the use of the Kapampangan language among the youth.

“We wanted to produce a film that will showcase the advocacy of the university, and that is the promotion and preservation of local culture,” he said.

Tantingco said the practice of Pampanga poets in selecting or electing “kings” since the 1920s served as his inspiration to write “My Life with a King.” “I find this very strange and interesting at the same time. They elect among themselves the king of poets in the province,” he said.

“My Life with a King” is the first full-length feature film produced by HAU. Tantingco said HAU and the people behind the film were ecstatic about the international recognition that it received. He said the award was an appreciation of regional filmmaking in the country, specifically in Pampanga.

Carlo Encisco Catu, a senior student at HAU and an independent filmmaker, directed “My Life with a King,” while students, alumni, university officials and employees formed the production team.

One of the producers is HAU alumnus Ferdinand Lapuz, who produced also the internationally acclaimed films of Brillante Ma. Mendoza and other filmmakers.

Tantingco said people behind the film initially wanted to do a short film, but Lapuz encouraged them to make a full-length movie, saying it would have a bigger impact.

HAU had set aside about P1 million for the production of “My Life with a King,” which Tantingco described as small. “We got good discounts from professionals who helped us in the film. Other crew members were also volunteers,” he said.

He said “My Life with a King” is also in the lineup of the Vancouver International Film Festival, currently ongoing in Canada until Oct. 9.