Andrea Bocelli on the Pope, returning to Manila | Inquirer Entertainment

Andrea Bocelli on the Pope, returning to Manila 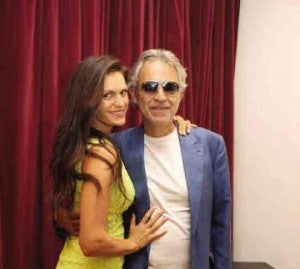 LOS ANGELES—We talked to superstar tenor Andrea Bocelli between two recent significant dates in his life—a day after his birthday on Sept. 22 and two days before he sang for Pope Francis in Philadelphia.

Clad in a light blue suit and white T-shirt, Andrea, alternately speaking in English and Italian, evoked boyish charm and a bit of a naughty humor. Told at one point that he invariably smiled when he talked about women, the Italian singer did not protest. “That’s true,” he quipped with a grin.

Veronica Berti, Andrea’s stunning, statuesque wife and manager, and Tony Renis, who cowrote “The Prayer,” one of Andrea’s biggest hits and who composed the standards “Quando, Quando, Quando” and “Never Never Never,” made the chat livelier with their interjections. Tony, David Foster and Humberto Gatica make up the team of musical legends behind Andrea’s newest album, “Cinema.”

“I will meet him in a few days,” Andrea said when Pope Francis’ trip, ongoing at the time of this chat, was brought up.

Asked to talk about “Papa Francisco,” who was born in Argentina to Italian parents, the 57-year-old performer answered, “I am very embarrassed to speak about this because I am nobody to speak about him. He is a man of God. He is so humble, smart and intelligent. I can say only that when I heard his voice on television for the first time, when he became Pope, I cried. I don’t know why.

“I was born and grew up in a small village where parents teach you that a man doesn’t cry—never. Men are not supposed to cry. But I cried because his voice had something very deep inside. I think that humanity is very lucky to have a man like this.”

When Veronica prodded Andrea to share with us how he first met the Pontiff and how he was invited to sing in Philadelphia, he asked her to tell the story instead.

Veronica gladly obliged. “It’s quite a fun story,” she began. “The Holy Father was on TV and Andrea said, ‘I would like to write a letter to just let him know that, like any other Christian in the world, I’m at his disposal, whatever I can be useful for.’ So I wrote the letter and sent it to an old e-mail address I had. I didn’t even know if it was still working or not.

“After half an hour, I received a call from the secretary of the Holy Father. I thought it was a joke. The voice said, ‘Can you send us the dates when Maestro Bocelli is available because we know that he’s very busy?’ I thought, is he joking? So we sent the letter with a few of the dates. They picked the first one. We met after two weeks.

“Andrea repeated to the Pope, ‘Whenever you want, my voice and my heart will be at your disposal.’ And that’s why we are going to Philadelphia. Andrea is going to perform in front of the Holy Father and over a million people at the World Meeting of Families. We’re very happy to be there.”

Added Veronica, “There’s another thing that the Pope said to Andrea. When we were explaining about the Andrea Bocelli Foundation’s projects in Haiti, he said to us, ‘That’s the fourth world. You have to be there. You have my benediction so go ahead, be strong. Just do what you can to fight the poverty.’ So we were also blessed by that.” 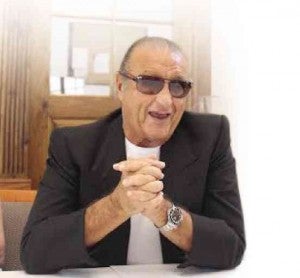 On his 2004 Manila concert, Andrea said, “I remember many things about that trip because it was very deep, also for my soul. I remember, for example, that the biggest success I reached was when I sang the ‘Sacred Arias’ because everyone there is very religious. I also remember the day I went around to visit a little bit of the country. I went to beautiful places.”

“When will I come back (to Manila)—I don’t know—because it’s up to you,” he said with a smile. “If you invite me, I will come.”

Complimented about his blue and white attire, Andrea grinned as he dissed, “I always allow my partners to dress me [up], as long as they allow me to undress them. I don’t care about how I am dressed, honestly. I am also grateful to my stylists because they take away a big problem for me to think about dressing. Veronica is also very careful.”

Still smiling, Andrea, who has been blind since he was 12, cracked, “If it can make you smile, the only thing I can recognize is if my pants are long or short.”

Veronica volunteered, “If he doesn’t want to wear something, I only have to say, ‘This is too young for you.’”

On how he celebrated his birthday, Andrea replied, “Working. Unfortunately, after lunch, I had to go to a theater in Los Angeles where I was going to have a concert (‘Great Performances,’ tied in with the album). Renee Fleming and I had to record something for PBS with Placido Domingo. We worked and then for dinner, we went to a restaurant with Tony, Humberto and David. We had a beautiful night but that’s all. Very simple.”

He elaborated on the obvious choice of LA as the perfect place to launch an album of 16 film songs. “Los Angeles is the land of the cinema and also of cinema music,” he explained. “To select this repertoire, I did a very simple thing, I tried to find the biggest masterpieces of this kind of music. For example, I remember when I was a child, I often heard (Frank) Sinatra singing ‘Moon River’ or ‘Old Man River.’ And Mario Lanza singing ‘Be My Love,’ for example. He was the first tenor voice that I heard in my life. All these songs are considered by everyone as masterpieces.”

The album includes his duets with Filipino-American Nicole Scherzinger (“Don’t Cry for Me Argentina” from “Evita”) and Ariana Grande (“E Piu Ti Penso” from “Once Upon a Time in America”). 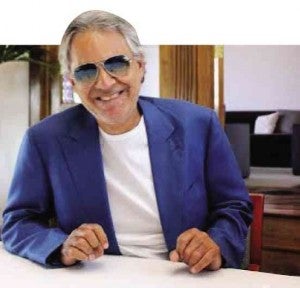 BOCELLI recorded the vocals of his latest album in his home in Tuscany. RUBEN V. NEPALES

On collaborating again with Tony, Humberto and David, who helped make possible Andrea’s “The Prayer” duet with Filipino singer Charice in a concert in Italy, the performer said, “When I met David the first time, my English was so poor. He joked that all I said was, ‘Pleased to meet you, thank you very much, thank you very much.’ They were the only things that I could say at that time because unfortunately in school, I studied French. I pronounced my first words in English when I was 25 years old.

“My immediate impression of David was that he was a very smart man and to work with him was a big pleasure for me. We work a lot because David works a lot but we also laugh a lot. We talk about everything—women for example—yes, why not? Because women stir feelings—for the composers and the singers, that’s very important.

“I have known Tony since forever. I was a child when I first heard ‘Quando, Quando, Quando.’ Tony is an incredible man because he is never tired. He has such a big passion for music, for his work. He’s a good example because sometimes I am lazy. I work a lot because it’s important for my family. I have three kids and I have to work. But I am very lazy.

“Humberto is the best sound engineer in the world. He has amazing ears. He knows my voice better than anybody else. Humberto also never gets tired.”

Tony added, “For the vocals, Andrea wanted to do them in his home in Tuscany, in Forte dei Marmi. This is the best place to go to work.”

Andrea explained why he recorded the vocal tracks in Tuscany: “If you want to sing in an inspired way, it’s very important to sing when, where, and if you want.”

With Veronica, Andrea has a daughter, Virginia, 3; he has two sons, Amos and Matteo, from his first marriage (to Enrica Cenzatti).

The father spoke about having a daughter: “In 12 years when she will look around and see beautiful boys, I will be very jealous. It will be very hard for me.”

Andrea stressed that he has no “typical day.” “Every day, I change the bed, the city, the restaurant, the food.” Then, breaking into a laugh, he quipped, “But I don’t change the woman, the only thing that would be interesting to change.”

The Italian star has certainly come a long way from the first time he sang in front of a lot of people (at his boarding school).

“When I got on the stage, since the audience was made up of kids my age and all my schoolmates, there was a lot of noise,” he recalled. “I remember that when I sang the first high note of this song (‘O Sole Mio’), there was an absurd silence. At the end of the show, I remember that they gave me an incredible applause, very loud. This was very strange for me—that boys my age would be so interested in this kind of thing. That was the first sign that there was something inside of me that touched people’s hearts.

“My teacher told me many times, ‘Remember that your voice is not your merit; it’s a gift from God.’ I grew up with this firm belief. Today, that continues to be my belief, even more deeply rooted now than it was then.”

With his successful career and accolades, Andrea emphasized that his life has been a blessed one. “I don’t expect anything in particular because my life already went beyond my dreams,” he said. “I don’t have much more to ask of life. I am a lucky man and I thank the heavens every day.”