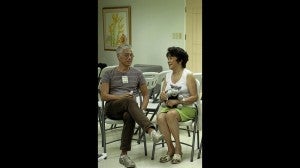 DIRECTOR Loy Arcenas and his star, Fides Cuyugan-Asencio, during a recent screening of “Niño” at the Inquirer. RODEL ROTONI

Opera star Fides Cuyugan-Asencio is raring to party. When she got the text message that her “comeback” film, Loy Arcenas’ “Niño,” had won the top prize in the Busan International Film Festival (tying with Morteza Farshbaf’s “Mourning” from Iran), Asencio yelped, “Hurrah!”

She was in the middle of a meeting.

Asencio said in a phone interview that she believed the foreigners appreciated that “Niño” is “subtle, and tackles universal issues like family dysfunction.”

After getting Arcenas’ message on Facebook, Asencio is preparing for another round of celebrations. “We’ve partied maybe thrice already,” costar Raquel Villavicencio told the Inquirer. First time was after the film won special jury prize and best supporting actor (for Art Acuña) and supporting actress (for Shamaine Centera-Buencamino) at Cinemalaya in July.

But should Arcenas, who attended the awards rites solo, spend the $30,000 prize from Asia’s biggest film festival on yet another bash? “That would be a lot of cerveza,” actor Acuña jested, also in a phone interview. “I’d like him to spend the money on his next project,” said Buencamino. Scriptwriter Rodel Vera suggested, “Maybe he could use part of it to blow up the film for a theatrical run.” Actually, Vera added, “I just revised the script for his next film.” (“I could pay my debts first,” Arcenas quipped. “Besides, I’ve yet to glimpse the money.”) 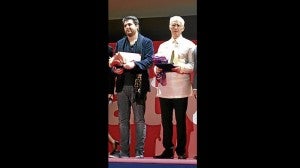 MORTEZA Farshbaf (left) and Arcenas onstage in Busan, with their trophies. LAWRENCE FAJARDO

“Loy’s a seasoned theater artist, but ‘Niño’ is his first film,” Villavicencio noted. “My greatest satisfaction over Busan is that he won on his first try.”

Acuña, who had worked with Arcenas in various stage productions, recalled, “Eight years ago, I told Loy that film was his medium. He has a keen eye for detail.” Buencamino said, “His training as production designer served him well.”

Filmmaker Laurice Guillen, Cinemalaya competition director, attended the film’s Busan gala premiere last week. She told the Inquirer via SMS (from Rome, where she is a member of the Asiaticafilmmediale festival jury): “The Korean audience was engrossed during both the screening and the open forum.”