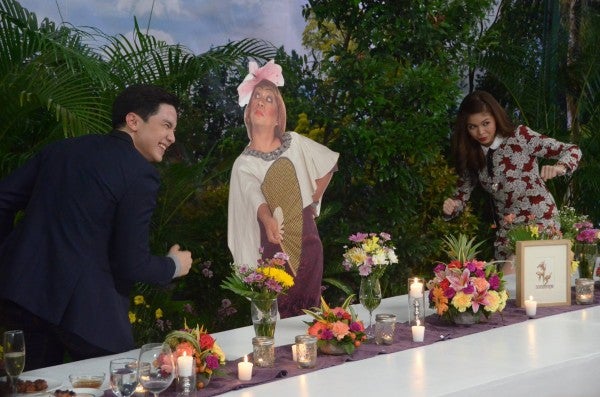 IF ONLY 11 million tweets can be converted to pesos, they’d all be rich, comedian Wally Bayola recalled a running joke on the set of “Eat Bulaga.”

The hashtag was cooked up to hype and amplify on social media the television couple’s first longish, face-to-face encounter after two much-talked-about but failed attempts.

For the past eight weeks, Alden and Yaya Dub only got to interact via split-screen. On their second monthsary yesterday, they finally got to eyeball, albeit separated by a long dining table.

Still, it was a Saturdate to remember not only for Alden and Yaya Dub, but also for their legions of followers, known collectively as AlDub Nation.

During the show’s telecast yesterday, host Joey de Leon reported that at midnight on Friday, tweets broke the 1 million mark, and quadrupled (4 million) after two hours.

On air, De Leon said he would be content if the kalyeserye scored 8 million tweets. By the end of the three-hour show, however, the tweets had reached 9 million and was expected to climb higher as Filipinos based abroad catch up and join the online conversation.

“I expect the figure to go higher because ‘Eat Bulaga’ airs later in the day in the other countries,” Sen. Tito Sotto, one of the main hosts of “Eat Bulaga,” told the Inquirer in a phone interview yesterday.

Bayola, who plays the kalyeserye’s resident gadfly (and witch-godmother to the AlDub pair), said in a phone interview that he couldn’t get his head around the idea of 10 million tweets. “But I realize it’s historic … we never thought we could break our previous records.”

For the #ALDUBTheAbduction hashtag, the tandem’s fans set another record, with 6.35 million tweets on Sept. 13.

“It’s phenomenal, there is no other way to put it,” said Sotto. “‘Eat Bulaga’ has been on television for 36 years. If there is one thing we’ve learned, it’s to keep up with the times. Sakyan at sabayan ang panahon (Keep up with the times). That’s why ‘Eat Bulaga’ is present in social media. We even have our own app, which allows fans to play ‘Pinoy Henyo’ with us.”

“The secret [of our success] is the love of the fans for AlDub,” Fagar said. “After all, Alden and Yaya Dub impart a positive message to their fans. It was just accidental that turned into something magical: a long-distance love affair, a fairy tale come true. It’s all about love.”

Director Poochie Rivera agreed: “It’s pure magic,” adding that it’s “organic” as well. “The fans come up with the hashtags and we choose the one with the most likes and shares as the hashtag of the week.”

In a media forum during the Internet and Mobile Marketing Association of the Philippines Summit, Jenny Ferre, creative head of “Eat Bulaga,” explained that “more than accidental, the AlDub phenomenon was experimental, too.”

“The fans are part of the story. They join the conversation. They often give us suggestions for the story line,” Sotto said.

“Well there’s no pressure on us, who work in front of the camera,” Bayola said. “It’s the writers who get stressed out. But the good thing is, the writers can always rely on AlDub fans to share good ideas and positive feedback.”

Perhaps the pressure is on the competition, particularly ABS-CBN’s “It’s Showtime,” which scored 537,000 tweets at the same time “Eat Bulaga” breached the 11 million mark.

Bayola said: “We are just here to entertain people; I am sure that [fellow comedian] Vice Ganda and the other hosts of ‘It’s Showtime’ have the same goal.”