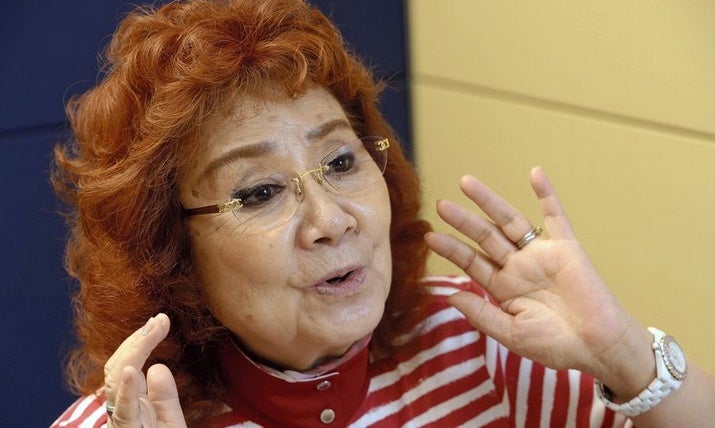 Masako Nozawa, the Japanese voice actor who plays Goku, speaks about “Dragon Ball” in an interview. PHOTO FROM THE YOMIURI SHIMBUN

A new series of the popular anime “Dragon Ball” is on Japanese TV for the first time in 18 years.

The Fuji TV network launched “Dragon Ball Super” in July. Aired on Sundays at 9 a.m., the series was specially drawn for TV by Akira Toriyama, the creator of the series.

“In Goku’s words, I feel like, ‘Ora, saiko daze!!’ [I’m the greatest!!],” Nozawa said, recalling the moment the broadcast of the new series was announced.

After the last “Dragon Ball” TV series was aired, Nozawa carried on with various related projects like movies and games — but the whole time, she was longing for a new series.

“No one knows how the story will unfold this time. I get so excited thinking about a whole new world awaiting for us,” Nozawa said.

“Dragon Ball” revolves around Goku, his friends, and their journey to seek out the Dragon Balls, clashing against epic villains threatening the Earth, like Frieza, Cell and Majin Buu, along the way. Collecting seven Dragon Balls is said to make your dreams come true.

The original manga was serialized in weekly magazine Shukan Shonen Jump, published by Shueisha Inc., from 1984 to 1995. Including the ordinary and special editions, the comic has sold more than 230 million copies around the world. The anime version has 508 episodes under its belt, running from 1986 to 1997 under the title “Dragon Ball” as well as its sequels, “Dragon Ball Z” and “Dragon Ball GT.”

Marking the start of the new series, Toriyama released a statement saying it will present a “completely unexpected story.”

“It’s going to go beyond even the universe,” Tori-yama said. “Fun, thrilling stories will unfold over an enormous Super Dragon Ball in a simple and cheerful way.”

The new series takes place on an Earth at peace after the defeat of Majin Buu — but not for long. The god of destruction known as Beerus awakens from his long slumber, while Frieza the feared “Cosmic Emperor” revives. Fans should also look out for an unknown world called “the sixth universe,” as well as a massive Super Dragon Ball.

“The new series features characters with unimaginable strength — Beerus can easily crush Goku even with all his training,” Nozawa said. “It’ll likely be a super-fun story packed with stunning battles.”

Dubbing Goku, Gohan and Goten seems difficult — but not for Nozawa, who “never thought it was difficult.” How does she do it?

“Goku grew up in the mountains. Gohan is a model student, and Goten is a naughty boy,” No-zawa said. “My voice naturally adjusts to the characters when I think about how they grew up and their personalities.”

Nozawa has her own way to keep her voice in good shape — whenever she takes a bath, she scoops up hot water, inhales it through her nose and spits out the water.

“It gets rid of all that dust I pick up during the day, and it clears up my voice,” the voice actor said. “But when I tell people I do that it makes them laugh and say ‘Do you really do that?’”

Nozawa’s voice acting career now spans more than half a century. She has dubbed a huge variety of popular characters, including Kitaro in the first two series of “GeGeGe no Kitaro,” Tetsuro Hoshino in “Galaxy Express 999” and Rascal in “Araiguma Rascal” (Rascal).

Anime production has developed over the years — hand-drawn, celluloid-based anime has been superseded by digital technology; something that Nozawa has experienced over the course of her lengthy career. She even heard once that “voice acting will be replaced by machines someday,” but she disagrees.

“I don’t think mechanical voices can make characters come alive. What voice actors do is breathe life into characters. I want them to be proud and have faith” in their work, Nozawa said, cheering on young voice actors.

Nozawa has played the main characters of many anime masterpieces, but she always felt a special connection with Goku, whom she calls her “alter ego.”

Her favorite scene from the anime is when Goku complains of pain after he gets shot by the Red Ribbon Army, the world’s most evil armed forces.

“Even when he was shot, he just cries, ‘It hurts’ in a funny voice. He’s not snobby at all. His simple personality comforts me,” Nozawa said. “His biggest charm is his character, which stays the same no matter how strong he gets.”