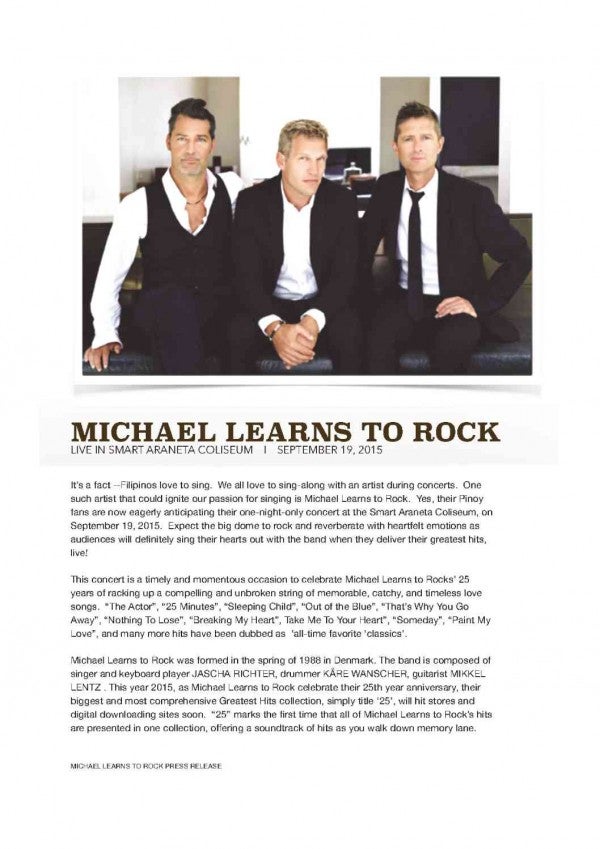 The men of the Danish pop band Michael Learns to Rock brought with them “a lot of unforgettable moments” from the last time they performed in Manila back in 2008. But for the group’s drummer, Kåre Wanscher, there was one thing that really stood out: The “wonderful” Filipino people’s voices.

The men of the Danish pop band Michael Learns to Rock brought with them “a lot of unforgettable moments” from the last time they performed in Manila back in 2008. But for the group’s drummer, Kåre Wanscher, there was one thing that really stood out: The “wonderful” Filipino people’s voices.

“We miss our Filipino fans and we hope to meet a lot of them this time. But most of all we look forward to hearing the audience sing!” Wanscher told the Inquirer in an e-mail interview.

Formed in 1988, the band—also composed of Jascha Richter on lead vocals and Mikkel Lentz on guitar—will hold a one-night show at the Smart Araneta Coliseum on Sept. 19, and is expected to perform some of its catchy, well-loved hits and karaoke staples like “The Actor,” “25 Minutes,” “Nothing to Lose” and “Paint My Love.”

“We will play the songs people want to hear and, of course, also a few of our [newer] songs,” Wanscher said. “There will be some visual effects and, hopefully, a big sing-along party!”

The concert is mounted by CCA Live Entertainment and Midas Promotions. For tickets, call TicketNet at 9115555.

What are your thoughts on the band’s huge success in Asia over the years?

We recognize that our career is based on a lot of coincidences and that we have been very fortunate to have all the success we have had. At the same time, we feel that we’ve worked hard to be present in Asia, and went to places not many other bands go.

The reason behind our success, I guess, is that our music, for some reason, seems to have a huge impact on Asian people. It’s like we share exactly the same emotions; we can communicate with them just with music.

What would you say is the definitive Michael Learns to Rock song?

To us, such songs as “The Actor,” “Someday,” and “25 Minutes” are what the band is all about…But also, the song “Scandinavia” [is special] because it tells the story of where we live. It’s too hard to just mention one song!

Did you ever imagine that you will still be playing around the world after 25 years?

No! We never expected to become pop legends.

What’s the most important thing you’ve learned about the music industry?

Be inspired, but stay true to your heart! We never really tried to adjust to trends in music—we just did the music we liked and that’s what made us stand out.

How would you describe your music now?

I don’t think we’ve changed much, which I think is a positive thing. We never deliberately tried to change. We always do what we like…and somehow, it always ends up sounding like Michael Learns to Rock.

Are you working on new material?

Yes, we are recording at the moment and will have new stuff out soon!