Keeping up with Boots and her King 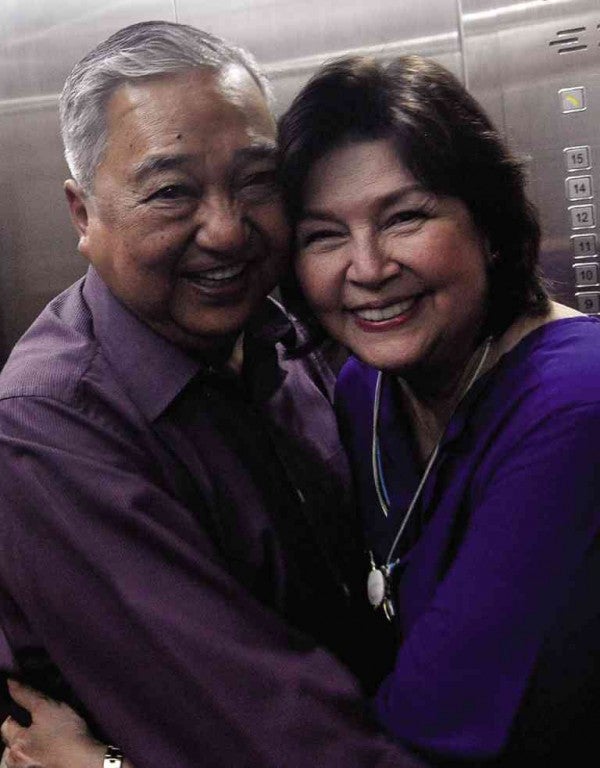 “While there is great love for each other, we still maintain individual space for our respective former partners in our hearts,” said actress Boots Anson-Roa, who celebrated her first wedding anniversary with husband, lawyer Francisco “King” Rodrigo, in July.

“This year, King refurbished his house at Canyon Woods in Tagaytay. [Our plan was to]…have it blessed on Aug. 9 in memory of the two (Pete and Olga). Our relatives would be there, too,” said the actress and concurrent president of the Movie Worker’s Welfare Foundation or Mowelfund. “We continue to defer to the memories of our respective partners. King still wears the chain necklace that Olga gave him.”

King sometimes talks in his sleep, Boots said. “The times that I heard him sleep-talk, he mentioned two names—that of his mom, who is 100 years old, and his late wife,” Boots told the Inquirer. “I jokingly tell him, ‘I’m OK with the two, but if I hear you mention a different female name then you’ll be in trouble.’”

Boots is the host of the weekly children-oriented program “LolaBasyang.com” on TV5. Boots, who taught mass communication subjects at the Ateneo de Manila University and the University of the Philippines for 13 years, said the show was the perfect conduit to impart knowledge and values to kids.

“There are 40 to 50 students in a class. What you can teach them in three hours—the usual length of a class—you can share with more kids in just an hour through this show. I consider this an extension of my teaching,” Boots pointed out. “How wonderful it is that the Lola B character is just like me. She wears slim pants, doesn’t sit in a rocking chair and doesn’t wear thick eyeglasses—thanks to a recent laser operation. B is for Basyang, for blogger and for Boots.”

Are you a techie?

Only in the sense that I send e-mails, do Facebook and search the Internet. I’m learning how to blog for this show. On my cell phone, I know how to do Facetime.

I’m really a private person. I don’t want to expose myself to the world. I don’t see blogging as a way to earn money. I’m only starting to write—

just let me become at ease with it.

Maybe you can write about your work for Mowelfund on your blog.

I keep saying that because of what I do for Mowelfund, I will be able to save myself from spending 50 years in purgatory. My work there is really a devotion. It’s my way of giving back because the industry has been so good to me.

Is it true that the agency is currently in a financial crisis?

It’s been like that for many years. We’ve had to do a lot of cost-cutting and fundraising since 2002, when our net share of the amusement taxes (of the annual Metro Manila Film Festival) was reduced from 60 percent to 20 percent. At that time, we got only P2.6 million a year but our operational cost was already at P13 million [when I joined Mowelfund in 2002].

How do you cope?

We had to reduce the number of personnel and the benefits of the staff. We were able to cut down expenses to P10 million. Recently, our share was increased to 50 percent. Also, the membership fee, which had been P300 per year for the last 40 years, was increased to P500 a year in March 2015. [Now] they can avail of a total of P75,000 in medical reimbursement and hospitalization, among others.

We’ve hosted fundraising events like celebrity golf, bowling and poker tournaments. In each event, we are able to raise between P300,000 to P500,000. On Sept. 30, we will have a horse racing event. When I throw birthday parties, I tell my guests to issue a check or donate cash to Mowelfund instead of buying me gifts.

As its head, what is your plea?

I hope our donors will not have donor fatigue. I suspect that they already see a peso sign on my forehead. Tita Rosa Rosal, one of the most effective fundraisers and blood donation experts, once told me, “Do not be ashamed to seek help because this is not for you.”

“LolaBasyang.com,” directed by Perci Intalan and produced by The Idea First Company, airs every Saturday at 7 p.m. on TV5.