From wicked coach to guardian angel 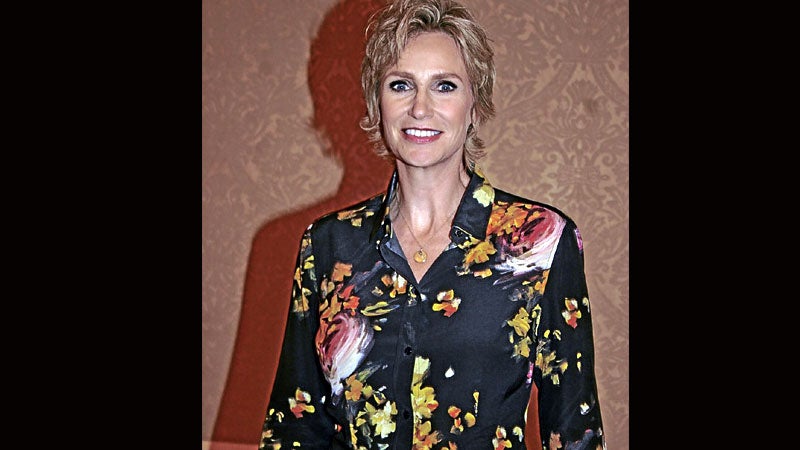 LOS ANGELES—Jane Lynch goes from deliciously wicked Sue Sylvester in “Glee” to a guardian angel named Amy in her new TV comedy series, “Angel from Hell.” As the title suggests, Amy probably has more in common with Sue. She’s an angel in human form who loves to drink and lives in her car. That’s why Allison (Maggie Lawson) is not sure if Amy is truly her guardian angel or just a crazy stalker.

Jane’s star continues to rise—a boom that began late in her career, thanks to the tracksuit-wearing, conniving cheerleading coach that “Glee” fans loved to hate.

After playing Miss Hannigan in “Annie” on Broadway in 2013, Jane keeps her love for the stage with a cabaret show, “See Jane Sing!” that she tours around in the United States.

The openly lesbian Jane, 55, quipped about her separation from her wife of three years, Lara Embry: “I am divorced, so I am a gay divorcée.” The following are excerpts from our talk with Jane.

I loved the script. I laughed out loud. This notion that there is somebody out there who has only your best interests in mind, is your biggest fan and lives to make sure that you have an awesome life is a fantasy that we all have.

Amy is a hot mess. She looks like she is homeless and she is completely in contrast to Allison, who is very buttoned up, checks all the boxes in her. Amy is exactly the kind of guardian angel that Allison needs—somebody to be the bull in her china shop, to set off a bomb in her life which she does. I loved that.

I also love the relationship between Allison and Amy. It’s kind of “The Odd Couple” in a way. They are completely different, yet they need each other. And you will see in the series that Amy also needs Allison to help her with some human things.

Do you think people will respond to this show the same way they did with “Touched by an Angel” and “Highway to Heaven?”

I don’t know but I think this notion that there might be a person out there who is watching over you and has your back is just very attractive to human beings, period. It’s just funny and wonderful that in this show, she is a mess and she is really flawed.

But to Amy herself, she is absolutely perfect and she doesn’t have that critical voice. She is not like, oh, I have got to stop drinking. She’s fine with the fact that she drinks all day long. She is a different kind of angel. The people who watch “Highway to Heaven” and “Touched by an Angel” might be interested in this show. I think it might scratch that same itch.

So is the show spiritual in a way?

It is but it’s never going to hit you in the head. It’s kind of deeply inspired in a spiritual way.

Do you think you have a guardian angel?

Sure, I do. I don’t know that I have ever looked at him or her. I am not unconvinced that it is my dog Benjamin, a wonderful dog who is just floating above the rest of us in terms of his own spirit. He’s pretty amazing.

And who is the person looking out for you?

I don’t know that there is a person but all of us are open to it. We live on a very dense planet. I think there are subtler energies. I think about that all the time. There are moments when I go, oh, it feels like grace.

Was there a turning point in your life that made you spiritual?

Yeah, I got sober. Ironically, I have been sober for about 25 years and now, I am playing a drunk. But the day I stopped drinking many years ago, I had been struggling to get sober. And then I got struck sober. In one moment, the desire to drink was gone. And it stayed gone.

I know that is not the case for a lot of people. So it was really a moment of grace. Even before that, I started thinking about things like grace and spirit. It was certainly not the “ego” me and it was not Jane. It was something greater. A power greater than myself.

What’s the philosophy that you live by?

Got an hour? Truly, it’s all about that I have to stay in my heart. Anytime I start to feel fearful or anxious or worry about this thing or that, I just know how to be very still and be present. That’s as simple as it is.

What advice would you have given your younger self?

Relax and don’t worry so much. I was a big worrier.

How did worrying a lot impact your earlier life?

This is probably where the guardian angel comes in. I have ended up doing everything I want and more in my life because there is something in me. It almost got flooded out by anxiety and worry when I was younger. There is something about me that is very hooked up and knew enough to just relax.

When did you learn to relax?

It was probably in my late 30s or early 40s when I stopped worrying when the next job would come. And you know what, the jobs started coming like crazy.

Who are your mentors in your life?

Nobody did. I don’t have that person. In fact, one of the things that fueled me was the fact that I didn’t have that. So I was forced to be my own best friend and best advocate. I didn’t really have anybody who said, “I ‘see’ you.”

I spent a lot of my younger life looking and searching in vain in relationships, friendships and teachers—trying to find somebody who “sees” me. I just didn’t find that somebody. It was really left to me to go on my own fumes.

Does the responsibility of having the lead role in this show sometimes scare you?

The fact that it’s a starring and a lead role, I don’t think about that very much because it makes me anxious. On other days I am like, yeah, it feels good and it feels like I can do this sort of thing. But I am an ensemble player. I have three other actors who, in my perception, are as important to this project.

I am the producer of this show so I have skin in the game. I get to participate in every aspect of production so that makes me really happy.

What did “Glee” bring you?

Steady employment and playing a character that was so outrageous and so well-written that every week, it made my jaw drop. It was just a joy. I loved working with all those people. I loved Matt (Matthew Morrison) and I still keep in touch with him. Chris Colfer lives down the street from me. I see these guys a lot.

Do you stay in touch with your other “Glee” coactors?

I watched Darren Criss in “Hedwig and the Angry Inch” and he was absolutely amazing. When I was there, Jenna Ushkowitz was in the audience. Everybody keeps in touch, which is nice. Those kids are in their 20s now. They are friends through the whole time. They hang out together and they really love each other. They will probably be friends for the rest of their lives.

Would you be up for a “Glee” movie?

Oh sure, if they paid me enough (laughs). No, I would absolutely do it.

Can you talk about your cabaret show tour?

It’s the best and it’s so much fun. It’s called “See Jane Sing!” I am traveling around the country with the show. My friend Kate Flannery, who was Meredith the drunk in “The Office,” is in the show with me. I have a five-piece band. It’s about an hour and 10 minutes—fast paced and lots of eclectic stuff. I have jazz stuff and some obscure standards—if there is such a thing—and some reinterpreted Broadway stuff that you won’t even recognize the songs.

My friend Tim Davis, who arranged all the vocals on “Glee,” sings with us as well. It turns out he’s a wonderful crooner. We sometimes do these really tight a cappella three-part harmonies. It’s just the best. We are doing it in big theaters, not in little theaters where cabarets usually are.

We are calling it a cabaret for lack of a better term. There is no dancing because I can’t dance.