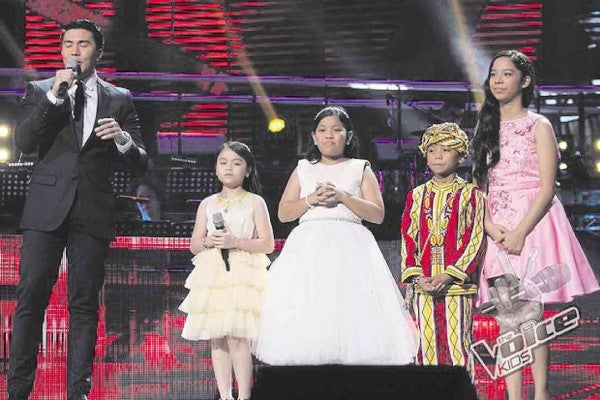 The second “The Voice Kids” finals two weekends ago was, all told, less involving than last year’s first edition, which was made eventful by Lyca Gaira-nod’s victory.

Lyca’s win was exceptionally involving and moving because it called to mind Nora Aunor’s own “life-changing” triumph on “Tawag ng Tanghalan” decades ago—which ushered in a new era not just for her, but for the country as a whole, because it made being truly Pinoy “in” again.

The fact that, after her victory, Lyca hasn’t been able to duplicate Nora’s iconic feat and seminal influence doesn’t diminish the possibility of that key consequence happening again. And it underscores, on point of contrast, the fact that this year’s tilt offered no such rallying point and thematic focus.

This comment could perplex some readers, because “The Voice Kids 2” did have a couple of “truly Pinoy” final-finalists: Like Lyca, Elha Nympha is also impoverished and a survivor of the city’s mean streets, while Reynan Dal-anay belongs to an ethnic tribe, and indeed made it a point to underscore that fact in his appearance and performance. —But, his ethnicity was over-exploited to some extent, in our view, so we felt too “obligated” to rally to his side and cause.

In any case, when this year’s Final Four competed, the thrill of the tilt was, in addition, fuzzed up by the fact that each child was paired with an adult celebrity singer—who was given too much participation and thus diminished the necessary principal focus on the young contestant himself or herself:

When Reynan did a duet with Gary Valenciano, he tended to fade from view because Gary was too frenetic and all over the place.

In addition, he was dressed in too attention-calling a fashion—and he had a hard time getting out of his voluminous coat after its sleeve experienced a wardrobe malfunction.

Similarly, when Elha sang with tenor Jed Madela, he tended to dominate the number. Billy Crawford did better in partering Esang de Torres, but the number they did didn’t allow her to score enough vocal points.

As for Sassa Dagdag, her ka-duet, Sharon Cuneta, was so vocally superior to her (and the young final-finalist also didn’t sing well that night) that she practically vanished from view—not a good outcome for the struggling tween vocalist.

At the end of the Saturday telecast, it was shown by the first voting results that there was a clear (unnamed) front-runner who scored 30 percent of the votes.

Was it Reynan? Not sure at all. Was it Elha? A birit “higher than high” note she had unleashed at the end of her duet with Madela on Saturday had made us sit up and pay impressed attention.

A part of us hoped it was Esang—but, her weak showing in her duet with Crawford miffed us. That clearly undemanding song choice gave her precious little opportunity to come on like a singing star, so we mentally chided the unknown person who had selected it.

The following night, the four finalists came up with “power” ballads, and thankfully, Esang fared better. But, Elha was in top birit form, so she was definitely in the running.

But, we thought that the choice of a romantic song for her to interpret was a bad gambit for the child singer that she professed to still be, despite her age and heft.

Finally, finally, all speculations became moot and academic as the tilt announced its winner—at 42 percent of the votes, it was Elha! We still think that she’s too old to win a child singing competition, but there it is. Those who voted for her must have been impressed with her “birit factor,” and her “bananacue vendor” back story.

Another note: If she was the finalist who had gotten 30 percent of the votes last Saturday, her showing had improved by 12 percent on Sunday, which showed that her performance that day had won her even more supporters.

Next in the total vote count was Reynan with 31 percent—perhaps due to the “ethnic factor.” And “our” bet, Esang, was third at 19 percent, while the clearly too mature Sassa was fourth at only 8 percent.

We congratulate Elha for winning and hope that her prizes will help turn her family’s prospects around. But, being already 11, she doesn’t have enough time to really make it as a child performer, so we hope that she can successfully make the eventual transition to tween singer.

As for Reynan, we’re glad that he’s been able to focus the public’s attention on our tribal minorities, but feel that the way he was handled and “framed” was a mite too exploitative. —And, all those costumed dancing, prancing relatives around him were really a bit much!

What about “our” Esang? Her last song number showcased her young stellar promise effectively, so we know that she can still become a singing star in her own right despite coming in at only No. 3—that is, if her hand-lers plot her career well.

Summing up: Season 2 of “The Voice kids” was not as notable as the first season, which is why, up to the time the winner was announced, it wasn’t clear who he or she would be—which made Elha’s “42-percent” showing a big surprise.

If ABS-CBN wants the third season of “The Voice Kids” to be the best one yet, it should make it a point to really learn the right lessons: Namely, look for very young singers (5 to 8 years young), don’t give them any romantic songs to sing, and focus on the talent rather than the back story. That’s it!