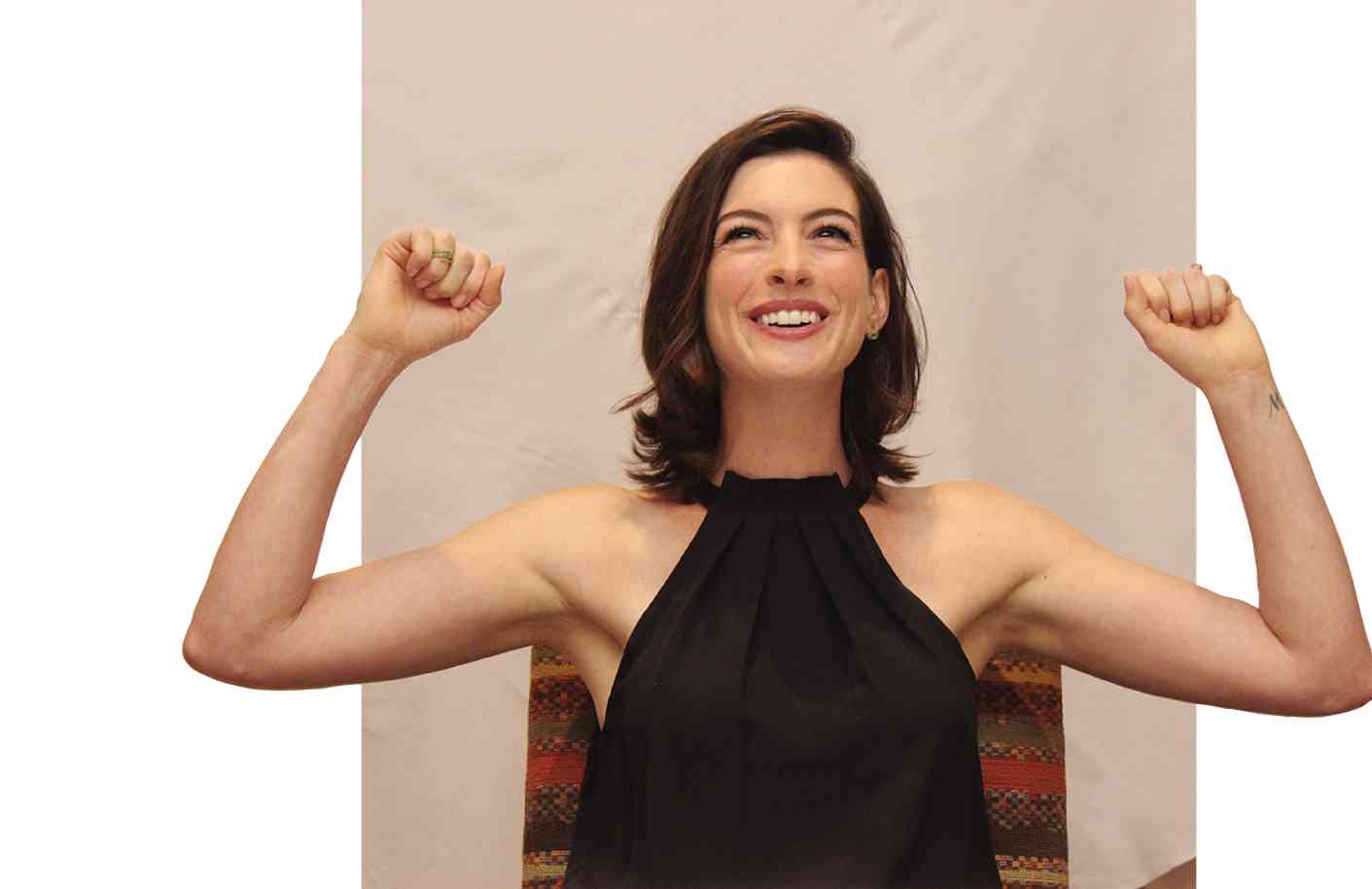 LOS ANGELES—It took three weeks for Anne Hathaway to relax and stop being tongue-tied around her esteemed costar in “The Intern,” Robert De Niro. The actress made this admission in a recent interview at the Crosby Street Hotel in New York’s bustling SoHo neighborhood.

In their first time to work together, Anne and Robert have a nice, sweet chemistry. She’s Jules, founder of an online fashion site, which launches a novel concept of hiring seniors as interns. Robert’s 70-year-old widower Ben becomes the titular character in the comedy written and directed by Nancy Meyers. Jules runs her fashion business, while Matt (Anders Holm) takes care of their daughter and house.

Anne, one of the gifted actresses of her generation, need not have fretted about acting opposite the De Niro. Anne’s natural charm, ease and sincerity complement her scenes with the legend and throughout the movie.

The film’s plot about a woman owning a company and its myriad challenges and complications that also invade her home life inspired talk about gender inequality in Hollywood.

The following are excerpts from our interview with Anne, who is looking even lovelier these days.

Can you talk about one specific moment when you thought, I am in a scene with Robert De Niro? 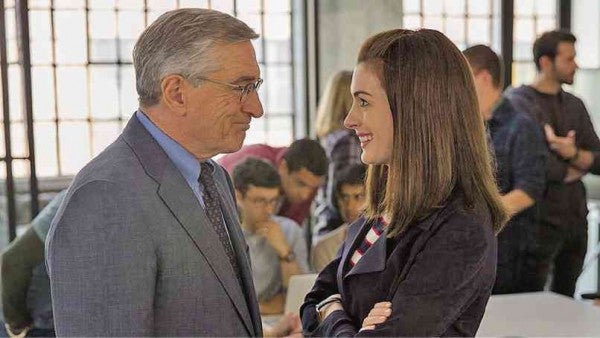 IT TOOK Hathaway a few weeks to stop being tongue-tied around costar Robert De Niro on the set of “The Intern.”

There were so many, constantly. It took me a few weeks to stop feeling tongue-tied around him and that can happen to me, anyway. I have all these memories of the early moments of filming of either me standing next to him in silence, trying to think of something to say and then coming up with a really lame joke. About three weeks in, I finally relaxed. We just started shooting the breeze every day. He was so easy to talk to after that.

I had a moment where I was really like, oh my gosh, I am essentially dancing with Fred Astaire here—it feels that big. It’s the Facebook scene where we are eating pizza. That’s a nice big, long scene. We shot it at night—a very quiet set, just the two of us. We did a take and I got so lost in the chemistry of it and how good it felt that when they yelled “Cut!” I actually had forgotten that we were acting. To do that with De Niro—that’s definitely a very big feather in your cap as an actor.

Who would you like to be your intern in real life? And what’s the best advice you have received?

There are so many. I would love to spend time, in any environment and in an extended way, with Gloria Steinem. She is brilliant. I met Olivia de Havilland a few years ago. She just blew my mind. It would be really fun to be with her.

I would never in a million years consider asking Valentino to be my intern, but I have a very dear and deep relationship with him. He teaches me a lot, but he is no one’s intern (laughs).

In terms of the best advice that I have ever gotten, the first one I got as a film actor was from (director) Garry Marshall. It was a gift, a gem piece of advice to get when I was starting out at 17 years old. We haven’t started making “The Princess Diaries” yet.

He said, “I can’t promise you that this movie will be successful. I am going to do my best and you are going to do your best. But we are not really in control of when a movie finds an audience, if it finds an audience. The only thing we can control is the time that we have making it. I am planning on having a great time making it and I hope that you plan on having a great time making it, too.”

That has really influenced me. I have been working now for 15 years or something. I try to do that on every set that I can, to just say, look, this seems great on paper and everybody hopes for the best. The only thing we can really focus on is the present. So I try and enjoy every experience I have and be somebody who is fun to work with.

An interesting component of this movie is the double standard—what men who run companies are allowed to do versus women who are in charge and the different pressures they face.

Thank you for bringing up that point. I wish that we didn’t have to have that question and I wish that there wasn’t a double standard. But then, of course, there might not be a movie (laughs). Have you seen the Amy Winehouse documentary (“Amy”)? You have to see it because it’s so brilliant. Tony Bennett is talking about Amy—if you can ride it, if you can live life long enough, then life will teach you what you need to know.

I think like that with success because obviously, you are so privileged if you are able to enjoy success. But it’s not like it’s a fairy tale through and through. You have to learn how to manage it. You have to learn patience, grace and humility when the success falls away; and fortitude to learn how to get back to it. It is not gender-specific, but the particular stresses that fall on each of us can become gender-specific.

That being said, one of the things that got me really excited about this movie was Jules and Matt’s relationship and being able to have an example within our cultural landscape now of a young woman who is the breadwinner in her family and a husband who has decided to be the caregiver in their household. To watch the two of them navigate that and in a messy way and not perfectly at times… we haven’t had enough of those examples out there. Maybe it’s a chance to open dialogue or help people.

Do you think gender inequality is less prevalent in Hollywood than in other fields?

Sadly, I think the gender disparity is across all fields. There’s a lot of strides to be made. In Hollywood specifically, we need better roles for women. 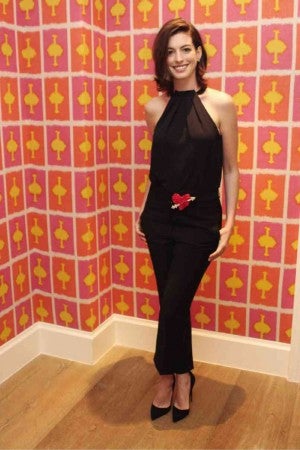 We need studios actively looking to launch franchises for women. We need more female superheroes with their own franchises. If this is the moment of the superhero, then we need the ladies up there on the screen.

If we start to do that, then we will see a bigger increase in the pay (for actresses) because so much of what dictates the terms of your contract is the size of your role. If you are always playing the second banana behind the big male lead, there is always going to be a pay gap.

So we have to be more sophisticated in the approach. It’s not a hopeless situation. It absolutely can be changed. In the last 15 years, there’s never been so much energy and not just from women but from men too who don’t get the inequality and want to see a change. I think it’s a matter of time and perseverance.

It’s frustrating. I hate reading the statistics. They are discouraging, but they also ignite a fire in my belly. I am sure a lot of other people feel the same way. I would like to give like three billion cheers to Jennifer Lawrence for negotiating the first US$20-million contract for a woman. How brilliant that she stood by her guns and said, “I know that I am worth this.” We just need to clone Jennifer Lawrence and everything will be fine (laughs).

In the movie, your character talks with De Niro about burial. Have you thought about that in real life?

When you shop online, do you use your real name?