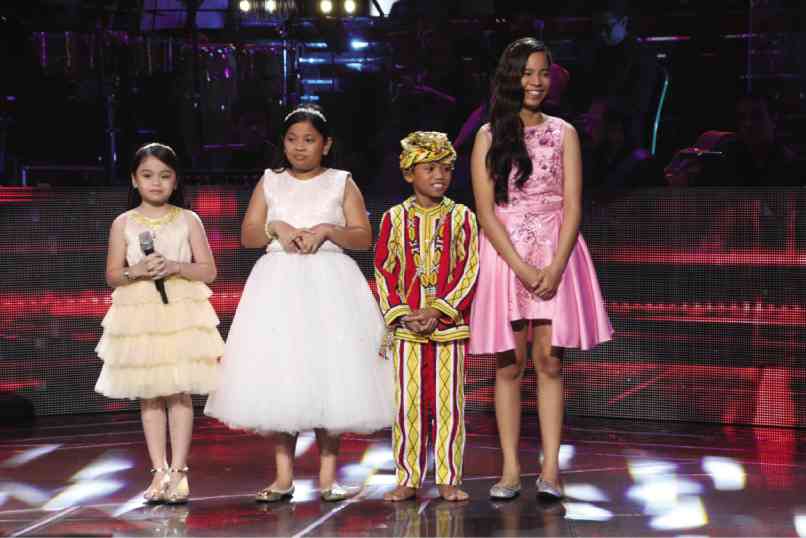 NEW YORK—Following a long flight, my mother and I have just arrived safe and sound in New York. The next day, I’ll hit the ground running for “Allegiance” with a fitting in the morning and rehearsals in the afternoon.

And all throughout the flight, my mind was swirling with the wonderful memories from the weekend’s grand finale of “The Voice Kids Season 2.”

As many of you have seen on TV, all four finalists—Elha Nympha, Esang de Torres, Reynan Dal-Anay and Sassa Dagdag—brought their A games to Saturday and Sunday’s competition, giving the audience at Resorts World as well as all those watching at home something very special.

From their duets with celebrity guests—Jed Madela with Elha, Billy Crawford with Esang, Gary Valenciano with Reynan, and Sharon Cuneta with Sassa—to their upbeat selections, and finally to their power ballads, they all gave the performances of their very young lives. Elha, representing Team Bamboo, took home the title with a whopping 42.16 percent of the total votes. She’s the first member of Kamp Kawayan to win a “The Voice” trophy.

Only a few months after her father’s passing, Elha stepped into the “The Voice Kids” studios at ABS-CBN and sang “Vision of Love” for her Blind Audition. Coach Bamboo was the only one who turned for her, realizing that there was something special he could work with here. (By the way, both winners of “The Voice Kids” are single-chair turners; Coach Sarah was the only one who turned for Season 1 champion Lyca Gairanod.)

For her Battle Round, Elha edged out fellow Kamp Kawayan members Paul and Kate with a soaring and beautiful rendition of Alamid’s “Your Love,” and for her Sing-Off, she performed Gary Valenciano’s “Natutulog Ba ang Diyos,” which was dedicated to her late father. With that performance, she merited a place on Team Bamboo’s Top 2. And the rest, as they say, is history.

Truth be told, any one of the Top 4 could’ve taken home the prize, as I firmly believe they all deserved it. Each of them gave heartfelt, emotional and vocally strong performances that we all are proud of. Overheard in the theater, one person expressed how talented all the kids were, and that the title could have gone to anyone.

But this season, the title, and all the accompanying prizes, go to Elha. Congratulations to the little banana cue vendor with the big voice. You truly deserve every wonderful thing that happens to you from here.

I would like to take this opportunity to thank as many people as possible who made Season 2 of “The Voice Kids” a stunning success day in and day out: to executive producers Rose Casala and Peter Dizon for their patience and grace under pressure to deliver great shows week after week; to director Johnny Manahan and all the assistant directors, stage managers, and cameramen for making us all look good; to Mercee Gonzales, our business head, for keeping cool and calm in this pressure cooker called “The Voice”; to all our writers led by Aol Rivera, and especially those on Team Lea this season, namely Waldo Bautista, Dave Oscar and Camille Cruz for their suggestions, commentary and all-around badass-ness; to the entire sound department led by audio director Tom Brickhill for keeping the whole show sounding wonderful; to our individual glam teams, especially mine composed of Kusie Ho, John Lozano, Claire Diokno, Angel Jamelarin, Arianne Antonio, Bren Sales, and all their associates and assistants; all the executives at ABS-CBN and Resorts World Manila for their never-ending and continued support.

Okay… shall we all do it again next year?

During the grand finale, Bamboo, Sarah and yours truly performed a brand-new song titled “Sariling Awit Natin,” written by Yeng Constantino and Jonathan Manalo (and Bamboo wrote his verse to the song). It has been on LSS mode in my head for the last 72 hours. It was very exciting to debut a brand-new song for this season!

Thank you again, Yeng and Jonathan! It was such a privilege and pleasure to sing your song.