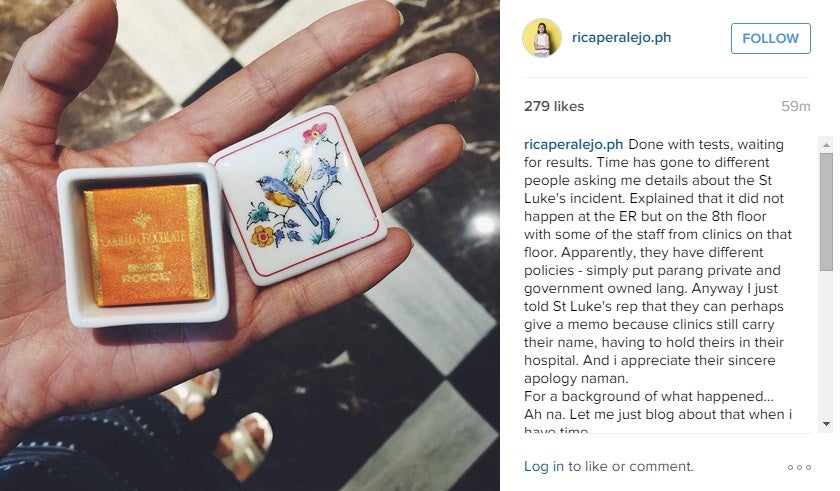 Actress-host Rica Peralejo on Tuesday took to social media to share her frustration over “unprofessional nurses and staff” of a hospital in Taguig City.

In a Facebook post, Peralejo said personnel of St. Luke’s Hospital at Bonifacio Global City wanted to take a photo of her despite the fact that she was not feeling well.

“I find it absolutely unprofessional that nurses and staff in the hospital will want to take my photo ONE BY ONE despite the fact that I am here precisely because I am not feeling well. Hospital: St. Luke’s BGC,” Peralejo said.

In a separate Instagram post on Wednesday, the celebrity mom said the incident took place at the 8th floor of the hospital, which houses several clinics.

“Done with tests, waiting for results. Time has gone to different people asking me details about the St. Luke’s incident. Explained that it did not happen at the ER but on the 8th floor with some of the staff from clinics on that floor. Apparently, they have different policies,” she said.

Peralejo said the hospital management apologized to her for what happened.

“Anyway I just told St. Luke’s rep that they can perhaps give a memo because clinics still carry their name. And I appreciate their sincere apology naman,” she said.

But the actress did not elaborate what happened, saying that she will just write about it on her blog when she has time.

“For a background of what happened… Let me just blog about that when I have time. For now I am still so sad that I cannot drink coffee,” she added. YG/JE