Boots and King: Senior sweethearts inspire, one year into ‘forevermore’ 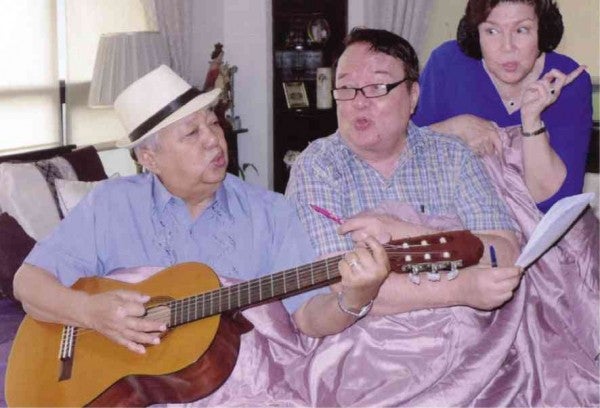 When the country’s “senior sweethearts,” Boots Anson-Roa and King Rodrigo, got married a year ago, I celebrated their marital union as a much-needed inspiration for older folk to also redefine for themselves the meaning of love, constancy and “forevermore.”

True enough, the newly minted Mr. and Mrs. Rodrigo did inspire both old and young Filipinos to optimistically reconsider their options and prospects when it came to matters of the heart.

But couldn’t it have been mostly theoretical on the couple’s part? What are their actual findings and conclusions a full year after “senior marriage”?

And to make sure I’d get “the truth and nothing but” (well, King is a big-time lawyer), I made the admittedly unusual request to spend a full day and night with them. Gamely, after making sure I wasn’t spending it “between” them, they agreed!

This was my first time to interact with King and Boots as a married couple for an extended period of time, so I made sure I paid attention. So, what were my findings?

First, and most importantly, the still relatively new couple looked genuinely and comfortably happy together. Even after a full year of marriage, they still couldn’t stop smiling—no, grinning, as in from ear to ear. How do they do it? I sensed a vital and constant feeling of gratitude from both that, at this late stage of their lives, they have been given (or have opted to give themselves) this new opportunity to be happy—together.

I’d like to underscore the word comfortably. In the thrillingly romantic past, when they were newly affianced and then married, they were quite understandably giddy with happiness. After more than a full year of that, they are obviously still happy but now, comfortably so with the avid exclamation points of joy replaced by a simple but still pleasurable period.

They’re grateful because they were previously both sad, lonely and widowed. But unlike many who accept this “final” stage of life for all sorts of “logical” reasons, they chose to try to be happy again, even if this new “tomorrow” may no longer be “forever.”

No, edit that: This new shared chapter is such a gratifying gift from day to day that, in their view, it doesn’t need a lifetime of tomorrows to make it even more special than it already is!

If happy no longer has to be giddy, could it also sometimes be—less than perfect? “Of course!” they both affirmed feistily.

So what do they do when their being imperfect gets to be a bother and even a pain? They agree to not sweep the current irritant under the rug and hope it will just go away. They make sure they resolve it before they sleep—in each other’s forgiving and understanding arms. If they still can’t do that, they stay awake and rediscuss it—until a bedtime embrace is feelingly achieved.

At this point, I raised a quirky question: Boots is “famous” even among her closest friends for being “perfect.” So, what has her new husband found to fault her with? Instantly, an “if you only knew” look darted through both their faces.

King hastened to explain: Sometimes, it’s Boots’ vaunted perfection itself that becomes the problem—she sacrifices her own interests for everybody else—and he no longer wants her to do that, at least not all the time.

Boots has been the breadwinner for her loved ones and even for some “extended” beneficiaries. Now that she’s Mrs. Rodrigo, however, she has had to adjust to being cared for by her husband—and sometimes, it hasn’t been easy. Perhaps, the key is for Boots to realize that the situation has drastically changed, and that King regards it as his privilege to take care of her for a change?

What made Boots choose to marry King instead of her (many) other suitors, some of whom were similarly outstanding and attractive in their own right? The question had always stumped me in the past, but I finally saw the light just before I had to hand back my Rodrigo family pass:

Unlike some of Boots’ other senior suitors, King is a poet. He courted Boots (and other members of her family) with poems, a unique approach that turned out to be most effective. His penchant for poetry also reveals his love for his late, great father, former Sen. Francisco “Soc” Rodrigo, an even more well-known poet and national icon. In fact, King loved his dad so much he even accompanied Soc when he was captured at the onset of martial law and locked up as a political prisoner.

These days, King’s other great love is his mother, Remedios, who’s turning a still lovely, venerable and herself iconic 101. King dotes on his mother so much that he and Boots make it a point to hear Mass with her daily at the Mt. Carmel church.

As I heard Mass with them, I savored the unusual beauty and grace of the experience and got yet another valuable insight into what made lawyer Rodrigo the King of Boots’ heart of hearts: The son of wonderful parents, how could King not turn out to be an exceptional man himself, innately ardent and lovable enough to make the then already resigned and philosophical widow stir from the sacrificial acceptance of her fate and lot, and—heart beating excitedly again—ask herself, “Why not?”

Quite unexpectedly, one of their union’s strongest links turned out to be humor. This discovery comes way out of left field, because in all the decades I’ve known Boots, I’ve never felt that fun and laughter were among her strongest suits. She was never boring, and the way she cared for family and friends was most comforting and pleasantly reassuring. But Boots as the life of the party? Hmm, I guess I never attended that celebration.

Now that she and King have belatedly seen each other in a new light (they’ve been friends since way back), she has been “infected” by the “virus” of humor that he apparently loves to spread—and she’s become a brighter, lighter and blither person for it!

When they’re together, and even in her relationships with others, Boots is now less careful about observing “the proprieties,” and sometimes enjoys going off on a comedic lark, cracking jokes and making “risky” remarks and observations, a few of them even a tiny bit racy and sexy.

Some people may find this constant display of septuagenarian humor a bit surprising, but I quite like it! Thanks, King, for adding poetry and fun to our “old” friend’s now eventful—and grinning—existence.

When we finally got home that night, we got to know the Rodrigos in yet another context: by sitting in on their meeting with a group of young entrepreneurs they were mentoring. Boots’ son, Joey, was a part of this small group that seeks to help raise the quality of teaching in this country. Everyone present clearly benefited from their volunteer mentors’ suggestions.

The mentoring session didn’t take all that long, but it did show me how the Rodrigos work together as teachers and mentors. In those roles, I saw a difference in King’s approach from Boots’—he was better at time management and the meeting was more productive and consequential due to his proactive handling.

At breakfast the following morning, I asked them to articulate their fears and focus on the potentially touchy topic of age-related illnesses and their threat to the future prospects of senior couples. Candidly, they spoke as one and said they knew that the loving spirit may be willing and even eager, but the body can be weak. But they decided to get married just the same, pray for a long and happy future together, and go on a new adventure where more “realistic” people, and even angels, fear to tread!

Prayer—that was the key link I felt had been missing in my understanding of their unique and “improbable” relationship. Boots and King are having a better chance at happiness than some other seniors because they’ve always been prayerful—separately before, and now together. The daily Masses, the complete trust in God’s will, these are their union’s unique strengths. So, if other widows, widowers and “old singles” want to also be happily in love in their sunset years, they should, first and last, strengthen their faith and practice what they preach on a daily basis.

Finally, what about that part of marriage that people have been speculating about in whispers—the physically loving and sexy part of senior romance? Coyly, I asked: “Do you shower together?”

The King and his Boots look at each other meaningfully, and respond as one: “Yes!”