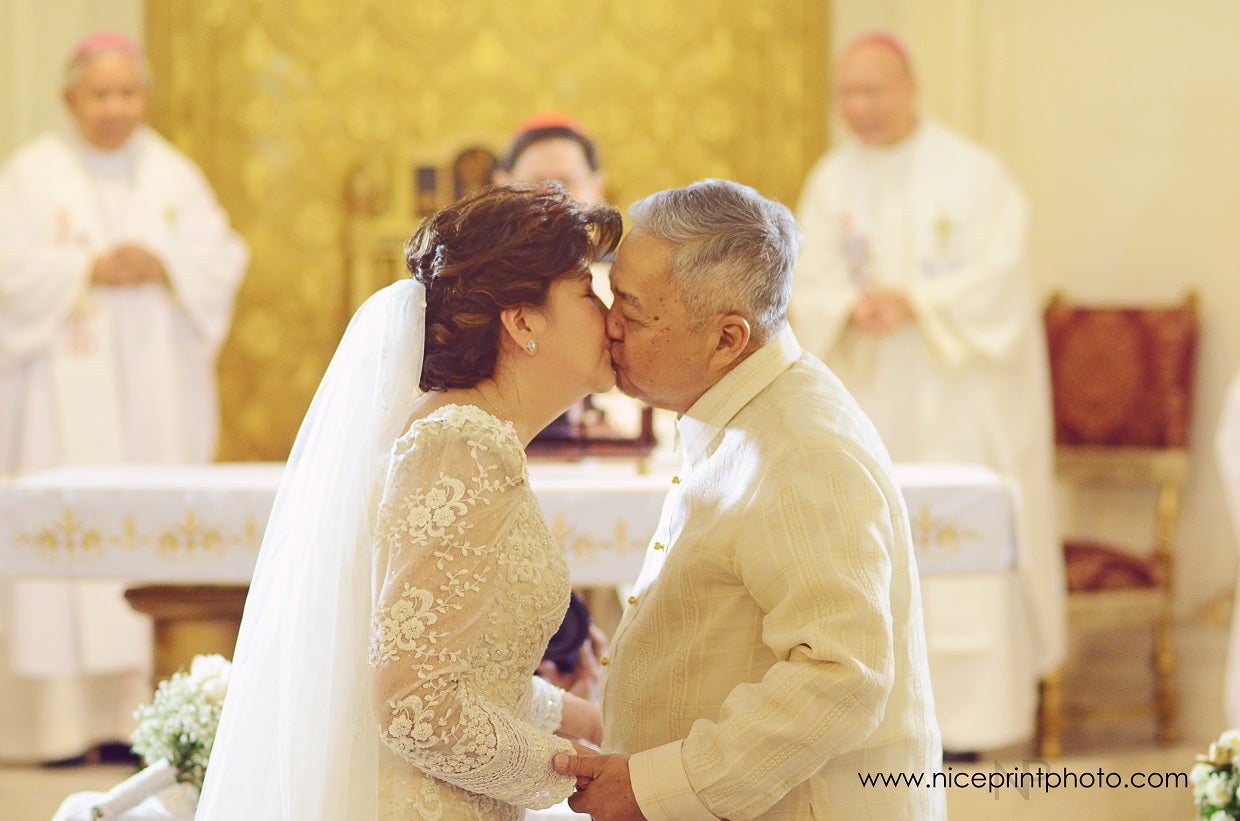 MANILA, Philippines—”Refrain from giving kisses that will increase each other’s blood sugar level.” This was Manila Archbishop Luis Antonio Cardinal Tagle’s advice to Francisco “King” Rodrigo and Boots Anson Roa before he proclaimed them man and wife on Saturday.

“Do you really want to get married? This is the last time I will ask you this question,” said Tagle during the Mass at the Archbishop’s Palace in Mandaluyong City.

He disclosed that, prior to the wedding ceremony, he  received a text message from Roa inviting him to celebrate the couple’s silver wedding anniversary, as well as the baptism of their would-be son Jonjon. “Do you see the spirit of these persons? They never give up,” he told guests inside the 70-seat chapel. “See you again here in 2039! We are all blessed to be a part of this wedding.”

Roa glowed in her ecru gown as she alighted from the vintage Ferrari bridal car around 5:15 p.m. She walked on a carpeted path under white orchids and then met her sons Joey and Ben before entering the chapel.

Rodrigo’s 99-year-old mother Remedios walked with him to the altar. 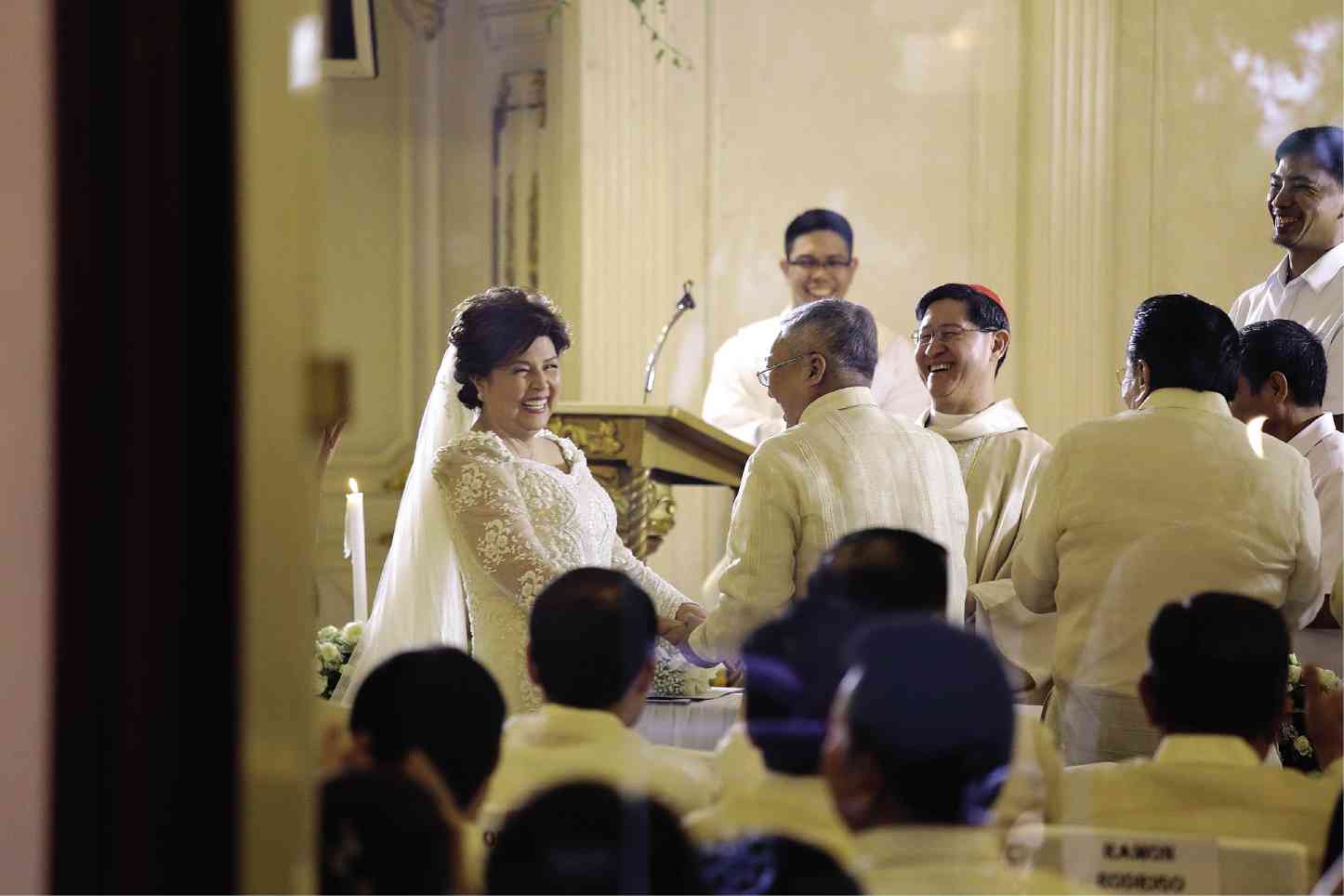 LOVE LOVELIER (FUNNIER, TOO!) THE SECOND TIME AROUND Actress Boots Anson-Roa and lawyer Francisco “King” Rodrigo Jr. let out a hearty laugh after exchanging “I do’s” in rites officiated by Manila Archbishop Luis Antonio Cardinal Tagle at the Archbishop’s Palace at Villa San Miguel in Mandaluyong City on Saturday. At right is ex-President and now Manila Mayor Joseph Estrada, one of the principal sponsors. JILSON SECKLER TIU

Unlike  most weddings, there was no traditional bridal bouquet toss after Roa tied the knot with Rodrigo on Saturday afternoon. This was because Roa had planned to bring the bouquet the morning after to the crypt of her first husband Pete, with whom she was married from 1964 until his death in 2007.

“We would also visit the crypt of King’s first wife Olga. We’ve done this at least three times already. The first was when King gave me my engagement ring (in November 2013),” the actress told the Inquirer days before the ceremony.

Rodrigo is an international lawyer and a former Philippine consul general in the United States. He is the son of the late Senator Francisco “Soc” Rodrigo. He and Pete Roa were classmates in high school.

Rodrigo celebrated his 75th birthday on his wedding day. He explained to the Inquirer the significance of marrying his 69-year-old fiancée.

“Many of our friends tell us, ‘At your age, magsama na lang kayo.’ To the young ones, it’s called ‘MOMOL’ or ‘make-out make-out lang,’” he said.  “A relationship, as far as Boots and I are concerned, must help both parties. If we’d pursue this love without the benefit of marriage, we would be living in sin. I will not go into a relationship only to be damned to hell.”

Rodrigo recalled an incident at the Movie Workers Welfare Foundation or Mowelfund, which Roa chairs.

“She organized a mass marriage program for those who are living together without the benefit of marriage. Do you know that no one attended? Not a single pair! That shows you the mentality of some Filipinos—that marriage is no longer important.”

Rodrigo admitted he was nervous as he watched his bride marching down the aisle.

“I’ll be less than candid if I don’t say I was a little bit anxious. Yes, I’ve gone through it before, but that was 54 years ago. I was very young then,” he told the Inquirer. “Boots and I have agreed not to stress on the wedding details. Nothing that will happen now will invalidate the wedding—that’s the most important thing. There’s no more panic.” 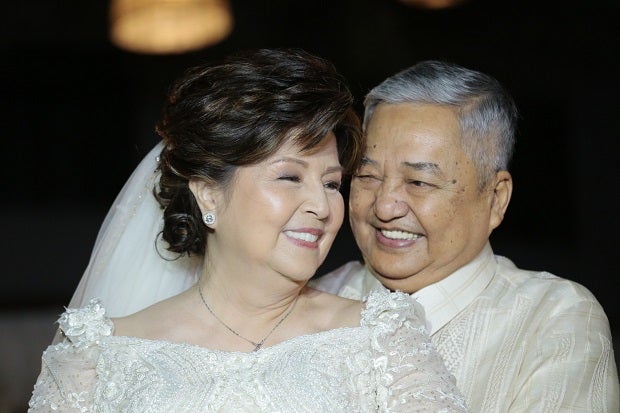 TV host Chiqui Roa-Puno, Boots’ daughter observed: “I can see that they’re genuinely happy. I’m just thrilled about how my mom has that bounce on her step and that glow in her eyes at her age. I hope that because of her, other women will become more inspired and feel better about their lives, too.”

Puno was one of her mom’s matrons of honor, along with Vicky Anson-White, Leah Roa-Cuevas, Josefina Rodrigo and Elizabeth Velez.

Puno said her “Tito King” was “so easy to like.” She added: “He fit right in to the family. He made it very easy for us to accept this union. I think as time goes on, as they become really a part of each other’s lives, he will realize that he made a very good decision marrying mom.”

Eddie Baddeo designed the bridal gown, a classic princess-cut design with long sleeves made of ecru piña silk and heavy lace. Roa also wore a piña silk underskirt with metallic mesh lining and a short fishtail. It was embellished with caviar and rhinestone beads and had a short veil. The bride wore a pair of low-heeled pumps. The groom’s barong Tagalog was also designed by Baddeo.

“Ma’am Boots is one of my first bosses. I was just 18 when I started working for her,” said Baddeo, as he recalled his years working for the family-owned garment factory Trade House Inc., which made clothes called Boots on the Racks.

“The wedding gown is my way of expressing my gratitude to her,” Baddeo said. “Ma’am Boots’ requests were quite simple. She didn’t want the neckline too low and didn’t want her hips to be emphasized. We go a long way back. I’m already familiar with her body contour and know which parts I should hide and accentuate.”

The reception was held at the Wack Wack Country Club, also in Mandaluyong City.

Floral decor at the church was by Elaine Rojas Villar and Jun Han. Purple was the color motif.

The poems that Rodrigo wrote for Roa were compiled into a book, which was among the giveaways at the wedding.

“I’ve always loved writing poems. I stopped writing when my first wife died. I began writing again when I met Boots—she became my muse. I’m into a form of poetry known as awit. It is metered and rhymed. It has six syllables per thought and 12 syllables per line,” Rodrigo said.

Roa said she would still keep her screen name after the wedding. “King told me, ‘Don’t retire. Keep using Roa.” Rodrigo added: “This was because she has worked hard to put value and goodwill to that name. Privately, she is Mrs. Rodrigo. This doesn’t diminish my love for her.”

Roa teaches mass com at the Ateneo de Manila University, University of the Philippines and Manila Times School of Journalism. She cohosts the Sunday program “Music and Memories” with Willie Nepomuceno aired simultaneously over dzMM and Channel 26.

“I think this new union will stand for something else,” Puno said. “It will sooner or later have its own meaning, it’s own identity. It doesn’t have to take the place of what Mom and Dad had.”

The newly-weds were to move into Roa’s apartment in Quezon City.

“She finds my house in Alabang too far away. I told her, ‘I’d buy the place from you nang hindi mo naman sabihing binabahay mo ako.’ She didn’t agree. It’s not really a big issue. It just feels good—the macho image and all” Rodrigo said.