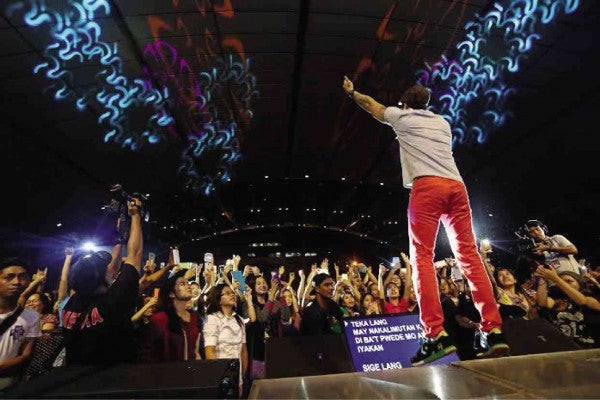 TUTTI Caringal of 6cyclemind revs up the crowd.

That we were able to pull this off despite our limited time and resources is really fulfilling,” singer-songwriter Noel Cabangon said of the second Pinoy Music Festival, which coincided with the inaugural observance of the Linggo ng Musikang Pilipino from July 25 to 31.

Cabangon, the festival director, described the weeklong musical celebration as “very successful.” “We would’ve loved to have a bigger celebration, but we did the best we could. I hope we do even better next year,” he told the Inquirer.

Through Proclamation No. 933 signed by President Benigno Aquino III in 2014, the last week of July of each year has been declared Linggo ng Musikang Pilipino to develop, promote and foster appreciation for original Filipino music and to revitalize the local music industry.

Tasked to spearhead the advocacy are the National Commission for Culture and the Arts and the Organisasyon ng Pilipinong Mang-aawit (OPM). Cabangon is OPM vice president for external affairs.

Throughout the Pinoy Music Festival, various music-related events were held across the metro: mall and school shows, street performances and bar sessions; My OPM Playlist exhibit at Bonifacio High Street Ampitheater; and the OPM Music Marathon at the Quezon City Memorial Circle.
“Everything turned out well; a lot of people attended the shows,” said Cabangon, who also heads the Filipino Society of Composers, Authors and Publishers. “Seeing artists up close on the streets was a surprise for the people.” 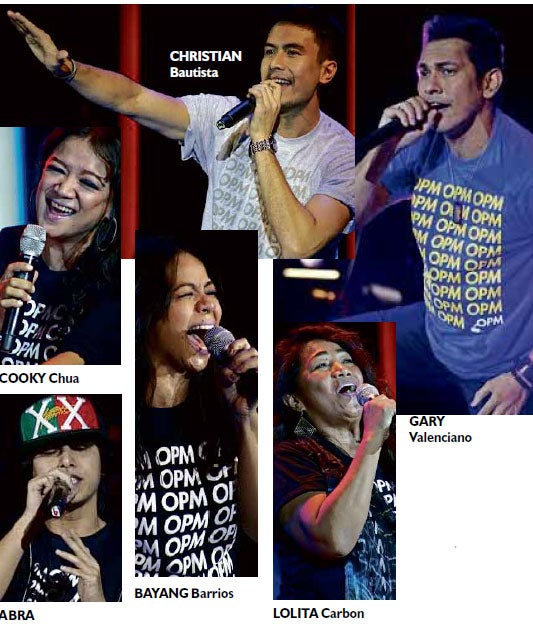 “It was very heartening because we didn’t have to convince these artists to join us; they were all very willing. Some, like Quest, even volunteered,” Cabangon said.

The night’s highlights were the numbers of Wolfgang’s Basti Artadi and Lolita Carbon who veered away from their usual to perform mellow songs: the heavy-metal band front man regaled the crowd with “Natutulog ba ang Diyos”; the Asin lead vocalist, “With a Smile.” The show ended with everyone singing the late rapper Francis Magalona’s hit “Kaleidoscope World.”

The key to sustaining progress, Cabangon said, was continuity. “We’ll take a few weeks’ break and then try to think of new projects we can mount until next year’s Linggo ng Musikang Pilipino,” he said.