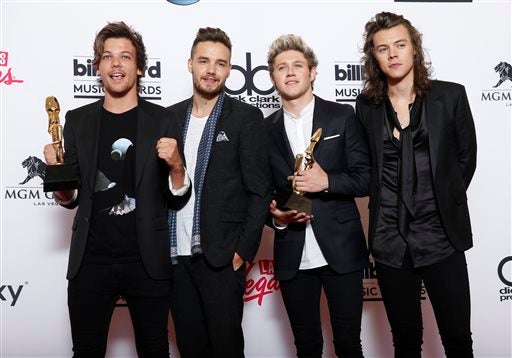 Louis Tomlinson, from left, Liam Payne, Niall Horan, and Harry Styles of the musical group One Direction pose in the press room with the awards for top duo/group and top touring artist at the Billboard Music Awards at the MGM Grand Garden Arena on Sunday, May 17, 2015, in Las Vegas. AP

LONDON, United Kingdom—A member of British-Irish pop phenomenon One Direction on Monday denied press reports the band was to split, saying instead the group is to take a “break” in 2016.

“Ok so lots of rumours going round. We are not splitting up, but we will be taking a well earned break at some point next year,” Niall Horan, 21, a member of the four-piece boyband wrote to his 23 million followers on Twitter.

“Don’t worry though, we still have lots we want to achieve!”

The comments followed a report in British newspaper The Sun citing a “1D source” that the band was to separate for at least a year, which left the band’s enormous global teenage following devastated.

“The guys have been together for five years, which is an incredible run for any boyband,” said The Sun’s source.

“They fully deserve to have at least a year to work on their own projects. There is absolutely no bad blood between them and they are all 100 percent behind the decision.

“It is definitely not a split and they fully intend to get back together at some time in the future.”

A spokesman for the band had declined to comment on the report.

Bee @hellobee added: “WHAT IS THIS NEWS ABOUT ONE DIRECTION SPLITTING UP IM DYING IN THE GROCERY STORE OMG.”

Battle-hardened fans offered advice to those going through their first boyband split.

“It’s ok One Direction fans, I went through this with Take That &amp; Boyzone,” wrote Twitter user @LisforLia.

“You may feel like your heart is in a blender, but you can do this.”

The band is due to release its fifth album before Christmas, and fulfil promotional commitments by the end of February, the report said.

There is no tour scheduled for the new album.

One Direction’s last scheduled concerts are at the Sheffield Arena in northern England on October 29, 30, 31.

They are currently touring North America and are due to perform in Milwaukee, Wisconsin on Tuesday.

The chart-toppers have sold more than 50 million records around the globe.

Malik quit the band in March, shortly after being signed off with stress.

“I am leaving because I want to be a normal 22-year-old who is able to relax and have some private time out of the spotlight,” he said at the time.

The Sunday Times newspaper’s Rich List 2015 reckoned the band members were worth £25 million each.