Will Korean dramas break away from ‘live-shoot’ system? 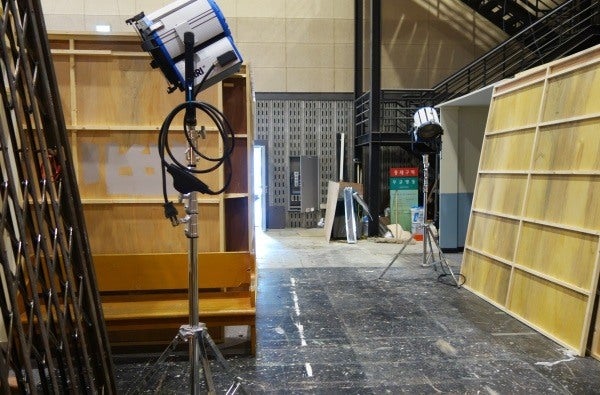 The filming culture for South Korea’s soap operas has become notorious for its harsh conditions.

Though making a TV series is considered a laborious endeavor in most parts of the world, the shooting of Korean dramas in particular has gained notoriety for its hectic filming schedules, harsh conditions, and last-minute script changes.

The currently running JTC series Last is the exception, going the pre-shooting route, still a rare practice in the production of TV dramas in Korea.

Actors from the series have admitted they could not be happier with their new work environment.

“The environment is superb,” actor Yoon Kye-sang said in a group interview on set in Anseong, Gyeonggi Province. “The scripts are out early, so the actors have enough time to delve into their characters.”

“I’ve learned what it feels like to work on a project that is well prepared and reasonably scheduled,” she said. “Most of the times (when working on other shows), I’m clenching my teeth to get through the shoots, with no idea what I’m doing. I didn’t know shooting a drama series could be this great.”

The majority of Korean dramas are produced in what has been called a “semi-live show” format, with episodes being scripted, shot and edited mere days before their airing — practices undoubtedly alien to the US or UK, where entire seasons are produced a few months to a year before their broadcast.

In the hectic schedule, actors confess they find it hard to focus on their characters.

“We weren’t rushing through shoots and sacrificing quality (when filming Last), as happens in most drama projects,” said actor Lee Bum-soo.

“The scripts for the first eight episodes were already out from the start.”

These comments are in stark contrast with more common depictions of Korean drama shoots and many prior instances of on-set conflicts.

Only last month, actor Jung Woong-in described the conditions on the set of SBS drama Yong-pal as: “the worst.”

“Because we started (shooting) late, the production staff is getting almost no sleep,” Jung said at a press conference.

In May, actress Kim Sun-a was mired in controversy after expressing strong discontent with the incessant schedule rearrangements for the shooting of the KBS series Masked Prosecutor.

In the 2008 MBC series East of Eden, actress Lee Da-hae dropped out from her role as female lead Min Hye-rin, citing physically tasking conditions and “incomprehensible” character developments as the reasons behind her decision.

The reasons behind the tight Korean shooting schedule, some reports say, lie in the desired flexibility to respond to viewer feedback. Because the process of shooting and airing simultaneously allows writers to change storylines according to viewer preferences, it ultimately results in better ratings and profits for the show, they say.

Park Joon-seo, the chief producer of Last, says the reasons are more complicated. He sees the delay in production as more a “matter of big decisions being held off until the last moment.”

“There are so many factors and conflicts of interest involved in planning a show” — from adjusting actors’ schedules to lining up producers, writers, cameramen and staff, landing a time slot, booking locations and procuring investment — “that things simply can’t get decided ahead of time.”

But because JTBC is still relatively in its nascent stages — the channel was launched in 2011 — and because it is currently producing only a small number of drama series, the network has been able to create its own production system from scratch.

“Our focus is on making high-quality content through carefully planned pre-production,” Park said. “I understand there are certain benefits that can come from the energy of real-time production, but it always ends up sacrificing quality. And quality is what lasts,” Park said.

TV series are not only watched as they are being aired, but continually recycled via internet streaming and overseas distribution.

Unfortunately, happy actors do not always result in happy viewers, it seems. Pre-shot dramas have gained another sort of infamy in Korea — though applauded for their high production value, they have oddly been proven to be less popular. One example is the 2010 MBC series Road No. 1, whose ratings averaged around six percent while its competitors at the time saw figures of over thirty percent.

Meanwhile, a number of much-anticipated dramas lined up for the latter half of this year, such as Cheese in the Trap and Saimdang, the Herstory featuring Lee Young-ae, have opted to pre-shoot, gathering attention as to whether the process will finally be able to satisfy actors, viewers and investors all at once.