Cinemalaya goes back to basics

It was actually the short filmmakers who pioneered what we now know as indie filmmaking,” said Chris Millado, newly appointed festival director of the annual Cinemalaya Philippine Independent Film Festival, which is ongoing until Aug. 15.

Since 2005, the Cinemalaya has featured full-length films by young directors under its New Breed category; and since 2010, works of veteran filmmakers. For its 2015 edition, however, the competition will be for the short film category only.

“They are the original indie directors when we still didn’t have digital technology,” said Millado, also the artistic director of the Cultural Center of the Philippines (CCP), the Cinemalaya’s home for the past decade.

“A lot of our indie directors started in short filmmaking, and we recognize that short filmmaking is a genre on its own. It has a structured storytelling that also needs to be showcased and appreciated. Thus, this year, as we have done in so many years, we give a special focus on the shorts in competition,” Millado said. 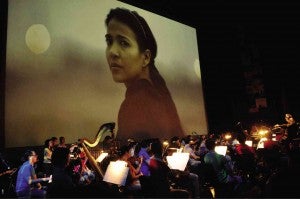 THE 2015 edition of Cinemalaya will screen the best films of the past decade. A scene from the 2012 entry “Sta. Niña,” featuring Alessandra de Rossi, was shown during the opening ceremony. Photo by Kiko Cabuena

The competition process for the full-length feature category is ongoing and the screening of the competing films will be in August 2016. The complete list of the 2016 finalists will be announced during the festival’s closing night.

Millado said that after a decade, Cinemalaya organizers have reaffirmed their “commitment to serve and inspire Asian filmmakers by showcasing the country as the cinematic center of creativity and free artistic expression.”

He added that on Cinemalaya’s 11th year, it would focus not only on its strength as “provider of Filipino creative content,” but also on being “a platform to serve as inspiration to the broader Asian community.” 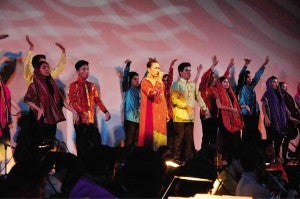 Millado promised that Cinemalaya would remain committed to the “professionalization of film practitioners in various aspects of production.” He also pointed out that the Cinemalaya Film Institute, launched in June, has finished training its first batch. “We have a course in producing, scriptwriting and directing. We hope the Institute produces a new breed of filmmakers who will continue to contribute to festivals, both local and international.”

He then explained this year’s theme, “Broadening Horizons”: “We are planning again, revisioning, so that the Balanghai will set sail again and make bigger journeys in the next 10 years.”

The Balanghai, a large boat used during pre-Hispanic times, is the Cinemalaya’s symbol.

Cinemalaya will also be screened at the Greenbelt Mall in Makati City. This year’s closing film is the psychological thriller “Silong,” starring Piolo Pascual and Rhian Ramos. It is co-directed by Jeffrey Hidalgo and Roy Sevilla Ho.

At the festival’s opening on Friday, Cinemalaya Foundation president Laurice Guillen, explained in her speech “why certain changes had to be undertaken” during the 2015 edition.

She said: “We looked into our films from the past 10 years to see how they met our mission to ‘discover, encourage and honor cinematic works of first-time filmmakers that boldly articulate and freely interpret the Filipino experience with fresh insight and integrity.’ We have seen how the New Breed have learned control over their material. We have seen their brave exploration into new subject matter and unique storytelling styles. We have seen how the films have technically evolved from DVD and mini-DV in 2005 to DCP in 2014. 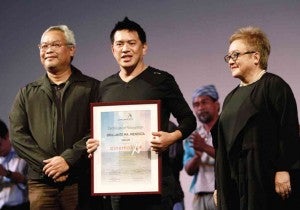 “We have seen the interest and curiosity in our films nationally, regionally and internationally; for though we may not produce the best films, Cinemalaya’s voice is clearly unique in its creative freedom, its socio-cultural impact and its independence of spirit… These observations point us to our directions in the next 10 years… Clearly some changes had to be made.”

She then discussed Cinemalaya’s move to showcase regional films “that boldly articulate and freely interpret the Asian experience.” She also talked about the new section on Asian films curated by the Netpac (Network for the Promotion of Asian Cinema), as well as the newly launched Cinemalaya Institute.

It is currently “a transition year,” according to Guillen. “[Cinemalaya’s] existence is possible through the men and women [of] the Cinemalaya Foundation and the CCP whose partnership and commitment have made dreams possible,” she said. “The continuation of Cinemalaya would not be possible without the films and their audience, whose dynamic exchange has given Cinemalaya its spirit. They are the wind that fills and propels the sails of our balanghai.”

Award-winning filmmaker Brillante Ma. Mendoza, director of the opening film “Taklub,” said the night’s screening was special in the sense that the Cinemalaya “is being patronized by indie filmmakers like me and of the alternative audience, which is really the target market of this movie.” 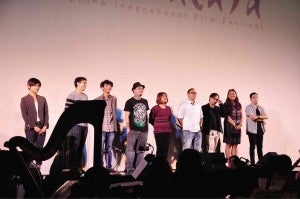 FINALISTS in this years’s short films competition are introduced.

“I think what we have here is the first full-length advocacy film funded both by the DENR (Department of Environment and Natural Resources) and the PCOO-PIA (Presidential Communications Operations Office-Philippine Information Agency). I developed the narrative, but it’s still on disaster risk management.”

Mendoza received a certificate of recognition from Millado and Guillen.

Mendoza will leave for Sarajevo in Bosnia and Herzegovina next week to attend a festival where he will be given a tribute, he related. A retrospective of his works will also be featured in two festivals in Russia in September. In October, he will be the “Director in Focus” at the 2015 Tokyo International Film Festival.