Television host Willie Revillame is keeping his fingers crossed that “Wowowin’s” recent move to an earlier time slot would resuscitate the struggling Sunday variety show, which nearly went off the air prematurely, and has so far cost him about P50 million.

“Wowowin” started airing at 2 p.m. Sunday—a welcome change, Revillame said, because the GMA 7 program’s initial 3:30 p.m. schedule wasn’t attractive to the advertisers that are considered the lifeblood of media.

“Our rating was averaging five to six percent, which isn’t bad for a Sunday afternoon show. But I believe we can do better if we have a better slot,” Revillame told reporters at a press conference.

Mounting “Wowowin” is an expensive undertaking, especially since Revillame has to buy air time—allegedly worth P2 million—from the Kapuso network. But with the show’s lack of commercials, the controversial celebrity said he waived his talent fee and was forced to spend his own money to keep the ball rolling.

The first episode alone, which aired last May 10, cost P13 million. “We weren’t supposed to air anymore last Aug. 2, because things were tough for us financially,” he said. “Abonado ako. Aside from the production, of course you have to continue giving prizes despite the lack of sponsors.”

Revillame could have stayed in Tagaytay to oversee the construction of his boutique hotel there, if Joey Abacan, GMA 7 vice president for program management, hadn’t intervened. “He told me not to leave yet, because they didn’t want the show to go to waste. And so we talked,” he said. 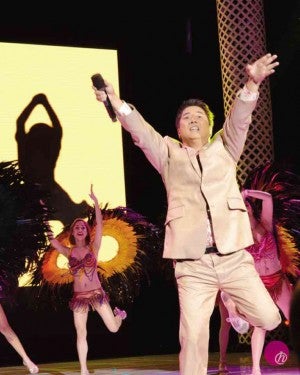 As a result of the meeting, “Wowowin” was put back-to-back with “Sunday PinaSaya” and was given a free, 15-minute extension, beefing up the show’s total running time to one hour and 15 minutes. Revillame was also given an air time “discount,” an amount he didn’t disclose.

“I didn’t demand any of these—they gave them to me wholeheartedly because the execs wanted me to continue helping and giving joy to people,” related Revillame, who announced last March that he was making a comeback after a year-long hiatus from show biz.

Asked why he continues to gamble on producing his own shows, when he could play it safe and work as a network talent, the 54-year-old celeb said it was his way of giving back to the people who have helped him attain success.

“I don’t care about money or making a profit anymore. Serving the people is what’s important. After all, I didn’t have all these things before I started doing this,” Revillame said, adding that his goal right now is simply to break even so he can sustain “Wowowin.”

And should things go well, he said, maybe he could start thinking about the possibility of turning “Wowowin” into a daily program, like what he always wanted. “‘Eat Bulaga’ has a lock on the noontime slot. I can go at 5:30, before the evening news,” he said.

Meanwhile, on talks that he’s being courted by a political party to run for the Senate in next year’s election, he jokingly quoted Sen. Grace Poe: “Pinag-iisipan (I am thinking about it).”

“I didn’t flat-out decline; I told them that I’d think it over. This is no joke. What will I do in the Senate? I don’t know anything about lawmaking,” Revillame admitted.

The only law he knows, he said, is the most important of all: “The rule of helping others sincerely, of having a good heart.”