Zedd: PH has a special place in my heart 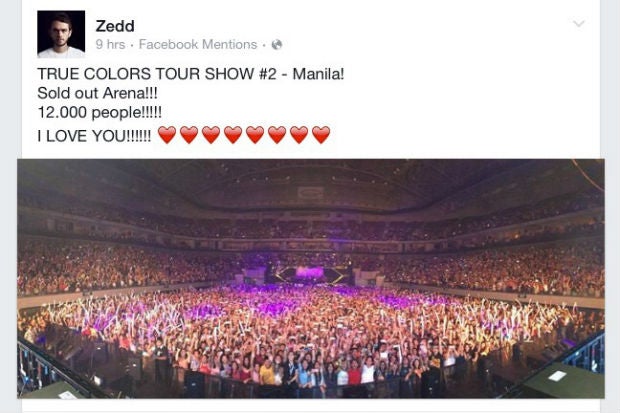 It was his fourth visit to the Philippines, but for Grammy-winning DJ and producer Zedd, there will always be something exciting to look forward to every time he comes to the country.

Zedd, who rocked the SM Mall of Asia Arena on Saturday night for “Neverland Manila presents: Zedd True Colors Tour,” said every concert in the Philippines is a new experience for him.

“I’m always excited to be here. When people ask me in interviews where I love to play I will always mention the Philippines because it has a really special place in my heart for sure,” he said in an interview with reporters before the concert.

Anton Zaslavski in real life, the 25-year-old Russian-German musician said the Filipino fans’ love and support for his music would always attract him back to the country.

“I’ve been coming back for a reason. I’ve always been seeing a lot of passion, a lot of support, a lot of love, and a lot of attention to details as well in the Philippines,” he said.

Organizers earlier said tickets for the concert have sold out, but the management offered additional upperbox-level tickets for the first 500 people who would bring educational assistance (school supplies) and relief (food and toiletries) packs for its “Happiness in a Bag” project.

“And I will always be coming back as soon as people come back for the shows. I’m really excited for tonight. This is one of the biggest shows I have ever played,” Zedd added.

The international electronic dance music superstar also brought in his protege Haywyre in his Manila tour, while DJ Callum David opened for the show.

Zedd is currently promoting his second studio album “True Colors,” which includes his collaborations with various artists such as Selena Gomez and Echosmith, and features chart-topping singles “Beautiful Now” and “I Want You To Know.”

He won the Grammy Award for Best Dance Recording in 2014 for the hit song “Clarity.”