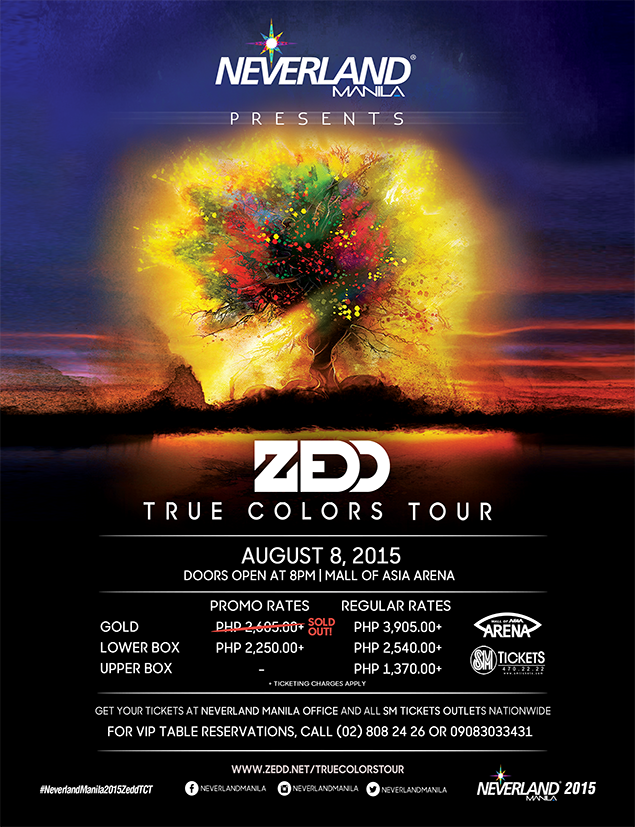 We’re counting the days to the most-awaited concert tour in the world! Are you ready for the best night of your life?

Neverland Manila, with its commitment to provide world-class musical experience to Filipinos, is bringing in the artist that brought you dancefloor hits “Addicted To A Memory”, “Clarity”, and “Spectrum”. Grammy Award-winning DJ/producer Zedd will be performing in Manila for NEVERLAND MANILA PRESENTS: ZEDD TRUE COLORS TOUR.

The “True Colors” album features Zedd’s collaboration with various artists such as Selena Gomez, Jon Bellion, Bahari, Echosmith, and X Ambassadors, among others. Zedd, Anton Zaslavski in real life, has released an album that shows off his versatility and knowledge, not only as a musician but as a producer and hitmaker. He recently released his third single, “Beautiful Now”, currently topping the electronic music charts and raking millions of views on social media sites.

For his fourth visit in the Philippines, he is bringing electronic music protégé Haywyre along to complete the True Colors Tour lineup. A clever combination of Haywyre’s ingenious electronica tunes, Zedd’s superb musicality, and Neverland Manila’s massive production values, Filipinos are in for an unforgettable visual and auditory feast that will surely “light up the skies and open the clouds.”

Dare to show your true colors as Zedd, together with Haywyre, give you one massive performance at the Mall Of Asia Arena on August 8, 2015 at NEVERLAND MANILA PRESENTS: ZEDD TRUE COLORS TOUR.