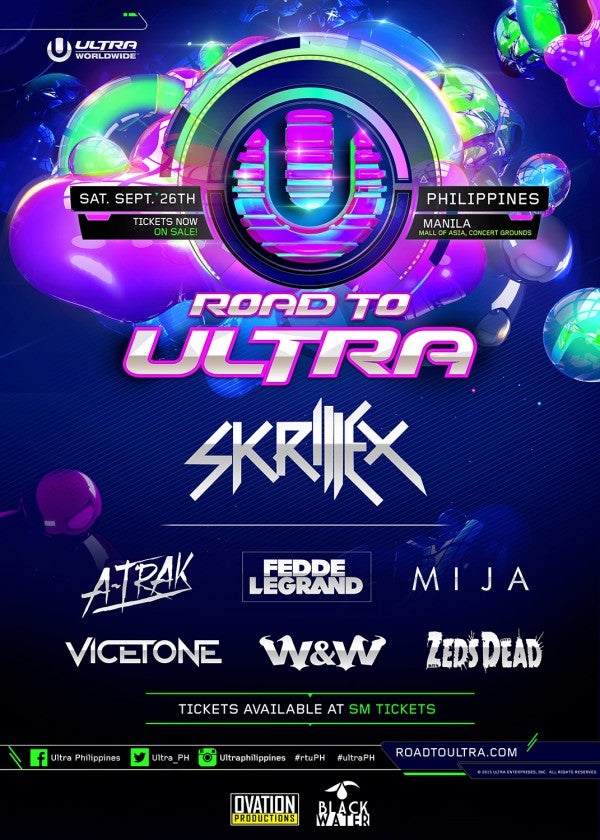 It truly has been a whirlwind month for ULTRA Worldwide. Having hosted the fourth annual edition of ULTRA Korea plus brand new ‘Road To Ultra’ events in Macau and Thailand earlier in June — not forgetting the recent announcements of ULTRA Bali Beach, ULTRA Chile and Road to ULTRA parties in Bolivia, Peru, Colombia and Paraguay—the world’s most international electronic music festival brand now reveals the PHILIPPINES as the next country in an ever-­‐growing number of territories around the world to witness the incredible Road to ULTRA experience!

Taking place on Saturday, September 26, 2015, Road To ULTRA Philippines will welcome upwards of 15,000 guests to the Mall of Asia Concert Grounds in Manila, which, having opened back in 2006, has opened its doors to some of the biggest stars on earth such as Usher, Justin Bieber, One Direction and Katy Perry.

Now, it is Ultra Worldwide’s turn to host the biggest party the Philippines has ever witnessed, and as always, they will be bringing a whole host of superstar performers along the way to join in. The much-­‐ awaited line-­‐up featuring internationally acclaimed artists has been revealed with EDM juggernaut Skrillex as headliner. Joining him on stage are heavy hitters A-­‐Trak, Fedde Le Grand, Mija, Vicetone, W&W, and Zeds Dead in a world-­‐class spectacle that no EDM fan should dare miss. Tickets are now available at SM Tickets Outlets and online at smtickets.com for a Premium General Admission of P5,000 and a General Admission for P3,000.

Road to ULTRA PHILIPPINES is brought to you by Black Water Events Management and Ovation Productions. Blackwater prides itself in bringing a number of international talents to the Manila clubbing scene while Ovation Productions promotes an array or genres of performances from Taylor Swift to Sting concerts to Broadway musicals such as Beauty & the Beast. Ovation is the first concert promotions company that directly buys, promotes, and handles all production aspects of its concerts. They have expanded since 1979 and have been bringing in international artists to perform in the Manila, as well as other provinces. Follow @ovationprod on Facebook, Twitter, and Instagram for more information about The Road to ULTRA and other productions. ADVT.